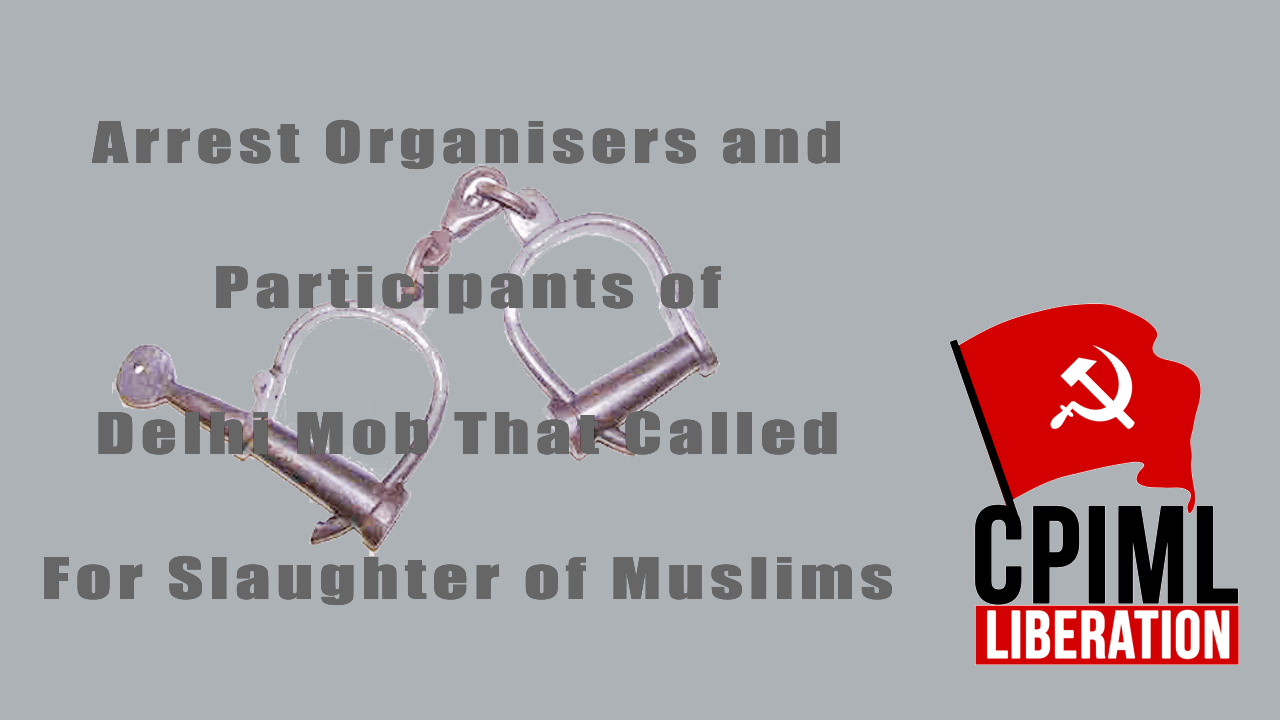 A week before Independence Day, on August 8, a mob of 5000 men led by BJP’s former Delhi spokesperson Ashwini Upadhyay gathered at Parliament Street in India’s national capital Delhi in what they called a “Wake India” event, and raised slogans declaring “When Muslims are slaughtered they will cry out the name of (Hindu god) Ram.” A flyer was distributed by organisers of the gathering asking people to call them if they are interested in the “Annihilation of Islam” The gathering did not have permission from Delhi Police, and yet the police did not disperse, nor detain or arrest a single participant on that day. It is only following widespread protests and demands for action that the Delhi Police has arrested Upadhyay and four others – though it has only invoked relatively weak sections of law against them.

Organisers of the “Wake India” event Preet Singh and Ashwani Upadhyay had announced that they were demanding that the “foreign” legal structure of India be abolished, and a “1000 amendments” be made to the Indian Constitution so as to “lay the foundations of the Hindu Rashtra (Hindu Nation)”. It is clear that by “foreign” laws, these men do not mean colonial-era and colonial-inspired laws like sedition, UAPA, AFSPA. They wish to desecrate the secular, democratic Constitution of India so as to make it compatible with a Hindu-supremacist nation.

It must be noted that Haryana BJP spokesperson Suraj Pal Amu led a mob at Pataudi on July 4 where the same slogan calling for slaughter of Muslims in the name of Ram was raised, and Amu himself said “we know how to cut throats when necessary”. Amu is still the BJP spokesperson and neither Haryana police or India’s Home Ministry have taken any action against him. Clearly the event at Delhi was not a one-off event nor carried out by any “fringe group”. It is India’s Hindutva supremacist ruling party the BJP which is systematically organising and training violent mobs in preparation for genocidal violence against the country’s Muslims.

A violent and dangerous outfit based in a temple at Dasna in Uttar Pradesh’s Ghaziabad district in the National Capital Region, has had a hand in all the anti-Muslim violence in the national capital in the past year. The August 8 mob is no exception. Yati Narsinhanand Saraswati, ‘Mahant’ of the Shiv Shakti Dham Mandir in Dasna, Ghaziabad, has declared that his “followers were present in large numbers” at the event, and has justified the slogans calling for slaughter of Muslims in the name of Ram saying “𝙏𝙝𝙚 𝙚𝙫𝙚𝙣𝙩 𝙬𝙖𝙨 𝙢𝙪𝙘𝙝 𝙣𝙚𝙚𝙙𝙚𝙙 𝙖𝙣𝙙 𝙩𝙝𝙤𝙨𝙚 𝙧𝙖𝙞𝙨𝙞𝙣𝙜 𝙨𝙪𝙘𝙝 𝙨𝙡𝙤𝙜𝙖𝙣𝙨 𝙖𝙧𝙚 𝙟𝙪𝙨𝙩𝙞𝙛𝙞𝙚𝙙 𝙗𝙚𝙘𝙖𝙪𝙨𝙚 𝙃𝙞𝙣𝙙𝙪𝙨 𝙝𝙖𝙫𝙚 𝙖 𝙡𝙤𝙩 𝙤𝙛 𝙥𝙚𝙣𝙩 𝙪𝙥 𝙖𝙣𝙜𝙚𝙧. 𝙏𝙝𝙚𝙮 𝙣𝙚𝙚𝙙 𝙩𝙤 𝙫𝙚𝙣𝙩…” Neither the UP Government nor the Central Government has taken any noticee of, let alone action against Narsinhanand who has openly declared that he runs “arms training” camps for Hindutva supremacists.

The Modi regime is singularly responsible for this openly violent demonstrations in and around India’s national capital. In the course of the past year, a series of BJP, RSS and ABVP leaders and other Hindu supremacist men and women have indulged openly in anti-Muslim violence in Delhi and the National Capital Region, without any action by police and government. BJP leader Kapil Mishra incited anti-Muslim violence in Delhi by calling for Muslims to be shot dead; Ram Bhakt Gopal actually fired a gun at students on the Jamia Millia university campus; ABVP leader Komal Sharma led a mob that conducted a murderous attack  with iron rods on JNU students and teachers; Ragini Tiwari boasted of having led a violent mob that killed Muslims in North East Delhi. No action has been taken by police against Mishra, Sharma or Tiwari; Gopal was briefly arrested on weak charges, and then released on bail. While activist organisers of non-violent protests are being jailed under draconian laws equating protest with terrorism, perpetrators of anti-Muslim hate-speech and violence have enjoyed the impunity and even the patronage of the Government of India led by Modi and Shah.

But the people of India will not sit silent as the BJP and RSS try to turn our country into a “blood-bathed slaughterhouse”. We appeal to people to hold protests on August 11-12 demanding that