CPIML Releases booklet 'Truth of Covid 2nd Wave' and film 'Tragedy of the Century, Lies Told by the Ruling Powers' 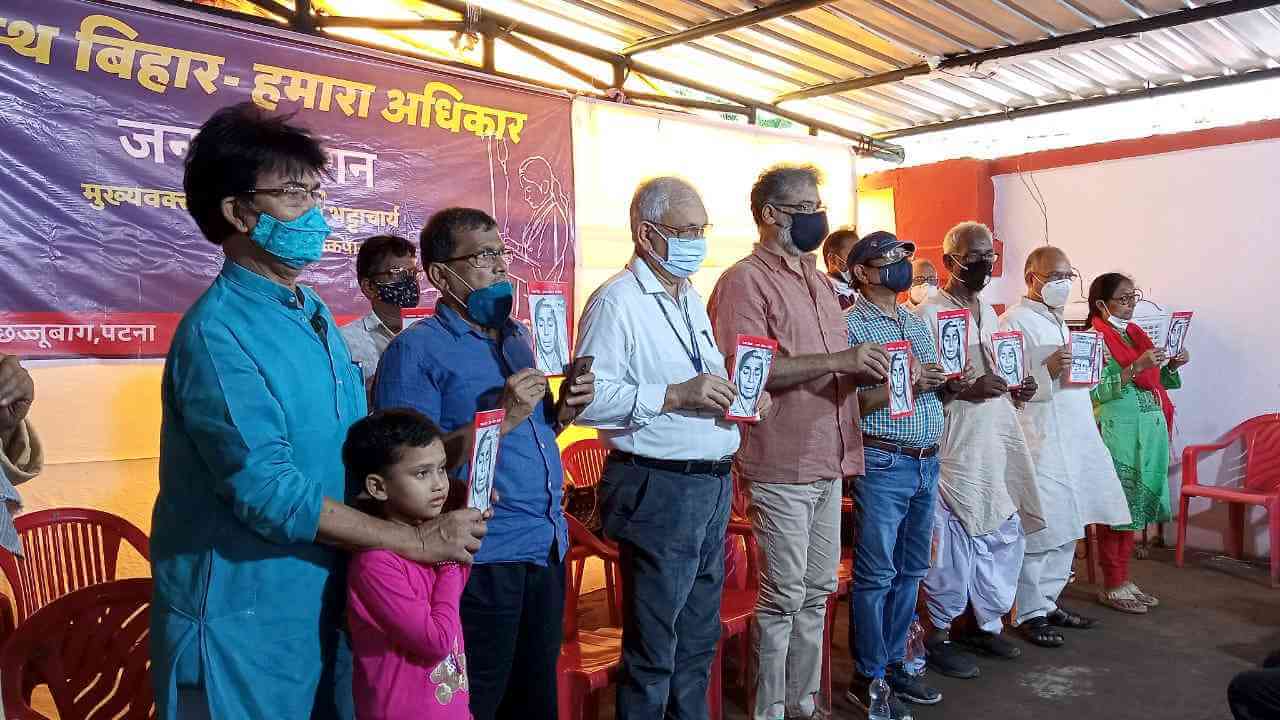 The list of people who died in several Districts of Bihar during the Covid 2nd wave as compiled by the CPIML has been released in its final form. Based on the deaths counted during the survey conducted in 13 Districts and talks with the kin of the deceased, a booklet 'Truth of the Covid 2nd Wave' was released and a documentary film 'Tragedy of the Century, Lies Told by the Ruling Powers' was screened.

The people's convention on the subject 'Swastha Bihar – Hamara Adhikar’ (A healthy Bihar - our right) was addressed by CPIML leaders as well as doctors, ASHA workers and party MLAs.

Our report says that the actual death numbers are at least 20 times more than government figures. It is now not correct to say that so many deaths happened due to Covid; in fact these deaths are due to government negligence. This is a massacre. When people needed oxygen the government failed to make oxygen available to them. Despite the Covid 1st wave the government made no effort to improve the health system. Had there been enough effective hospitals, deaths would not have occurred on such an extensive scale. The government did nothing for the people; on the contrary it did a lot to hinder them. The pain caused to the people must be accounted for. A movement on the issue of health needs to be organized. We have to be prepared on all levels to ensure compensation for the victims and prevent repetition of such a massacre. This booklet and this film are materials for such a movement. They are tools for launching the movement and should be shared extensively.

Dr Satyajit said that this people's convention gives us hope that the health system will be improved and people will force the government to allot at least 6% of the Budget for health. Dr PNP Pal said that all governments in the country are bent on benefiting corporate houses in health, education, transport and other sectors. ASHA workers and leaders Anuradha Kumari, Suresh Chandra Singh and Shashi Yadav, and MLA Manoj Manzil also shared their thoughts.

Earlier, CPIML Bihar State Secretary Kunal gave the introductory address. He discussed Covid numbers and said that if our report which covers only 4% of Bihar's villages shows 7200 deaths, the total figure comes to 2 lakhs (20 times more than government figures) as Bihar has about 50000 villages, big and small. If our team had been able to survey urban areas the figures would have been even higher. Of the people who died of Covid symptoms 15.47% tested positive only 19.91% were tested for Covid. 80.81% of those with Covid symptoms were not tested. Of the total number of deceased surveyed by us, 3957 were treated in rural hospitals, 2767 in private hospitals, and a mere 1260 in government hospitals. This proves how useless the government health system is and to what extent people have lost faith in it. Till the time of finalisation of this report, only 25 of these deceased people have received compensation.

These figures expose the lies consistently peddled by the government on Covid numbers. If the government and we do not get serious about this, how are we going to face the challenges posed by a possible 3rd wave?

1.  The government should pay compensation to families of all persons who died due to Covid or lockdown.

2.  Call to organise conventions across Bihar and intensify the struggle for improved hospitals in order to carry forward the Swasth Bihar--Hamara Adhikar (A healthy Bihar us our right) movement.

5.  Guarantee vaccination for all within 3 months.

6.  Spend 10% of the total State Budget on health and double the current expenditure per patient.

8.  Pass a Regulatory Act against loot by private hospitals and nursing homes.

9.  Free ambulances services from the control of NGOs and run these services under the direct control of hospitals.

10.  A High Court supervised probe into all deaths during the Covid period.