Instead of creating more jobs, the Modi government is cutting down existing jobs by privatising the public sector and pushing the youth into a dark and gloomy future. 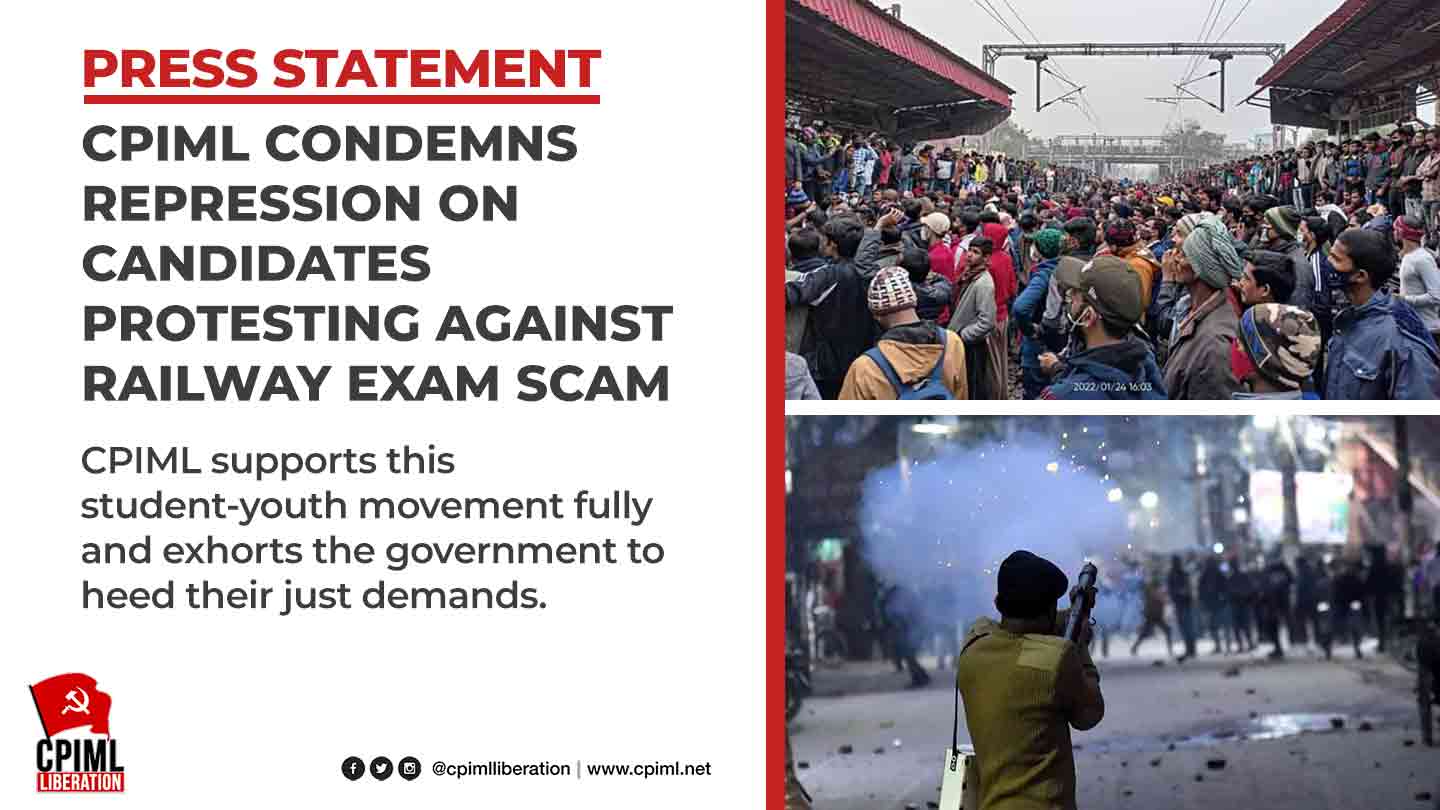 CPIML strongly condemns the brutal repression, lathi charge and tear gas firing, cases against and arrests of candidates protesting in Patna, Prayagraj, Nalanda and many other cities against the Exam Board's autocratic diktat in the Group D exam and demanding amendments and corrections in the RRB NTPC exam results.

CPIML Politburo member and Bihar State Secretary Kunal welcomed the extensive student-youth movement that has emerged against the Modi government's direct and indirect attempts to end jobs in the Railways and hand it over to private hands. He said that the candidates' demand is absolutely justified that only 1 candidate should have a declared result of only 1 post.

On 25 January AISA-RYA organized protests at various places, including Patna and Gaya against the brutal lathi charge on the protesting candidates.

Call for Bihar Bandh on 28 January against Railway Exam Scam

AISA-RYA have called for a statewide Bihar Bandh on 28 January 2022 in support of the student-youth movement against the Railway Recruitment Board - Recruitment for Non Technical Popular Categories (RRB-NTPC) result scam and the brutal police repression, which witnessed firing of tear gas and lathicharge. The bandh also demands for the withdrawal of cases filed against the candidates for protesting against the Exam Board's autocratic diktat in the Group D exam, and the Modi government's attempts to end jobs in the Railways and hand it over to private corporates. All students-youth arrested must be immediately released.

AISA-RYA also held Tiranga marches across Bihar on the occasion of Republic Day and appealed to students and youth to join the march to protect the Republic and rights of the people.

The Students’ Protest against RRB-NTPC

Despite the bitterly cold students blocked railway tracks in Patna and Ara for 10 hours on the night of 24 January during which period the Railways had to cancel 5 trains including the Rajdhani Express and 30 trains were stuck for hours.

From the morning of 25 January onward there have been reports of students blocking railway tracks in Nalanda and other Districts for the second consecutive day. The reason for the protests is the foul play in the vacancies and appointments issued by the Railway Ministry in 2019 just before the Lok Sabha elections.

In 2019 just prior to the Lok Sabha elections issued graduate level vacancies on a large scale for 21 Railway Boards, under which 35,277 appointments were to be made for 7 posts including station master, guard and TC. One year later the first exam was held on 28-12-2020 and the remaining exams, postponed on account of COVID pandemic, continued till 31-07-2021. The Railway Board declared the PT results on 14 January 2022.

The student-youth leaders said that on 14 January 2022 the Performance Test (PT) results were declared for the graduate level exam held for 35281 posts advertised by the Rail Ministry in 2019. As per the standard, the PT results should be 20 times the number of posts. Therefore, 7 lakh results should have been declared. Indeed, the Railways did declare 7 lakh results but the catch is that 4 lakh results are of candidates who have passed for 2 or more posts, some even for all 7 posts. Therefore in reality only 2.76 lakh results have been declared. The candidates' demand is absolutely justified that only 1 candidate should have a declared result of only 1 post. Clearly, the Railways are not appointing as many vacancies as have been declared. The candidates have understood this deception played by the government.

The second matter concerns the Group D exam in which 1.37 lakh appointments are supposed to be made, for which about 1 crore applications were received. This in itself shows the high rate of unemployment. The original notification had stated that only the PT exam would be held for this, but now an autocratic diktat has been issued that 2 exams will be held.

Government Should Not Play Trick with the Future of Students

But the moot question is, why is the government playing such a trick on the youth of the country? The government jobs have been more than halved during the 7 years of Modi's rule. Even the appointments of persons selected are lying obstructed for years. Even seats in UPSC have been reduced by half and posts are being filled from outside.

CPIML supports this student-youth movement fully and exhorts the government to heed their just demands.