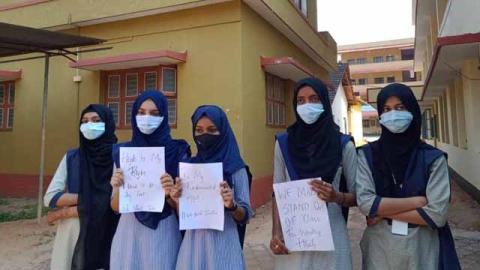 Students under the banner of AISA in Karnataka colleges protested in solidarity with Muslim women students being prevented from entering classrooms for wearing hijabs (headscarves). The All-India Lawyers’ Association for Justice submitted a letter to the Director, Department of Pre-University Education, Karnataka complaining against this violation of Muslim women students’ right to education.

The letter raised the shocking fact that the in Government Women’s PU college in Udupi, Karnataka 6 Muslim students were barred from attending their classes and forced to stand outside their classrooms for wearing hijabs (headscarves) to class. The students claimed that the harassment was not merely restricted to the issue of dress code and extended much beyond, including the prohibition on speaking in languages like Urdu within the college premises. Several students also recounted horrifying experiences of teachers pulling hijbas, intimidating students to chant Bharati Mata ki Jai and forcing students to hold saffron flags in an ABVP protest program.  Even a fortnight after, the students are forced to sit outside and listen to the teachers from outside the classroom.  It has also emerged that the students are being humiliated and have been forced to write apology letters to the college administration after the issue came to public light.

The AILAJ pointed out that “The actions of the College administration and staff against the students is per se violative of the fundamental rights of the students. It is important to remember that the Constitution recognizes that every person has the right be treated equally (Article 14), to live with dignity (Article 21), a right to education (Article 21) and profess a religion of their choice (Article 25). The constitutional value of being able to profess one’s religion freely and live with dignity has time and again been emphasized by the Courts in various judgments.  In Amnah Bint Basheer vs Central Board of Secondary Education , the Kerala High Court while holding that a dress code which bans hijab to entrance exams is unconstitutional, stated that “the right of women to have the choice of dress based on religious injunctions is a fundamental right protected under Article 25(1) when such prescription of dress is an essential part of the religion.” In another judgment - Yunusbhai Usmanbhai Shaikh vs. State of Gujarat and Ors  -  the Gujarat High Court held that, “the right to life and personal liberty, guaranteed under Art. 21 emphasize for decent living, which should be available to everyone, including Muslim girls, to decide their future by getting proper education and empowerment and also to decide their marital life.” Importantly, as a Government college, the administration bears a higher responsibility to ensure protection of fundamental rights of its students and promotion of preambular principles of the Constitution, including secularism.”

The letter went on, “denial of education to the young Muslim students and forcing them to choose between getting an education and their faith, is a human rights issue and must be treated as such. The targeting of the student’s right to their religious identity is nothing short of Islamophobia and seeks to plant divisions between different communities. The actions of the college in the current case are staunchly anti-democratic and anti-constitutional, and must invite strict censure and immediate intervention. AILAJ calls upon the Department of Education to set up a committee to investigate the incidents at hand and take immediate action against teachers and administration members complicit in the harassment of students.”