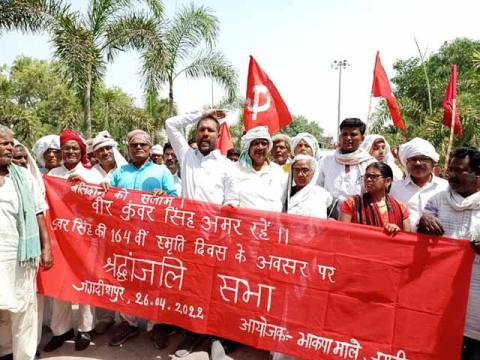 CPIML Bihar State Secretary Kunal said that BJP-RSS are conspiring to twist history under cover of 'Azadi ka Amrit Mahotsav' (Elixir of Independence) and bent upon strangling the values born of the freedom struggle. This time they are targeting Freedom Fighter Kunwar Singh. These are the same BJP people who are glorifying and erecting a statue of 1857 traitor Dumraon Maharaj to whom the British gave a large portion of Babu Kunwar Singh's property as a reward after the latter's death. A traitor and a revolutionary can never be fitted into the same mould.

23 April is an unforgettable day in the history of our country and especially of Shahabad. On this day Kunwar Singh led a great victory against the British near Jagdishpur in the great war of 1857 against the cruelty of the British, and for a while British rule had been thrown out from Shahabad.

But this time the victory celebration program was BJP-ized. Home Minister Amit Shah attended this BJP program organized through abuse of power and people's hard-earned money. What is Amit Shah's history? Inciting violence through communal polarization has been his profession. What right have BJP people, who are bent upon pushing the country into communal flames, to even utter the name of Kunwar Singh? Kunwar Singh was a great supporter of Hindu-Muslim unity. His correspondences with 1857 leader from Jehanabad Zulfikar Ali show clearly that there was an unprecedented Hindu-Muslim unity in that war. All those revolutionaries spoke about a widespread united front against the British. The Hindu-Muslim unity forged during the first war of Independence in 1857 remained the foundation stone for the later freedom struggle also. The people of Bihar will not allow such a committed supporter of unity as Babu Kunwar Singh to be hijacked by the riot-mongering hands of the BJP. The soil of Shahabad will never accept such riot-inciting people.

Kunwar Singh's Grand Daughter-In-Law Was Locked Up During Celebrations

State Secretary Kunal asked for clarifications by the government on certain issues. It should be noted that some days ago Kunwar Singh's great grandson Bablu Singh was murdered. His mother says that the administration is aware of everything but is taking no action. She has submitted applications to administrative officials and BJP leaders but today she was locked up inside the fort in order to suppress her voice.

This is the true character of the BJP. The party which treats Kunwar Singh's family in this way can never respect or honour any martyr. This is the party that is honouring 1857 traitor Dumraon Maharaj (who was rewarded for treachery by the British with Kunwar Singh's property) by erecting his statue. Traitors and revolutionaries can never fit into the same mould.

Protests were held across Bihar against the BJP-ization of Kunwar Singh Vijayotsav across the state against this on 27 April and protesters took a pledge to intensify the fight to protect Kunwar Singh's legacy.