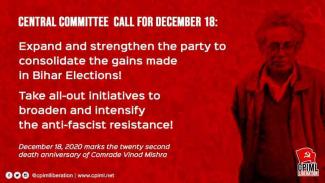 ​CC Call for December 18:
​Expand and Strengthen the Party to Consolidate the Gains Made in Bihar Elections!
​Take all-out Initiatives to Broaden and Intensify the anti-fascist Resistance!

December 18, 2020 marks the twenty second death anniversary of Comrade Vinod Mishra. Since 1999 we have been observing this day as 'Sankalp Divas' or a day of pledge taking for the entire party to renew its revolutionary resolve. This year we are observing the day in the midst of an unprecedented farmers' movement which has every potential to grow into a powerful people's resistance against growing corporate domination (popularly being described as Adani-Ambani-Company Raj') and fascist takeover of India. The encouraging gains made by the party in the just concluded Bihar elections have placed us in a better position to increase our role and meet the challenges of freeing India from the fascist danger. We must prepare ourselves individually and collectively to rise to the occasion.

Comrade Vinod Mishra had led the party to its emergence as an all India centre of revolutionary communists leading a comprehensive network of mass organisations and a whole range of mass political initiatives including participation in elections. The increased electoral presence of the party provides a live expression to the elevation of our assertion from securing basic human dignity of the most oppressed people to winning electoral victories on the strength of growing struggles for people's rights. Comrade VM encouraged us to grow into a big Communist Party without ever weakening the core ideological moorings, robust progressive outlook and vibrant democratic culture and organisational cohesion of a revolutionary communist party. As we take up the challenge of realising the party's growth potential, we must never lower our guard on these cardinal characteristics of our party.

All through the 1990s Comrade VM sensitised the party about the growing danger of communal fascism. He saw the Bathanitola massacre in a new light, emphasising the unmistakable signs of feudal violence growing into a communal fascist assault on the poor and a virulent attack on the revolutionary Left. It helped the party stay alert and determined in the battle against the BJP and the Sangh brigade even as we confronted the RJD government in Bihar and subsequently the UPA government at the Centre. Today, saving India and India's democracy from the Modi regime's fascist aggression has become the most decisive challenge for the Left and other opposition forces. This is why the Bihar election victories of our party have received such appreciation across the country. This is why our appeal to the left-liberal camp of West Bengal to stop the BJP from capturing power has been so widely welcomed in West Bengal.

The fascist offensive of the Modi government and the economic, social and political disasters facing the country have generated powerful protests and mass opposition. Protests by eminent writers and other cultural personalities against mob lynching; student awakening in the wake of the institutional murder of Rohith Vemula that have now grown into a massive assertion of young India for education, employment and democracy; the unprecedented mass opposition to the NRC-NPR-CAA package with Muslim women, university students and civil society activists in the forefront; the farmers' movement that started acquiring countrywide shape following the Mandsaur massacre and has now assumed the proportions of a historic upsurge; powerful periodic struggles of women and various sections of workers - mass resistance has continued to grow defying severe repression and fascist violence and hate and disinformation campaign. While Modi managed to win a second term in the wake of Pulwama, subsequent Assembly elections in Jharkhand and Bihar have clearly showed the potential to carry this resistance into the electoral arena. In the forthcoming round of Assembly elections all attempts must be made to oust the BJP from power in Assam, stop it from winning power in West Bengal and making inroads in Tamil Nadu, Kerala and Puducherry.

While resisting state repression and the disastrous policies of the Modi government, we must never lose sight of the vicious role of the RSS, its intricate network and grassroot communication and mobilisation activities. The communist counter-offensive against the fascist project of the RSS should possess not just characteristic communist ideological courage and political clarity but also the tenacity and intensity of mass work and the deepgoing and painstaking work style that communists have been known for. After the chaos of the Covid19 pandemic and the cruelty of the ill-planned lockdown, India will not submit to the dictates of the Modi government. The defiant spirit of Punjab farmers has already struck a massive chord with the fighting people across the country. The encouraging gains made by the CPI(ML) in Bihar elections have aroused new hope and unleashed a lot of energy and enthusiasm among the Left ranks and change-seeking people. We must make the fullest use of this new juncture to revive the communist movement and thwart the fascist threat.