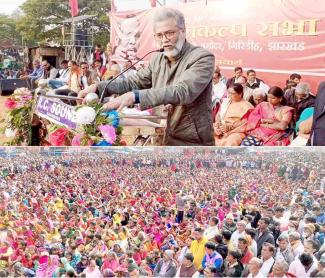 The 19th Martyrdom anniversary of Comrade Mahendra Singh was observed in the form of a huge public rally in his home town Bagodar in Jharkhand on 16 January 2023. Lakhs of people took pledge to defeat fascism to realise the dreams of Comrade Mahendra Singh on this occasion. The Martyrdom Day was also observed in all districts of Jharkhand as well as by party units in other states.

This day was observed as People’s Pledge Day in the whole of Jharkhand and the rally was a culmination of a campaign that was conducted by all party units to convey the message of martyred comrade Mahendra Singh to the masses in thousands of villages in the state. This campaign also popularised the CPIML’s slogan for the 11th party congress ‘Defeat Fascist - Save Democracy, Build the India of Martyrs’ Dreams’.

Comrade Dipankar along with thousands of people reached Khambhara, the village of Comrade Mahendra Singh, where he garlanded the martyr's statue and paid tributes on behalf of the party. Afterwards they all marched towards Bagodar where the rally was held at Com. Mahendra Singh Bus Stand campus ground which was overcrowded with a huge number of people who were gathered to pay tributes to their beloved leader.

Comrade Dipankar termed the Modi government anti-development which is working against the interests of common people. BJP government’s stint in power will be known for communal riots, crime, corruption, rape and atrocities on dalits and minorities. Bagodar MLA Vinod Singh said comrade Mahendra Singh is still alive in the hearts of the people.