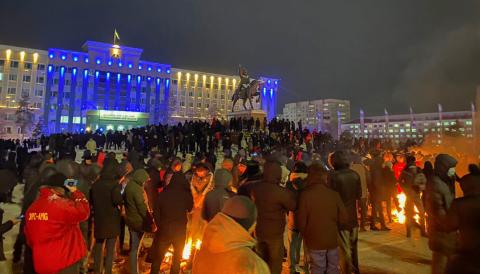 On the morning of January 2, two days after the world entered into a new year, hundreds of people began gathering in the city square of Zhanaozen in Mangystau Region in the Central Asian country of Kazakhstan. Overnight more people began to gather in the oil rich region of Zhanaozen and across the former Soviet republic Kazakhstan, including the capital city of Almaty. The main demand of the protesters was the reduction of fuel prices, which increased by around 100 percent . The increasing fuel prices in recent years has further caused a steep increase in food prices and deepened the income inequality that has plagued the nation for decades.

Facing severe police repression and government silence, the protests soon enlarged into a people’s uprising with trade unions and workers embarking on general strikes demanding an end to the rampant crony-capitalism, inequality and autocratic rule. More than 200 people were killed in the state repression.

In a statement, Aynur Kurmanov, co-chairman of the Socialist Movement of Kazakhstan said that “The main body of today's protesters in Kazakhstan consists mainly of workers in the oil/natural gas, metallurgy, mining sectors, as well as from unemployed youth.”

Nazarbayev was forced to resign after 2018-2019 protests that reflected the anger against the appalling socio-economic condition and deteriorating human rights scenario. Nazarbayev was replaced by his ally Kassym-Jomart Tokayev, but Nazarbayev still holds a considerable hold over the affairs.

The persecution of workers, trade union activists and democratic activists are widespread in the country. Earlier in 2011, Zhanaozen region had witnessed massive oil workers strike demanding better working conditions. Nazarbayev regime responded with violence, killing more than 16 workers in police firing. 37 oil workers were criminally charged for participating in the strike, and several thousands of strike participants were dismissed and never reinstated.

During the 2022 protests, President Tokayev portrayed the striking workers and protesters as terrorists and bandits, attempting to organise coup. As the labour strikes intensified along with the protests, Tokayev called for troops from the Russia led Collective Security Treaty Organization (CSTO) to protect the interest of wealthy oligarchs and foreign businesses. The Russian role in Kazakhstan seems directly taken from Russian President Vladimir Putin’s playbook to protect the capitalists and oligarchs in the region, and weaken the working class movements.