Skip to main content
Protests in Iran: Struggle for Women’s Right to Choice 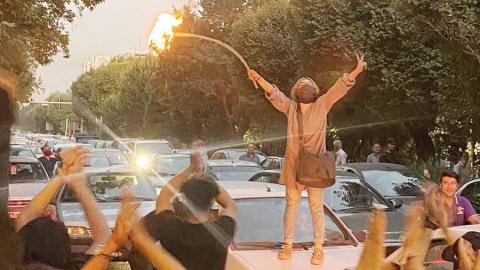 Massive protests have erupted in Iran against the custodial death of 22 year old women Mahsa Amini. Masha was detained by Iran’s “morality police” enforcing strict hijab rules on September 13th 2022 while she was on her way to Tehran. She was beaten up brutally and was taken to notorious ‘Vozara’ detention centre for schooling over the ’justification and education’ about hijab. She died on 16th September 2022. According to her brother she was swollen and bruised, but police version is that she died of sudden heart attack in custody.

Thousands of people have hit the streets in protest against the custodial death of Masha in a number of cities across the country, including in Tehran, Isfahan, Karaj, Mashhad, Rasht, Saqqes and Sanandaj. According to reports, several people have been killed as security forces launched brutal crackdown on the protesters. The protesters are demanding justice for Maha Amini and scrapping for strict dress law that is in effect in Iran.

The demonstrators have been calling for the state to respect women’s right to choice and noted that laws that make dress codes mandatory are a violation of human rights. Strict ‘Dress Code’ is in effect since 1979 Islamic revolution in Iran. Women have been protesting against the Iranian dress code of wearing hijab and similar protests were witnessed in 2018 and 2019 also.

In India, we have seen attempts by right wing forces and governments to impose mandatory dress codes, especially targeting young Muslim school going girls. In Karnataka, Muslim girl students were stopped from entering in colleges because of Hijab or headscarf.

Such regressive and patriarchal policies forced by the society and government must be vehemently rejected.  There is no place for state control over women’s right to choice in any democratic society. Whether or not a woman will wear hijab or headscarf is an arena of choice for her, not for the state, society or any other authority.

We stand in solidarity with the people of Iran in their struggle for justice and against state repression. Iranian government must respect women’s freedom to dress as they please and immediately stop the repressive action against the protesters.The Iranian government must launch fair investigation into the death of Mahsa Amini and punish the guilty.