Skip to main content
Victory to the Fighting Women of Iran! 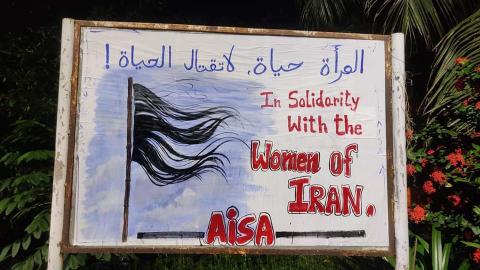 The death of Mahsa Amini at the hands of Iran's morality police for alleged 'dress code' violation has sparked off a veritable rebellion in Iran. The simmering anger among Iran's women and the working people against the repressive theocratic regime and worsening conditions of life is now exploding in protests across Iran. More than fifty people are already reported to have been killed by the regime, but defying brutal repression protests continue to spread.

Mahsa Amini was a 22-year-old Kurdish woman who had come to Tehran to visit her family. On 13 September she was detained by the Guidance Patrol, Iran's infamous morality police, and sent to a 'reeducation centre' ostensibly for a briefing on the right way of wearing the hijab. While her brother waited for her at the police station, the family was told that she had had to be hospitalised for cardiac treatment where she passed away on 16 September. Eyewitness reports reveal she was badly humiliated and beaten up.

The news of Mahsa Amini's death took the lid off the brewing anger among Iran's women and in no time they were out on the streets adding a new chapter of inspiring protests to the annals of international women's movement and people's assertion. Their chants "Zan, Zandegi, Azadi' (Woman, Life, Freedom), 'Azadi, Azadi, Azadi' (Freedom, Freedom, Freedom) and 'Ma Hameh Mahsa Hastim, Bejang ta Bejangim' (We are all Mahsa, We are all in this fight together) are resonating across the world. Their courageous act of hoisting their own cut hair as the flag of the movement will ignite the imagination of freedom-lovers and fighters for rights for generations to come.

Iran is a diverse country and the shocking death of Mahsa Amini has united Iranians from different backgrounds in their collective grief, anger and protests. Around the Iranian women's battle against theocratic control over their personal lives and choices we can now see wider waves of people's protests defying the state and state-backed vigilante groups and their attempts to crush the movement under brute force. Like in many historic instances in the past, the women of Iran today are playing the role of torchbearers in a deeply radical movement against theocratic tyranny. And that is why international solidarity for the fighting women and people of Iran is also on the rise.

There are of course attempts by religious bigots and pro-US interventionists to use the death of Mahsa Amini and the consequent protests in Iran to further their own Islamophibic narrative and clamour for regime change in Iran. The forces who persecute and humiliate women for wearing hijab in India are shedding crocodile tears for Iran's protesting women. The hijab is not the issue, the issue is autocratic and patriarchal imposition of dress code on women. Just as the women in Iran or Afghanistan have every right to reject the dress code that makes hijab or a particular way of wearing it mandatory, women in India have every right to reject any discriminatory diktat that stops them from wearing it.

The battle for women's freedom and rights remains as urgent in fascist-dominated India as in theocratic Iran or even in that self-styled champion and exporter of democracy, the United States of America, where women are once again having to fight to secure as basic a right as the right to abortion. If Iran is today having to fight for democracy free from theocratic control, we must remember how imperialist intervention has retarded the progress of modern Iran at different junctures.

In the early 1950s Iran became a victim of the CIA-engineered coup Operation AJAX which toppled the democratically elected government of Mohammad Mosaddegh to subject Iran to the monarchical rule of the Pahlavi dynasty. Mosaddegh was toppled for his progressive politics and especially his bold move to nationalise the oil industry in Iran.
The 1979 revolution was eventually taken over by theocratic forces to turn Iran into an Islamic Republic, but in terms of foreign policy Iran under Ayatollah Khomeini did not return to the pro-US pro-Israel line of the Pahlavi era. If we care to listen to the pro-democracy activists of Iran, we will understand how the US sanctions on Iran and the constant targeting of Iran by the US-Israel axis actually help the repressive regime in Iran to drum up domestic support and legitimise its repressive rule.

Afghanistan is another example of the disastrous impact of the sinister policy of American aggression and intervention in the name of women's rights and democracy in the Islamic world - after decades of military occupation the US recently exited Afghanistan only by transferring power to the Taliban.

Within India too, we are only too aware of how the Sangh brigade camouflages its own misogyny and bigotry by shedding crocodile tears for Muslim women. Its campaign against triple talaq and now against hijab is presented as proof of its concern for the empowerment of Muslim women, but its attitude to Muslim women became crystal clear in the wake of the Shaheen Bagh agitation for equal citizenship. From malicious lies, online bullying and digital assault through toxic apps like Bulli Bai to victimisation under draconian laws and vindictive bulldozing - Muslim women activists continue to find themselves at the receiving end of the Sangh brigade's systematic campaign of persecution and unmitigated hate. With the contemptuous dismissal of Zakia Jafri's review petition, the vindictive arrest of co-petitioner Teesta Setalvad and the brazen felicitation of the rapists and murderers in the Bilkis Bano case, Muslim women are now being openly denied their right to seek justice.

We must extend warm and unconditional support to the fighting women of Iran to secure their full rights and freedom from theocracy and patriarchy. We also support the Iranian people's right to chart their own course free from any kind of Western intervention. The battle against patriarchy and misogyny, essential for social transformation, should also be seen as a great source of strength in every battle for freedom and democracy. Victory to the fighting women of Iran!