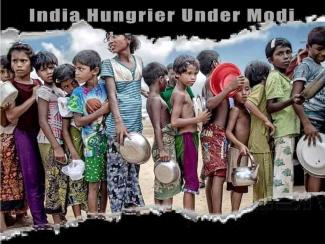 What Is The GHI

Let us also note that the GHI is peer-reviewed by external experts and that the methodology has long been established and tested. The international community- including India - has agreed upon the SDGs (sustainable development goals) and the GHI uses indicators that are part of the indicators which measure progress towards the SDGs.

Before we jump to the government’s response to the GHI data, let us look at other relevant data from our own country.

Is The GHI “Unscientific” or Based On An “Opinion Poll”?

Indians by now are no longer surprised when the Modi government shamelessly (whether through fake images on social media, fabricated data, or misleading arguments) lies to defend the indefensible. Yet somehow the government surprises us by making each lie worse than the previous one. The government claims that the GHI methodology is “unscientific:” and that the data is based on a “4 question poll..” It would be best to leave it to Miriam Wiemers, Advisor to the Global Hunger Index to tackle this baseless and absurd claim:

“The (UN Food and Agriculture Organization) FAO’s telephone-based opinion indicator — the Food Insecurity Experience Scale (FIES) —— is not used in the GHI. The GHI uses the prevalence of undernourishment indicator, which is assessed by FAO using Food Balance Sheet data from each country.”

Does The GHI Fail To Measure Height And Weight?

Funnily enough the government accepts the GHI finding that India has been improving on the under 5 mortality rate indicator. So the Modi Government is willing to believe the “unscientific” GHI when the index reports an improvement in performance! The government also points out that in the GHI, India’s performance on stunting and wasting has not worsened. Here, the Government “forgot” to mention that for “stunting and wasting”, the GHI has used the same data that it used last time - data from NFHS 4, so naturally there is no change in performance. In fact, the NFHS-5 found that stunting among children below five did not improve at all but wasting worsened in most of the surveyed states and Union Territories since NFHS-4.

Steep Fall in Budget For Child Nutrition Under Modi

The government (which is a maestro at using red herrings and denials every time it is questioned) claims to be “shocked” at the “unscientific methodology” of the GHI. What it should really be shocked at is the continued and worsening extent of hunger and deprivation in our country under Modi, who claims he is the first PM in 70 years to address India’s chronic problems and bring “good times” to Indians.