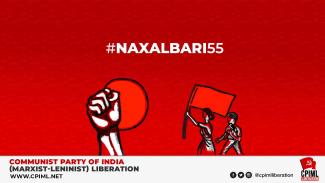 Modern Indian history is punctuated by a series of popular uprisings. The protracted battle for India's independence was powered by uprisings of various sections of oppressed Indians, oppressed not just by the colonial power which came from outside but also by the social structure that dominated Indians from within - the caste system, patriarchy, feudal power and local kingdoms and royalties.
Revolts of the indigenous people and poor peasants, fleeced by landlords, moneylenders and colonial rulers, were the mainstay of people's resistance whether we talk about the nineteenth century rebellions including the first war of independence (1857-59), or the big mass awakenings under the leadership of Gandhi like the civil disobedience and Quit India movements or the communist-led peasant upsurges of the 1940s like the Tebhaga and Telangana.

The upsurges have continued after 1947 as India fights for realising the dream of real equality, liberty and justice. The upsurge of the landless peasants and oppressed tea workers at Naxalbari on 25 May, 1967 marked one such historic moment. It struck a massive chord with the oppressed and the youth across India.

The state unleashed a veritable war to crush it - the present-day armoury of indiscriminate use of draconian laws, custodial violence and extra-judicial terror which draws heavily on the colonial era got its first big boost in the laboratory of state repression in the early 1970s.
The legacy of Naxalbari has however continued to grow, deepening and spreading with every passing day since that historic upsurge 55 years ago.

The upsurge had led to the formation of the CPI(ML) on 22 April, 1969 and even though the fledgling new party had to face the full might and wrath of the Indian state, including a heavy use of extra-judicial violence and massacres that had shades of the Suharto-era bloodbath of communists in Indonesia, the party has succeeded in weathering the storm. It has hugely energised and revolutionised the communist movement in India. The coinage and indiscriminate use of the term 'urban naxal' by the Modi regime to target almost such a wide range of voices of dissent testifies to the power and resilience of Naxalbari.

Contrary to the popular mythology of Naxalbari, it was not an anarchist, adventurous act by a few isolated revolutionaries trying to imitate the trajectory of the Chinese revolution on the Indian soil. Had it been so, it would have only been a shortlived bubble. It was a mass upheaval rooted in India's tradition of revolts against injustice and oppression. It had the sparks and energy of India's freedom movement, a bold and glorious attempt to realise its radical potential and legacy.

Within the history of the communist movement it was a determined attempt to resurrect the spirit of Tebhaga and Telangana and turn the first major wave of post-Independence popular disenchantment and political transition (the Congress lost nine states in the 1967 elections) into a determined revolutionary quest.

Comrade Charu Mazumdar was a dedicated organiser of the Tebhaga movement and he applied all his revolutionary experience and insight developed since his Tebhaga days to build the Naxalbari upsurge with his team of comrades and the fighting people of the Dooars and hill regions of Darjeeling and North Bengal. The foundation of the CPI(ML) and its rapid spread showed the deep roots of the revolutionary communist movement and its grassroots appeal and strength. And the way the movement has succeeded in holding on to its ground and expanding its horizon since the declared Emergency of the 1970s to the current reign of fascist offensive shows its innate strength and resilience.

On the 55th anniversary of Naxalbari we pay our deep respect to all the martyrs of the movement, to the leaders and activists who have dedicated their lives to this great cause, and all the poets, singers, balladeers who have spread the message across India and the people in all the areas of struggle who have withstood tremendous repression and yet sustained the movement with all their courage, energy and love. Naxalbari has become a metaphor for the indomitable spirit of people's resistance against oppression and injustice. It is the revolutionary smile of the fighting multitude in the face of the arrogance and aggression of power-drunk rulers. The battle is on and the people will have the last words. Red Salute to Naxalbari!