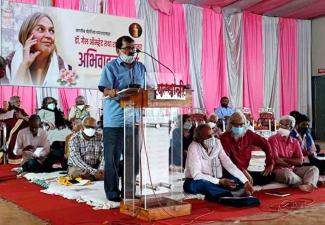 Social scientist of international repute; founder member of Shramik Mukti Dal Maharashtra;   a veteran researcher-writer on Buddha, Mahatma Phule, Dr. Ambedkar, and Marx; a feminist, a scholar who interpreted the Sant Literature and the Warkari tradition of Maharashtra in a new light; a participant in the women’s movement and adivasi movement who travelled extensively throughout Maharashtra – Gail Omvedt, 81, died of old age at her home at Kasegaon village, in the Sangli District of Maharashtra.

Gail Omvedt was a Swedish American born in Minneapolis in Minnesota. Gail hailed from a family connected with the Democratic Farmer Labour Party. Her grandfather was a state representative four times. Gail’s parents also worked for the same party. This party was and is still limited to the state of Minnesota and is nationally connected with the Democratic Party. When I first met Gail, she told me how before the declaration of Independence, Connecticut and Massachusetts were Swedish colonies later handed over to the British in the same way Mumbai was handed over to the British by Portugal in dowry!

Gail participated in various student movements and anti-racist movements in the US as a student. She was at the forefront of the anti-war movement during the Vietnam War. After completing her Masters in Sociology she joined the doctoral program at the University of California, Berkeley - a centre of anti-war progressive movements.

She took up studies on the Anti-Brahmin movement in India and during her research came in close contact with Lal Nishan Party and other progressive forces in Maharashtra. She travelled and interacted extensively across an entire spectrum of the Maharashtra society transcending class and caste barriers to write her doctoral thesis, ‘A Cultural Revolt In A Colonial Society: The Non Brahmin Movement in Western Maharashtra’ which was translated into Marathi by the Late Comrade P D Dighe of LNP. My mother proof-read the book and the book was published through Scientific Socialist Education Trust, which also published the English version in 1976. The thesis helped revive interest in Mahatma Phule’s contribution to the social liberation and anti-caste movement.

She met Bharat Patankar, a medical doctor by training who left his post graduation studies to become a full-time activist. He was a part of the “Magowa” group of left-leaning educated Maharashtrian youth (“Magowa” in Marathi connotes “Quest”) of the 1970s: a product of the international and national ferment of the period. Magowa was unhappy about the established left parties and were in quest of an alternative. They published a monthly by the same name which offered a rich independent Left analysis of issues and events. Sudheer Bedekar, Anant Phadke, Ashok Manohar, Kumar Shiralkar, Mukta Manohar, the Kanhere brothers, and Satish Kamat were some of the leading comrades in Magowa. Members of the group started working amongst the Adivasis in Northern Maharashtra at Shahada who were resisting feudal landlords. Later some of these activists - Bharat Patankar, Ashok and Mukta Manohar - started working together with LNP amongst industrial workers. The activists in Pune formed a commune to live together. Mukta and Ashok, the Kanheres, and Gail and Bharat were the members of the commune. Many others who came to Pune for work stayed there as well. LNP had established and run such communes for a long time - in Mumbai, Kolhapur, Pune and  Ahmadnagar. Many of us, including Atul Dighe, Amol Kerkar and I from the Kolhapur commune, and Madhav Chavhan, and Neela Limaye from the Mumbai commune are surviving members of the communes - a unique chapter of socio-political life in Maharashtra - and we are all proud of that legacy!

Magowa then dissolved itself and the activists joined various parties of their ideological choice. Bharat had started working with LNP amongst the Textile workers as a full time worker. His father Babuji Patankar was a veteran communist leader and one of the leaders and organizer of the ‘Prati Sarkar’ - a parallel government in Western Maharashtra challenging British rule, between August 1943 and May 1946. His mother Indutai was a participant in this movement and rebelled to marry Comrade Babuji Patankar. Gail was close to Comrade Leela and A D Bhonsale of LNP. The marriage of Gail and Bharat was solemnized during Emergency in their house. Bharat and Gail have travelled together in the politico-social canvas of India and Maharashtra for over 45 years.

Gail became a leading theoretician and practitioner of social movements in India. She had  differences with LNP over the assessment of the farmer’s movement led by Sharad Joshi, and of the Dunkel agreement.

After formation of the Shramik Mukti Dal she participated in many struggles of women and peasants in the rural Western Maharashtra. She has been associated as faculty with various universities in India - as the Phule Ambedkar chair in Pune University, the Ambedkar Chair in Niswas, Odisha, Asian visiting professor in Nordic Institute of Asian studies in Copenhagen, the Nehru Memorial Museum and Library, and the IIAS Shimla.

She was an advisor to FAO, UNDP, and NOVIB. She carried out research on the Bhakti movement under the ICSSR. She was a regular contributor to the EPW and The Hindu. She has more than 25 titles to her credit. Those include Buddhism in India, Seeking Begampura, Dalits and the Democratic Revolution, Understanding Caste, We Will Smash The Prison, and New Social Movements in India.

My wife and I have fond memories of Gail. Our families are shared political ties: my father Comrade Santaram Patil and Bharat’s father Comrade Babuji Patankar were both freedom fighters of a Left bent. Gail and Bharat worked with my father in various movements especially in Western Maharashtra. Gail together with my mother Comrade Sumitra Patil – popularly known by her maiden name Datarbai, and Indubai Sawant together organised many women’s struggles. My mother had worked as the Head mistress of the school established by Nagnath Naikwadi, a freedom fighter and a member of the Patri Sarkar at Walwa not very far off from Kasegaon in the mid-1950s for three years and so was well-known in the area.

When the workers’ movement decided to field my father Comrade Santaram Patil against the then CM of the state Vasantdada Patil, Bharat was one of the main organizers in the campaign. The by-election had become necessary as Vasantdada Patil was not an elected member of the Vidhan Sabha. The election was held in June 1983 against the backdrop of the textile workers’ strike which had started on the 18th of January 1982 and was in its 18th month. Comrades like my father who had deep roots in rural Maharashtra, helped collect grain and funds from farmers to sustain the striking workers’ families. When the striking workers decided to challenge Vasantdada Patil at Sangli on the issue of the textile strike, supported by all the opposition parties, they picked my father. He was an outsider to Sangli had no resources matching the Sugar Baron Vasantdada, with whom he shared only one comparable attribute – his participation in the freedom movement. The workers fought that uneven battle with grit and determination, and Santaram Patil lost to the class enemy by just 5000 votes!

My parents had close relations with Indutai since the 1950s, and with Bharat too. I still remember the various books and magazines published by Science For The People that Gail used to bring from the US. I remember when she and Bharat stayed at our house and dined with us after their marriage. I have a vivid childhood memory of Gail’s blue sapphire ring that matched her eyes. When I met Bharat after Gail’s passing, my memories of Gail came alive when I saw that ring on Bharat’s finger. Their daughter Prachi now lives in the US and is active in anti-racism movements and other democratic movements in the US. Gail was laid to rest in an institute named after her father-in-law.

In her obituary for my father Gail had written, “when the deprived Ekalavyas will take the bow and arrow to establish their own state Comrade Santaram Patil will be remembered as one of those who fought alongside.” Yes Gail, so would they remember you as well!

The struggle for just, equal and honourable society will continue, inspired always by you, Gail. You rest in power.

Their home carried so many historical resonances. Photographs of Comrade Babuji Patankar dating to the parallel government in Satara; and of those inspiring women Indutai and Gail brought to mind the unbreakable relationships between the progressive currents in the freedom movement, and the left-democratic movements in the country.

Later, I held in my hand a copy of A Cultural Revolt In A Colonial Society: The Non Brahmin Movement in Western Maharashtra - Gail’s thesis published in 1976 by the Lal Nishan Party’s Scientific Socialist Education Trust. The print line bore the address of the LNP’s Dadar office “Shramik”; and comrades told me that the printer’s office had actually stood at the place where the Pune municipality workers’ union, also called “Shramik”, now stands. That book in hand, I asked young comrades of the LNP if we could visit the Phules’ home, and the school they first started.

It was the eve of the Ganpati festival, and we found ourselves among the crowds right opposite a Pune landmark – the Shreemant Dagdusheth Halwai Ganpati temple. Sandwiched between two small shops, there is a dilapidated stairway – blink and you would miss it. It is unsafe to climb it, we were told, but one could go up one at a time. Two of us went up the old wooden stairway that is practically crumbling, to find a few ruined rooms and a blackboard. This is where Savitribai must have taught girls; she must have walked the same street we had just walked up, getting dung thrown at her for daring to educate girls and Brahmin widows!

We went to the Phule Wadi next – and what a pleasant surprise it was to find that the Phules’ home has been preserved beautifully. As soon as you step in, you are taken back a couple of hundred years. In the yard is the well the Phules dug to make sure Dalits, deprived due to untouchability from using the common wells, could get water. And in the wider compound, murals tell the story of the Phules, and the busts of the Phules are so well done that they look like they might speak. Paintings inside the house memorialise Savitri’s comrade and friend Fatima Sheikh.

On the way back, we also crossed the bridge where the Sanatan Sanstha terrorists assassinated Narendra Dabholkar. It was sobering to remember how the contending legacies of the fascist Savarkar on one side and the revolutionary Phules and their inheritors (Gail and all the Shramik Mukti Dal and LNP comrades, as well as activists like Dabholkar) on the other, still contend with each other in this city.