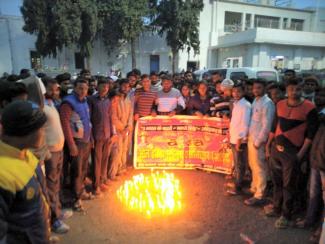 DAYS after the horrific attack on the CRPF convoy moving from Jammu to Srinagar, the country is still coming to terms with the Pulwama tragedy and its aftermath. The death toll has gone up to close to fifty and several jawans are yet to recover from the serious injuries they sustained. The shocking audacity of the attack, with a car laden with some three hundred kilograms of explosives, intercepting a convoy of as many as seventy-eight vehicles and ramming into a bus packed with CRPF jawans, and the scale of the tragedy, which has taken the heaviest toll of security forces in the valley till date, has been mind-boggling. There is a palpable wave of sympathy for the families of the fallen soldiers across the country who will never get their dear ones back.

Even as India copes with this tragedy, the Sangh brigade has launched an orchestrated campaign to exploit the emotions of the people and use the sacrifice of the jawans for the BJP’s own electoral gains. Kashmiri students, traders and professionals are being systematically targeted in various parts of the country, evoking stark memories of the anti-Sikh pogrom in the wake of the assassination of Indira Gandhi. There is a vicious campaign to mobilise even school children for demanding revenge and destruction of Pakistan. This jingoistic cry against Pakistan is also being directed against Kashmir and Kashmiris, the Muslim community in general, students and teachers of universities like JNU and AMU, and representatives of the Left-liberal stream; in short whosoever is not speaking the language of hate and war and is instead advocating peace, harmony and justice is being branded as a supporter of Pakistan and defender of terrorism.

Far from absolving the Modi government, the Pulwama tragedy actually puts it further in the dock. Kashmir is now directly under the supervision of the Centre. Till recently, the BJP was sharing power in the state along with the PDP. Clearly, it is the Modi government which owes an answer to the people for the huge lapse in security leading to the attack. All concerned agencies and officials were warned about possible attacks and asked to beef up security. The CRPF itself had made a request for arrangements to airlift its personnel. Yet a 2500-strong contingent moved in a convoy and Pulwama happened. We still do not have any answers from the government about these evident lapses in security. Rather, BJP leaders are openly calling for converting the nationalist sentiments of the people into votes for Narendra Modi.

Five years ago when Narendra Modi came to power, national security was one of his key planks. In one of his much watched video clips, Modi is seen posing a series of questions to Manmohan Singh regarding cross-border terrorism. When the Centre guards the border through its forces, when it can control the flow of funds and information utilised by the terrorists, when it can mount pressure on Pakistan to hand over terrorists operating from Pakistan’s soil to India, why is the Manmohan Singh government unable to control terrorism, Modi asked. Today, Pulwama has redirected all these questions to Modi himself. And it is not just Pulwama, his entire tenure of five years has been punctuated by serial attacks and clashes, Pulwama was preceded by incidents like Pathankot and Uri, and by all accounts, Indian security forces have suffered heavier casualties during the Modi years than under the previous regime.

There is growing clamour in the corridors of power for going to war with Pakistan and unleashing heavier repression in Kashmir. In other words, the government is proposing to further intensify what it has already been practising as its so-called Kashmir policy. But do not facts indicate that these measures have not been producing any result in terms of lessening the conflict in Kashmir and bringing about any degree of normalcy? The elected Assembly has been dissolved, recent elections have witnessed almost total boycott in the valley, and now the government has withdrawn the security cover given to Kashmiri leaders. The policy of raining pellets and bullets to suppress every protest and dissent in Kashmir has already virtually converted the valley into a police state. The BJP is the only party which enjoys political liberty in Jammu and Kashmir, and it uses that to the hilt only to sharpen communal polarisation and defend the indefensible like the rape and murder of eight-year-old Asifa in Kathua.

The five years of Modi government have been instrumental in causing a serious deterioration in the Kashmir situation. Official figures indicate that the number of people killed in Kashmir (including civilians and all who are dubbed terrorists/extremists/

In other words, while the political strategy of the Modi government has gone through a series of flip flops – from power-sharing with PDP to dissolving the Assembly and withdrawing security cover from Kashmiri leaders – without ever addressing the crucial agenda of justice and democracy in the valley, the military strategy is also not working or rather proving counterproductive. It is also quite ironical that the chief of the Pakistan-based terrorist organisation Jaish-e-Mohammad which has claimed responsibility for the Pulwama attack is headed by the same Masood Azhar who was released from an Indian prison in 1999 by the Vajpayee government in exchange for the release of passengers of a hijacked Indian plane, and the senior police official who escorted the three Pakistani prisoners from the Indian jail to Kandahar was none other than Ajit Doval, the current National Security Advisor to Narendra Modi.

With just a few weeks to go for the Lok Sabha elections, the Modi government is trying to use the Pulwama tragedy, not for any introspection or course correction regarding the government’s Kashmir policy or handling of India-Pakistan relations, but as shield to protect the government against the growing anger of the people for its accumulated failures and non-fulfilment of promises. It is desperately trying to push India into a state of war that can totally dominate the elections and manufacture yet another victory for an otherwise thoroughly discredited government. The people of India who have been boldly defending the Constitution and fighting for their rights in the face of the communal and corporate aggression of the Modi government will have to defuse and defeat this last-ditch desperate design of the Sangh-BJP establishment. The Pulwama tragedy must not be allowed to be exploited by the Modi regime as its final trump-card; rather the government must be held accountable for this huge failure. Pulwama should instead prove to be the final nail in the coffin of this disastrous regime.