The Pledge of Independence Day 2020: Freedom from Fascism

August is India’s month of independence. This year as India celebrates the seventy third anniversary of the country’s independence, the celebrations are however bound to be unprecedentedly muted. Not just because of the mandatory restriction on assemblies of people and the physical distance that citizens are expected to maintain as part of the Covid19 preventive protocols, but more because of the dark clouds of gloom and uncertainty on our everyday sky. True, Covid19 is a global pandemic, but the disaster resulting from the combination of Covid19 and a totally ill-planned, massively mismanaged and cruelly enforced lockdown is almost exclusively India’s own.

Eight months into the Covid19 pandemic, much of the world has more or less contained the spread and overcome the worst phase of the shock wave. The pandemic reached India relatively late, but little use was made of the time we got to plan and prepare for it, and the spread of the virus has gone on to become more exponential with every passing week. Together with the US and Brazil, India is now in the driving seat of this global pandemic. Incidentally, these are the three countries that currently have most rabidly rightwing authoritarian regimes that shun all sensible advice and follow the impulses, whims and hubris of their despotic heads.

When the Modi government belatedly woke up to the Covid19 challenge, PM Modi thought he could deal with it with a few theatrical speeches and events, calling it a battle of Mahabharata to be won in twenty-one days. Instead of days we are now about to complete twenty-one weeks, and while the figures are escalating exponentially, Modi’s words have dried up. The PM now hardly talks about the Covid19 epidemic; he has moved on with his new found formula of treating the crisis as a series of opportunities. And the ‘opportunities’ are already being used to the hilt, in the economy as well as in the political arena.

Coal blocks are being auctioned, private trains are being introduced, labour laws are being suspended, agricultural marketing is being handed over to private players. While the whole world is feeling the need for effective state intervention, especially socialization of healthcare, the Modi government is busy abdicating the responsibilities of the state and pushing through indiscriminate privatization in every sector of the economy. And in a most audacious mockery of ideas, the Modi government is trying to sell this combination of abdication of state responsibilities and corporate takeover as a campaign for ‘Atmanirbhar Bharat’ or self-reliant India.

Alongside this aggressive privatization drive we see relentless weaponisation of the lockdown to persecute dissenting voices and activists of people’s movements. While the NPR project has had to be temporarily stalled because of the epidemic, the government is systematically harassing and arresting leading activists of the anti-CAA movement, even implicating them in a most sinister fashion in the Delhi riots. Like the Bhima-Koregaon attack on Dalits, the Delhi riots, in which innocent Muslims bore the brunt of the carnage, too are being stood upside down to turn it into a grand witch-hunt of students, intellectuals and human rights activists.

In August last year, the Modi government had unilaterally deactivated Article 370 and robbed Jammu and Kashmir not just of its constitutional autonomy but also of its statehood. The coup was enforced on the ground through a massive and blanket crackdown – internet and mobile telephony were shut down, leaders including former chief ministers were all put under house arrest and the people were effectively all locked down as the state saw an unprecedented military deployment. More legal and policy changes have been introduced since then in a brazen attempt to change the demography of India’s only Muslim-majority state.

Initially the move had some support within Jammu and Ladakh, but over this last one year the support has all but disappeared and disillusionment, anger and alienation are now writ large all over Jammu and Kashmir. Compounding India’s Kashmir crisis is the growing transformation of the Ladakh LAC with China as a zone of continuing tension and friction. The LOC with Pakistan and the LAC with China both becoming simultaneously tense can only be a national security nightmare for New Delhi and this is precisely what the Modi government has landed India in. In the Galwan valley clash with China, India has already suffered the worst casualties since 1967, and by all accounts the mutual disengagement and pullback has only pushed the LAC further quite a few kilometers into the Indian side. The situation is certainly not going to be resolved by the stubborn denial of the Modi government.

What makes India’s China challenge more intractable is the Modi government’s growing foreign policy fiasco. The government always goes out of its way to appease America and Israel, even though the US policy of global domination and anti-immigrant hostility has increasingly adverse implications for India’s own interests. And Modi’s biggest foreign policy failure lies in India’s growing isolation from and antagonism with the whole range of neighbouring countries. India’s problems are no longer limited to the ‘traditional rivalry’ with Pakistan; India now has problems with Afghanistan, Bangladesh, Sri Lanka and even Nepal, the only other Hindu-majority country in the world. The anti-Nepal tirade of India’s dominant electronic and print media, and the shocking humiliation meted out to Nepalese citizens in Modi’s own constituency Varanasi can only vitiate India’s ties with Nepal.

Faced with growing failure on economic and foreign policy fronts and completely rattled by the Covid19 epidemic, the Modi government now once again desperately seeks to divert the attention of the people by destabilizing opposition-led state governments and stoking Hindu sentiment around the construction of Ram temple in Ayodhya. In the middle of the epidemic and lockdown restrictions banning all religious assemblies, Modi is now reportedly going to lay the foundation stone of the proposed Ram temple in Ayodhya on 5 August, exactly a year since the Modi government had stripped Kashmir of its constitutional status and statehood. The Sangh-BJP establishment clearly wants to mark August 5 as its special day of victory over India’s Constitution and its promise of a secular democratic republic.

The battle between the two visions of India – the vision of liberty, equality, fraternity and justice upheld in the Preamble to the Constitution and the conspiracy of turning India into a Hindu Rashtra which in Dr Ambedkar’s prophetic words would be the greatest calamity for India – is now out in the open. The spirit of independence had guided India towards abolition of landlordism and the princely states, nationalization of strategic industries and services and creation of a powerful public sector, and the quest for a foreign policy free from imperialist dictates. Under the Modi-Shah regime, we now see an alarming reversal on all these scores. In the face of this grave danger, the people of India will have to return to the trails blazed by the likes of Bhagat Singh and Dr Ambedkar and take India to the destination of a vibrant people’s democracy marked by economic independence and social equality. 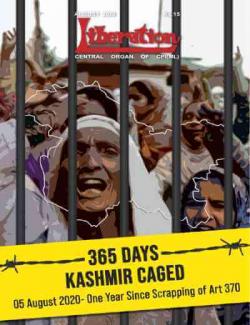 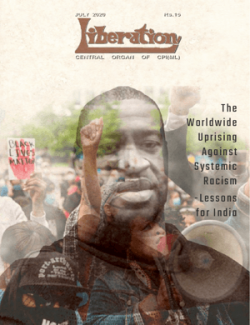