Bank Privatisation Is a Disastrous Idea – Stop It 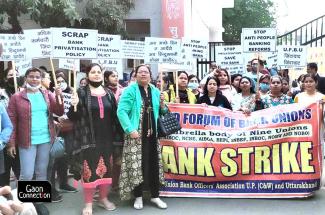 Despite having been forced to beat a retreat on the pro-corporate farm laws, the Modi government is aggressively pushing for reversal of nationalisation in another key sector: banking. Five decades after the historic bank nationalisation, the government now desperately wants to bring down the minimum government holding in public sector banks from 51 percent to 26 percent apart from carrying out outright privatisation of select public sector banks. The government is however aware that in these five decades, public sector banks have acquired a reputation for being safe and stable while private banks are considered risky in popular perception. Before going for privatisation, the government has therefore launched a new ‘depositors first’ rhetoric, promising depositors a refund of up to half a million rupees (last raised in 1993 to Rs one lakh) within a period of ninety days in the event of a bank collapse.

Total volume of bank deposits in India has grown steadily in the five decades of bank nationalisation and quite rapidly in recent years. In the last one decade deposits grew threefold, rising from the 50-trillion mark in February 2011 to 100 trillion rupees in September 2016, and to over 150 trillion by the end of March 2021. Despite growing promotion of private banks, public sector banks still account for two thirds of total deposits in India. Demonetization has had little effect on black money, but it has certainly forced more people towards banking, and growing use of digital transactions has also played a major role in the growth of banking in recent years. Bank privatisation first of all means enabling private companies to gain direct control over the massive financial resources generated through public savings.

The push for privatisation has been premised as a solution to the crisis of the banking industry and the biggest factor contributing to this crisis is what is euphemistically called NPA or non-performing asset. Now bank loans always run a certain risk of non-payment, but that in-built risk never assumed the proportions of today’s NPA crisis till standard lending norms were adhered to and banking prudence was not sacrificed at the altar of the compulsions of crony capitalism and the collusive business-politics nexus. While liberalisation of banking norms has aggravated the malaise, the impunity granted to wilful defaulters has made it worse.

With nationalisation of banks came the emphasis on priority sector lending – lending for agriculture, MSMEs, housing, education, social infrastructure projects and purposes. The bulk of the NPAs has however originated elsewhere – primarily in the corporate sector. With privatisation, priority sector lending will suffer and banking will increasingly be pushed towards short-term profit-making through share market and other quick return investments. It should be noted that banking reforms are being accompanied by parallel pension reforms, whereby foreign investment in pension sector is being raised from 49 to 74 percent and pension funds too are being diverted towards the share market for quick returns. This is the perfect recipe for inviting volatility in India’s financial sector. All these years India had managed to steer clear of the global financial crisis, the stability and resilience of India’s financial sector will now give way to increased vulnerability and crisis.

The common people are concerned not just about the safety of their own deposits. They are equally concerned about the overall orientation and performance of the banking system. For all Modi’s rhetoric of taking banking to the masses, banking has been becoming increasingly expensive for common users who are having to pay user charges just to keep their own money. We have seen how big corporate borrowers get away even after turning wilful defaulters even as farmers, microfinance borrowers and other small borrowers like students, jobseekers and traders are subjected to endless harassment and even driven to suicides for failing to repay their small loans on time. Pensioners and middle class consumers depending on banks for ensuring a steady return on their savings are having a tough time with falling interest rates.

Depositors’ interests are hurt not just in the rare cases of bank collapses but equally when banking becomes unsafe and expensive for common users and the financial resources generated through hard-earned public savings are used to promote private profits. Common people should all therefore make common cause with bank employees to stall the disastrous idea of bank privatisation. Just as the farmers have won with their own united struggle and popular support, bank employees too deserve wider support and cooperation in the battle against privatisation and for saving Indian banks and financial sector.