Since last one month, around 80 workers of ITI Ltd have been picketing at the gates of ITI Ltd, Bangalore against the illegal termination. 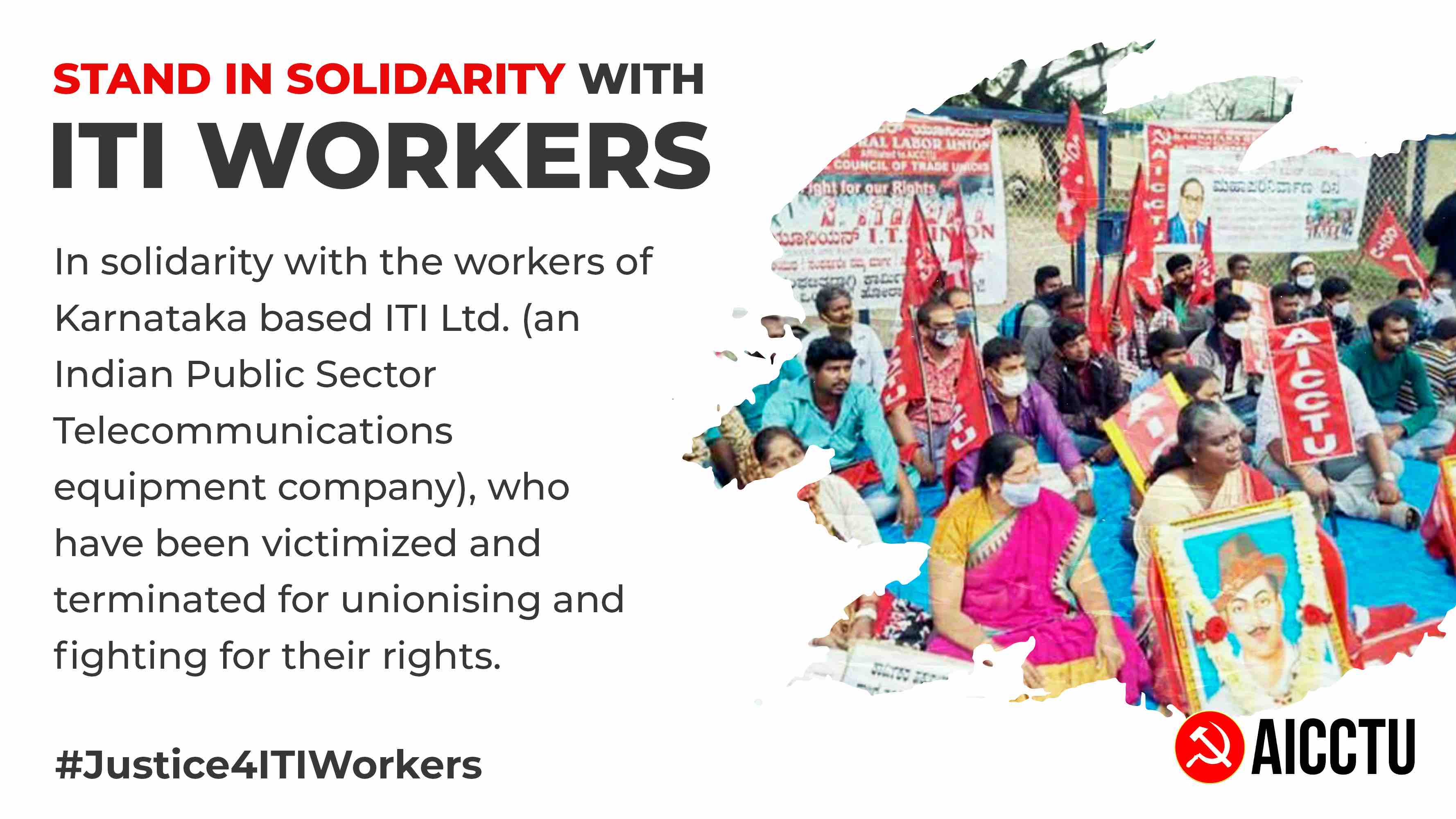 An online campaign was organised by workers of Banglore based ITI Ltd (A public sector telecom manufacturing company) against the illegal retrenchment and denial of labour rights. The campaign was spearheaded by All India Central Council of Trade Unions (AICCTU) Karnataka unit, to which the workers are affiliated. Communist Party of India (Marxist-Leninist) Liberation (CPIML), All India Students Association (AISA), All India Progressive Women’s Association (AIPWA) and Revolutionary Youth Association (RYA) along with AICCTU coordinated the campaign that begin in form of a Twitter Storm at 7pm on 04 January. The campaign used the hashtag #Justice4ITIWorkers highlighting the struggles of the ITI Workers.

Bengaluru ITI has sacked 80 workers for forming a union. An independent union is the bare minimum for a democratic workplace.@DoT_India @LabourMinistry@AshwiniVaishnaw #Justice4ITIWorkers

"They have taken untold millions that they never toiled to earn,
But without our brain and muscle not a single wheel can turn."
- Solidarity Forever Song#Justice4ITIWorkers
Reinstate all @ITILTDINDIA
workers! End labour exploitation and contract system! pic.twitter.com/5p40o6F7xz

Since last one month, around 80 workers of ITI Ltd have been picketing at the gates of ITI Ltd, Bangalore against the illegal termination. The workers were terminated on 01 December 2021. These workers were specifically targeted because they had been vocal against the abysmal working conditions and labour exploitation by ITI Ltd. The terminated workers in course of their struggle decided to form a union under the banner of Karnataka General Labour Union (affiliated to AICCTU). By throwing workers to the streets, ITI Ltd. is pushing their families to the streets, including their children.

This was despite specific advice by the Regional Labour Commissioner that ITI Ltd. was required to comply with Section 33 of the Industrial Disputes Act, 1947, and not change the conditions of service of the workers concerned with the dispute.

Throwing workers to the streets after they have given their sweat for @ITILTDINDIA is unjust. ITI take the 80 workers back to duty.
@CmdIti @AshwiniVaishnaw @DoT_India @PMOIndia @LabourMinistry#JUSTICE4ITIWORKERS pic.twitter.com/d7gEYNIxM5

The coordinated online campaign witnessed participation of large number of members of people’s movements and civil society who univocally demanded that ITI Ltd should end its anti-labour activities and reinstate all workers. The campaign also garnered global solidarity, with trade unions from Greece, Maldives, Bangladesh, Malaysia, Palestine and many countries from Europe and Maghreb and Arab Region expressing their support to the struggle of ITI workers.

We extend our gratitude to the @Wftu_eurof for their message of solidarity in the just struggle of the workers of @ITILTDINDIA.

Workers of the world, unite! pic.twitter.com/P1Hkt5oGtX

The struggle of these workers is not only the struggle of workers of ITI Ltd. It is reflective of the condition of workers of various public sector enterprises who have despite long years of service continue to be called “contract workers” and deprived of their rights. Various public sector enterprises, including HAL, BHEL and BEML employ large number of workers in this fashion effectively denying them their most basic rights.

The need of the hour is to take serious action against such shameful practices and to give a strong call for the complete eradication of the baneful contract labour system.

The ITI workers are determined to intensity their struggle until all workers are reinstated and ITI Ltd. puts an end to unfair labour practices.