Skip to main content
Statement on Economic Survey and Budget

Amidst Pain and Misery in Covid Pandemic, Economic Survey and Budget rubbing salt on peoples wound by calling it Amrit Kal 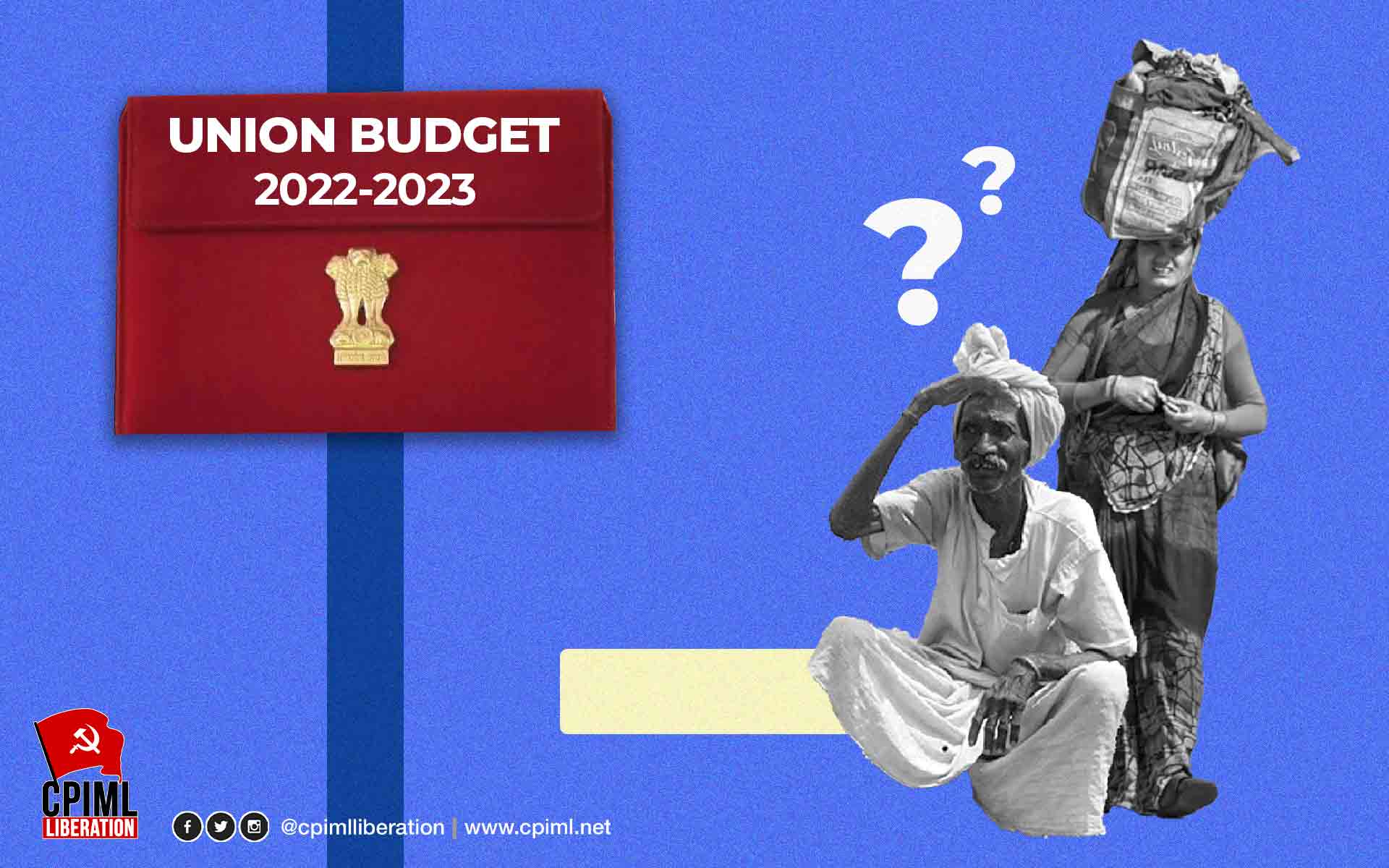 Budget for the ultra-rich, More Hardships for the Unemployed, Farmers and the Poor

According to Modi government's repeated past promises, 2022 was to have been the year of doubling of farm income. Budget 2022-23 is conspicuously silent about this. Agricultural investment in Budget 2022 remains stagnant and there is no direction to fulfill the core farmer demand of assured MSP for all crops.

The Oxfam Inequality Report published on the eve of the Budget 2022-23 recorded a massive increase in economic inequality in India, showing that the income of 84 per cent of households in the country declined in 2021, but at the same time the number of Indian billionaires grew from 102 to 142. The Budget has chosen to exacerbate this inequality by announcing further reduction in corporate tax and giving no relief or income augmentation for the poor.

Amidst declining growth, India is reeling under massive unemployment (CMIE data showed that 5.2 crore Indians were unemployed as of December 2021). Budget remains criminally silent about creation of jobs and income guarantees for the common people.

The finance minister’s speech avoided even a passing mention of life-saving schemes like MNREGA, let alone making any commitment towards an urban version of MNREGA, which had been recommended by a parliamentary committee.

The penchant for finding new marketable terms suitable for catchy headlines of Godi Media persisted in Budget speech of Finance Minister Nirmala Sitharaman when she defined the present period as ‘Amrit Kal’. While crores of fellow citizens struggle to survive, ironically the FM claimed that this budget is not for mere one year but contains the vision of India at 100 and thus is a statement of visionary govt for next 25 years!

What was missing in budget speech was any concrete assessment of big-ticket announcements of this very Modi government for this very year-2022 i.e. doubling of farm income, Housing for All, Power for All. This is the penultimate full budget in this term of Modi-II Govt which had promised a “5 trillion economy by 2024”, but the Budget was silent on this. The Budget also shows no signs of increasing budget allocation to meet the Government’s exaggerated claims of providing relief to the rural poor, agriculture labourers, farmers and migrant workers.

The Economic Survey claims that real growth in 2021-22 was 9.2 percent, taking the Indian economy above pre-covid levels, and that tax collection showed a jump of more than 67 percent. The reality is that this supposed jump in tax revenue too is attributed to sucking up people’s savings and looting their little pockets even amidst the misery of lockdown and pandemic by a record increase in tax collection on essential items of everyday use including petrol and diesel which is reflected in record collection of Union excise duties in revised estimates for 2021-22 which has jumped to Rs 3,94,000 lakh Crore. To put this in context, it was also higher in previous pandemic year at Rs 3,91,749 in 2020-21 but was only at Rs 2.39 lakh Crore level in pre-pandemic year of 2019-20. The second major source of claimed jump in tax revenues comes from withdrawal from RBI surpluses which is pegged at RE of Rs 1,47,353 Crore for 2021-22 and budgeted at Rs 1,13,948 Crore for 2022-23; which amounts to selling household gold in distress. In the medium term, the public debt of Central Govt was Rs 58.66 lakh Crore in 2014-15 when BJP govt came to power but it now stands at 117.04 lakh crore. The reason for this is continuous hesitation of BJP Govt to tax Corporates and HNIs (High Net-worth Individuals) which are known funders of their elections. This puts pressure on public finances and cuts window for public and social welfare expenditure from perspective of human development.

While the Government sucked up people’s savings by the increase in petrol and diesel tax rates, withdrawal of RBI surpluses, and continuous selling spree of PSEs, the budget for the forthcoming year has only cut down on subsidies, and has stagnant allocation for important sectors like Agriculture, Education, Health, Rural development from peoples perspective to offer. The Govt plans to cut subsides on food to Rs 2,06,831 Crore in coming year from revised estimates of Rs 2,86,469 Crore for 2021-22. Similarly, for fertilizers it wants to cut subsidies to Rs 1,05,222 from RE of Rs 1,40,122 Crore.

The allocation for Agriculture and Allied Activities is pegged at Rs 1,51,521 Crore (RE 2021-22 Rs 1,47,764 Crore), for the Covid-hit Health sector is a mere Rs 86,606 Crore (RE Rs 85,915 Crore), and Rural Development Rs 2,06,293 (RE Rs 2,06,948 Crore). Considering the impact of inflation this is actually a cut in allocation in real terms. In Education there is slight increase of 18 percent to Rs 1,04,278 Crore but considering the fact that lot of efforts towards supplementing the education of children which got hit in these two years, the limited increase doesn’t look sufficient.

The middle classes were expecting some relief as it has also suffered during the pandemic in the form of relaxation in income tax rates but govt did not change income tax slabs. The Corporates continue to enjoy India’s lowest Corporate tax rate in the world as people are made to share the revenue burden with collection from indirect taxes reaching same level as direct taxes.

After the sale of Air India, the so called 'strategic disinvestment' policy of selling out Central Public Sector Enterprises (CPSEs) continues with on-going process of divestment of NINL (Neelanchal Ispat Nigam Limited), LIC and other public institutions. This is highly detrimental to the health of country's economy.

The FM's announcement to create 60 lakh jobs without providing any roadmap makes it more of a jumla than the actual promise.

Internationally, crude oil prices are picking up (reflecting a likely tightening of liquidity by major central banks which will may hit FDIs and FIIs, on which Modi Govt put over-reliance for sustaining growth). India’s own WPI index at double digit level, which indicates in the direction that even the government’s artificial strategy of addressing aggregate demand shortage through credit infusion announced first in the celebrated 20 Lakh Crore relief package is now reaching its limit. Still the Modi Government has failed to provide any fiscal stimulus to the economy either through immediate relief to people and/or hike in public investment at a substantial level. With even the Credit route option in crisis how can the Indian economy achieve 8 to 8.5 percent level of growth in 2022-23 as claimed in Economic Survey is anybody’s guess! It will not be out of order to point out that growth was less than 5 percent in 2019-20, the pre-covid year.

Budget 2022 is thus a betrayal of youth, farmers, workers and common people, even as it panders to India’s billionaires.