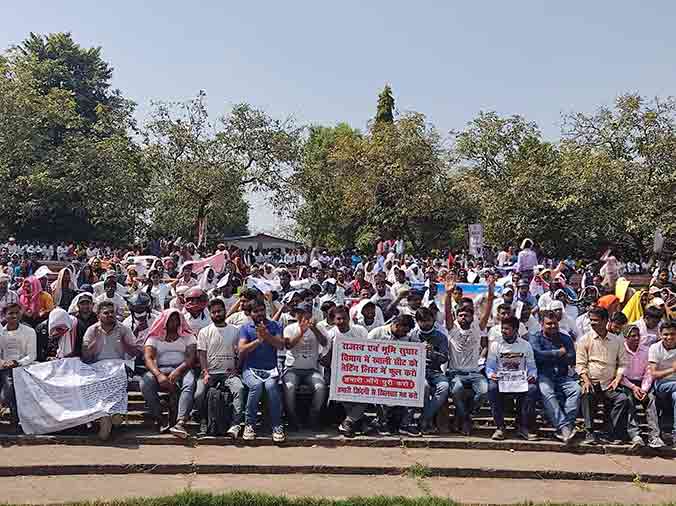 Thousands of students gathered at the mass convention held in Patna on 9 March against the Nitish government's betrayal of its electoral promise of 19 lakh jobs, and demanded employment with dignity and recruitment with justice.

Addressing the meeting, Comrade Manoj Manzil said that today the government is privatizing the railways, thereby shutting down the biggest employment sector in the country. More than half of the teacher-staff posts in Bihar are lying vacant. Large numbers of posts lie vacant in departments such as Health, but the government is not making appointments to any of these posts. Today thousands of students and youth have gathered here against the government's anti-youth policies, and we announce a decisive struggle on the issue of employment.

He said that the Assembly session is going on currently and the government must answer why it has not implemented the promise made at the time of election. He said that resolutions passed at this convention will be submitted to the Chief Minister of Bihar on 10 March. The resolutions will include: complete all pending appointments without delay; implementation of the complete appointments calendar; job advertisements must include fixed timeline for appointments; bring out a white paper on vacant posts; call a special Assembly session on the issue of employment.

Apart from the above demands, a dharna will be organized in the railway complex to demand an end to privatization of railways, to issue a railway calendar, and immediate recruitment to all vacant posts in the railways including posts that have been scrapped. This movement will continue on a parallel basis as long as the Assembly session lasts, till 31 March, and District level dharnas will also be organized.

Sandeep Saurabh said that the Modi and Nitish governments both have betrayed students and youth. Now this government has stopped talking of the 19 lakh jobs, whereas demonetization, the unplanned lockdown and pro-corporate economic policies have consistently cut down jobs in the organized and unorganized sectors. Job opportunities are rapidly declining but our governments do not pay any heed.

Ajit Kushwaha said that the issue of ending unemployment in the country which has the highest number of youth is nowhere on the government's agenda. The people in power are not bothered about employment for youth but are busy creating hate and divisiveness in the country through communal Hindu-Muslim polarization. National assets are being sold at throwaway prices. Industries are in bad shape. The need of the hour is to work with all our might to save national assets and fight on the issue of employment.

Candidates recounted their struggles and sufferings at the convention and said that the whole process from the final result declaration to appointment takes years and years. The appointment process is kept pending. No exam result is declared at one go; there is always one issue or the other. This is a mockery constantly played with the future of students and youth by our governments.

The proceedings were conducted by AISA Bihar State President Vikas Yadav. The Presidium comprised the MLAs and leaders from the various candidate groups. AISA-RYA activists from across Bihar were present in large numbers at the mass convention.