Today (30 January) on the 74th anniversary of Gandhi's martyrdom, history came alive in Bihar's Arwal. You may be wondering what special connection this small district in Bihar could have with Gandhi's martyrdom.

It started in 1933, when a small library was set up in Arwal which soon became a rallying centre for the local youth. In 1942, eleven people became martyrs (Keshwar Ram, Ramkrit Singh, Khakhu Paswan, Mogul Gope, Jaijai Ram Singh, Jairam Saw, Kanhai Saw, Harmohan Bhagat Paswan, Bhim Paswan, Suchit Yadav, Indradev Singh) in the Quit India movement. Several of them were regular visitors to the library. The library was known as Friends National Library. In the wake of Gandhi's assassination, the library was renamed as Gandhi Pustakalay. 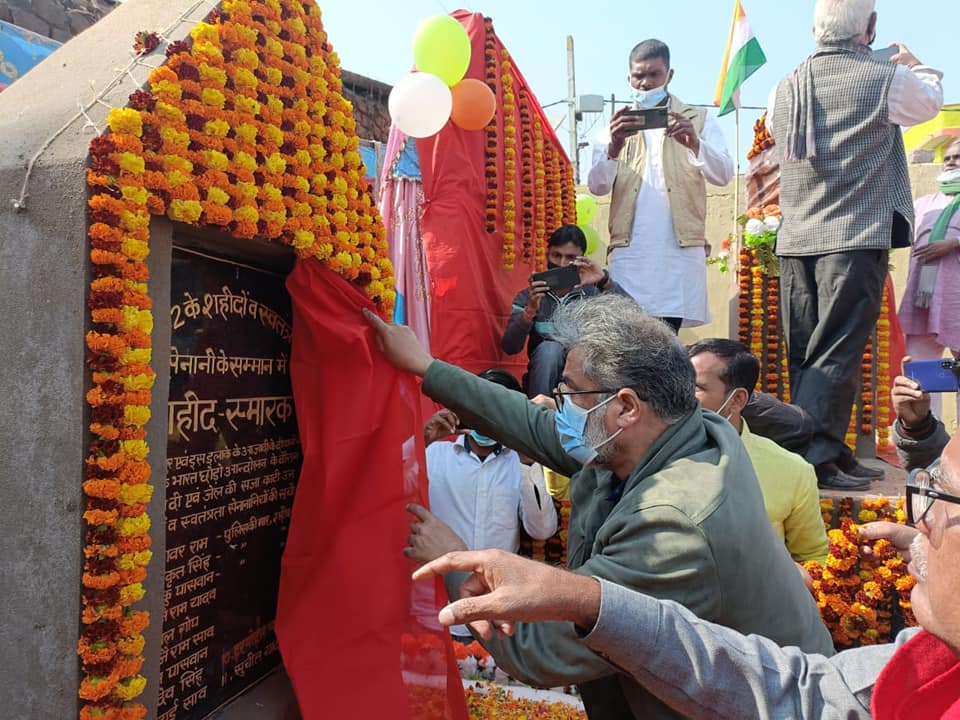 In the 2020 Assembly elections, Comrade Mahanand of CPI(ML) was elected to the Bihar Assembly as the MLA from Arwal. Across the Sone, Comrade Sudama Prasad was also reelected from Tarari in Bhojpur. The CPI(ML) contingent of a dozen MLAs includes two more MLAs from the region - AISA leader Comrade Sandeep Saurabh from neighbouring Paliganj segment in Patna and Rambali Singh Yadav from Ghosi in Jahanabad. Comrade Sudama now heads the Library Committee of the Bihar Assembly. A key task undertaken by the committee is renovation of abandoned and dilapidated public libraries in Bihar.

Today, as part of the Freedom75 "We, the people of India" mass commemoration campaign, the Gandhi Pustakalay started a new chapter. Renovation work has begun. A bust of Gandhi was installed in the campus with public contributions. Two memorial columns have also been erected with the names of 1942 martyrs and 1986 massacre victims inscribed on them.

A public commemoration event held on the occasion felicitated family members of the 1942 and 1986 martyrs. Among them was Dhanwa Kunwar, wife of 1942 martyr Khakho Paswan. She must be in her mid 90s, her only complaint was her impaired hearing. The presence of people from different walks of life reflected the popular support for this new chapter of the Gandhi Pustakalay.

Arwal was also an important centre of the 1857 war of independence. Jivdhar Singh, Amruddin Khan and Sheikh Gulab are names people still fondly remember as their own local heroes of 1857. After Gandhi Pustakalay, Khabhaini panchayat is getting ready to commemorate the 1857 heroes on the coming May 10.

The Hindutva fascists had expected the assassination of Gandhi to pave the way for a coup to derail the new Republic. But it only exposed and isolated them while modern India moved on with its new Constitution. Seven decades later as India faces a more lethal and all-out fascist offensive with the elected government of the day, armed with draconian laws and spying technology, working overtime to subvert the Constitution and lynch squads and hate assemblies masquerading as 'Dharm Sansads' going berserk on the ground, history has become a key battleground. We need to learn our lessons and not be condemned to repeat its tragedies. We must draw inspiration and strength to carry forward the legacy of the freedom movement and the quest for a modern democratic India. The inheritors of the secular democratic legacy of India's freedom movement must again summon all their strength to foil the fascist design. The progenies of Bhagat Singh, Gandhi and Ambedkar must dethrone the successors of Savarkar, Godse and Golwalkar.