Skip to main content
India at 75: The Siege Within
Dipankar Bhattacharya 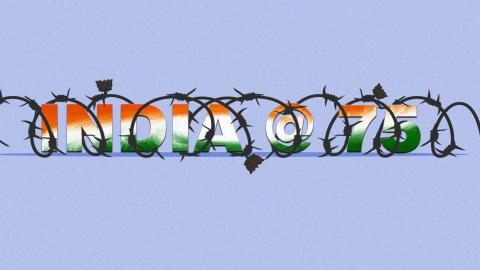 2022 is the 75th anniversary of India's independence and the 125th anniversary of the birth of Netaji Subhas Chandra Bose. Desperate to appropriate the icons of India's freedom struggle, the Modi government has designated January 23, the birth anniversary of Subhas Chandra Bose as the official beginning of India's Republic Day celebrations and announced the decision to install a giant statue of this iconic freedom fighter at India Gate. From the response of Bose's daughter we know that the committee formed to plan the commemoration of Bose's 125th birth anniversary never met and the decision to install a hologram statue pending the sculpting of the real one came after the rejection of the Subhas Chandra Bose tableau proposal put forward by the West Bengal government. The war of appropriation of iconic figures from history has perhaps never got this ugly.

What is much more alarming than this war of appropriation is the relentless falsification of history and brazen subversion and negation of the constitutional framework and founding spirit of our Republic. The Modi government has started delinking India's freedom movement from the context of freedom from British colonial rule. Increasingly and ever more loudly, the government is creating the mythical narrative of a protracted freedom movement spanning centuries of what it calls 'Muslim invasion' of 'Hindu India'. Instances of conflict between a Hindu ruler and a Muslim king in medieval India, or development of Hindu pilgrimage centres are all being woven into this narrative of a protracted battle for freedom.

A government of India Press Information Bureau publication called New India Samachar recently made an astounding claim by posing the Bhakti movement as the precursor to the 1857 uprising and clubbing Raman Maharshi (1857-1950) and Swami Vivekananda (1863-1902) with Chaitanya Mahaprabhu (1486-1534) as icons of the Bhakti movement. Subsequently, the PIB called this clubbing an 'inadvertent error' while continuing to describe Bhakti movement as the foundation of the freedom struggle. The Bhakti movement arose primarily as a protest movement against caste oppression and religious bigotry and spread the message of harmony, syncretism and humanism. If there is anything common between the Bhakti movement and 1857, it is this strong bond of communal harmony. The British colonial rulers were mortally afraid of this unified uprising of Indian people and did everything possible to widen and sharpen the communal divide in the wake of 1857, leading eventually to the 1947 partition of India.

Accompanying this mischievous manufacturing of a false, distorted narrative of Indian nationalism and freedom struggle is a relentless assault on the spirit and framework of the Constitution. The government is working overtime against the constitutional objectives and commitments. While the Republic is pushed in the opposite direction of secularism, socialism and democracy, citizens are being systematically robbed of their rights. Narendra Modi is repeatedly calling for a correction of what he calls an excessive emphasis on rights. He tells us that we as a people have been wasting our time by fighting for our rights. He wants to subject rights to duties by making duties fundamental and rights increasingly selective and conditional. This burdening of the citizens with their duties is also a clever ploy  to free the state and the government from its own constitutional duty of guaranteeing the rights of citizens.

A fake narrative of nationalism and freedom struggle and growing subversion of the Constitution - India at 75 is thus faced with this two-pronged siege from within in addition to a declining economy and all the external threats and global challenges of the present times. Seventy-two years ago when the Constitution of India came into force, we, the people of India, resolved to constitute India into a sovereign socialist secular democratic republic and to secure comprehensive justice, liberty and equality to all its citizens. This popular resolve is facing its biggest test today and the future of modern India depends on our ability to pass this test. We cannot afford to lose this battle. Win we must.