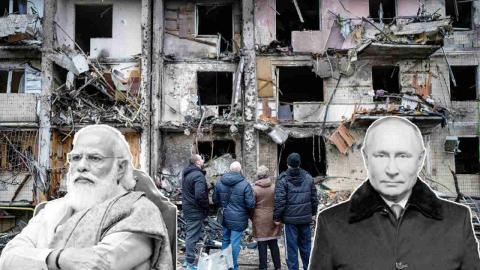 Two weeks into the invasion, Putin’s war on Ukraine shows no signs of abating. The shelling has become more intense and widespread over several parts of Ukraine which are seeing growing civilian casualties and an exodus of refugees. Ukraine is being subjected to massive devastation. According to Ukrainian forces, Russia too has suffered major military losses, in terms of both personnel and weaponry. As the economic and human cost of the war grows, the repercussions are being felt across the region and beyond. Three rounds of talks between Russia and Ukraine have not yet resulted in a ceasefire, let alone any diplomatic framework of lasting peace.

For us in India, Putin’s Ukraine war has also glaringly exposed the utter failure of the Modi government in the international arena. One of the key points of the Modi regime’s self-congratulatory propaganda revolves around the supposed rise in India’s global stature under Modi. Among India’s Prime Ministers, Narendra Modi has undertaken the greatest number of foreign visits. Now Indian foreign policy appears virtually paralysed in the Ukraine crisis with India only managing to abstain repeatedly in the United Nations. Most crucially, India accounts for the highest number of foreign students studying in Ukraine – more than 20,000 out of a total of 76,000 according to 2020 data of Ukraine government, and the Modi government failed miserably in ensuring their safety and timely evacuation.

Amidst the growing threat of Russian invasion of Ukraine, the first advisory issued by the Indian Embassy in Ukraine on 15 February only asked Indian nationals whose stay was ‘non-essential’ to consider leaving Ukraine temporarily. The next day Indian nationals ‘desirous of travelling back to India’ were ‘advised to book available commercial flight tickets’. Two days later, three special Air India flights were announced with tickets priced quite exorbitantly. By the time the Embassy asked all students to leave, Ukraine had closed its airspace and direct flights from Ukraine were ruled out. Students were then asked to reach neighbouring countries by whatever means possible. Little did they know that even after walking long stretches in freezing cold without water or food many of them along with other students from Asia, Africa and the Middle East would be turned away from railway stations and at borders by racist security forces.

Even as the government failed to ensure safe and timely evacuation of Indian students stuck in Ukraine, it turned the trauma of the students into an event management propaganda campaign and used it as a campaign theme in the protracted elections to the UP Assembly. The evacuation drive was named Operation Ganga and four ministers were dispatched to ‘oversee’ the operation while the real need on the ground was arranging conveyances to transport students to railway stations and airports and ensuring their safe evacuation in coordination with concerned countries. Students being brought back were expected to chant slogans hailing Narendra Modi, and in Uttar Pradesh, Yogi Adityanath had a televised interaction with students on arrival in brazen violation of the spirit of election ethics and model code of conduct. South Indian students have complained that their names were removed from evacuee passenger lists and replaced with North Indian students’ names by Embassy officials assisted by members of the BAPS Swaminarayan Sanstha, an international organisation which is a prominent element in Hindutva’s diaspora network.

Students narrating their plight to the Indian media or sharing videos appealing for help have also been subjected to a veritable vilification campaign by the Sangh brigade. The traumatised students were portrayed as privileged kids who could not clear entrance examinations in India, and the blame for the evacuation fiasco was also laid at their doorsteps. A BJP leader from Karnataka even rejected the demand for bringing back the body of Naveen Shekharappa, the Karnataka student killed in shelling in Kharkiv, by saying that it would occupy the space for eight students who were alive (an absurd as well as callous claim, since bodies are transported in the hold of a plane!). It is well known that Indian students migrate to Ukraine primarily because of the increasingly prohibitive cost of medical education in India, and at a time when the needed the support of the Indian government they were subjected to insults and indifference.

The refusal of the Modi government to condemn Putin’s unjust war on Ukraine points to a policy paralysis in matters of international relations. Because of the Modi regime’s growing strategic partnership with Israel and United States, India has stopped supporting the Palestinian cause, and now, afraid of antagonising Russia, the government refuses to stand in support of Ukraine’s existence as a sovereign nation. It will be a mistake to see India’s abstention on the Ukraine war as a sign of independence of Indian foreign policy or India distancing herself from the US in the international arena. Under Modi, India’s strategic subservience to the American design of global hegemony has only increased manifold. Underlying India’s support for Russia at this juncture is also the Sangh brigade’s reverence for Putin as a far-right ‘strong leader’ and their glorification of the war on Ukraine as an ideal template for Indo-Pak disputes.

In Russia more and more people are defying police crackdown and the government’s jingoistic ultra-nationalism to call for an immediate end to the war. They are demarcating Russia’s national interests from Putin’s belligerent brinkmanship and the dictatorial design to suppress domestic dissent by launching war on a neighbour. It is time for us in India too to see India’s own interests in a different policy frame in contrast to the myopic vision of the Modi government. When a big power threatens to bomb a neighbour out of existence, India must stand in support of the latter’s sovereign existence and right to self-determination. Any continuation of Putin’s Ukraine war is a recipe for a rise in global oil prices, a global food crisis, and an intensification of the arms race and power rivalry in Europe with ominous global ramifications. India cannot afford to have a paralysed foreign policy at this juncture. The need of the hour is a pro-active Indian role for an immediate end to war and restoration of peace.