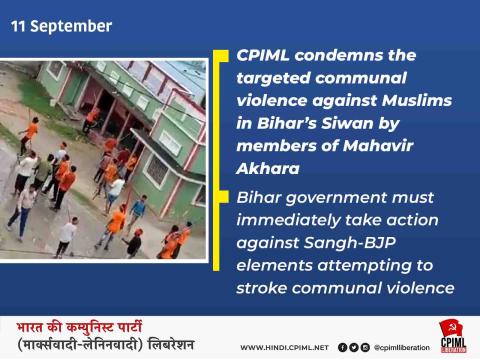 CPIML Bihar State Secretary Kunal expressed deep concern over the attack by the Mahaveeri Akhada procession on 8 September on Muslims while they were reading Namaz at Purani Bazaar in Badharia, Siwan. He said that the BJP is desperate after being ousted from power in Bihar and is bent on inflaming passions across the state. The Bihar government must take strict action in this matter. The most worrisome thing is that the administration has become completely BJP-ized.

He said that according to reports received, members of the Muslim community were reading Namaz at Purani Bazaar in Badharia on 8 September, which is a predominantly Muslim area. On the same day the Mahaveeri Akhada took out a procession in which people from other villages also participated. The Badharia area is, as it is, considered to be a sensitive area. Despite being aware of the possibility of an untoward incident, the administration deployed only 3 police personnel at the spot.

As the procession, armed with sticks and raising slogans to inflame communal passions, neared the Masjid they became aggressive and started beating up the Muslims who were reading Namaz. They broke doors of houses and set shops afire. The police personnel on the spot remained silent spectators. The Muslim community also replied to the escalating aggression by members of the procesdion. Brickbats and stones were pelted from both sides. The situation could be brought under control only when more police arrived after one hour.

CPIML Siwan District Secretary Hansnath Ram said that upon receiving the information senior party leader Naeemuddin Ansari reached the spot. CPIML holds the District administration responsible for this incident. They should have taken the necessary precautions, knowing that this is an area prone to such incidents. The role of Siwan DM, SP and SDPO has been suspect in past incidents also, where they have been found openly pandering to BJP people. The administration had earlier also remained passive in the incidents during Muharram processions at Hathoda (Hussainganj) and Vaishakhi.

Now the administration is arresting innocent people. So far an FIR has been registered against 25 Muslims and 10 Mahaveeri Akhada processionists. These statistics point clearly to the administration's BJP bias. It is the victims who are being persecuted, so much so that a 70 year old Muslim man and a 12 year old minor Muslim boy have been thrown into jail. This is a totally anti-Muslim action by the administration. The CPIML will organize a march on 12 September to protest against this action.

CPIML demands immediate removal of the BJP-minded DM and SP from Siwan. The Bihar government must identify the people implicated in actions generating communal frenzy and take strict action against them and guarantee that no innocent person will be falsely implicated.