Skip to main content
Prisoners of Conscience Under Modi Regime 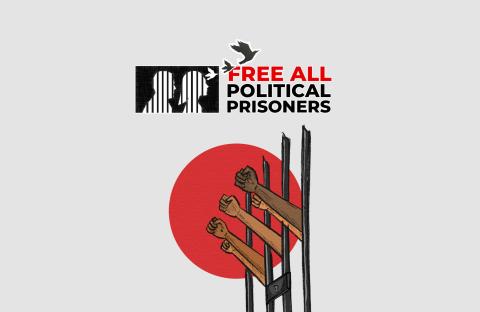 After spending 711 days in detention, Siddique Kappan was granted interim bail on 9th September. He is still in jail, for there is another criminal case pending against him, in which he is yet to get bail. A journalist by profession, Kappan, was arrested by the police when he was en-route to cover the rape and murder of a young Dalit woman at Hathras, Uttar Pradesh. Slapped with unsubstantiated charges by the police, labelled an anti-national and vilified by the right wing for speaking truth to power, Kapan reflects a story arch familiar to many, who like him are a part of a growing community of political prisoners in India.

Since the BJP’s rise to power in 2014, the list of people -ranging from human rights activists to lawyers, and journalists to students – being persecuted for their identity and their fidelity to fighting for democratic and progressive rights, has grown rapidly. Starting from the arrests related to Bhima Koregaon in 2018 and protests against CAA in 2020 to the recent arrests of activist  Teesta Setalvad and journalist Mohammad Zubair, the current regime is bent on imprisoning any person who speaks uncomfortable truths and exposes their lies. Whether it is the arrests of Umar Khalid and scores of other anti-CAA activists in cooked-up criminal charges of the Delhi riots, or Anand Teltumbde, Prof. Hany Babu, Gautam Navlakha and others in the Bhima Koregaon case, the one common feature is the draconian Unlawful Activities (Prevention) Act, (UAPA) 1967 under which bail is a rare possibility. Just a few days ago, the Bombay High Court rejected the bail petition of Prof. Hany Babu. Of course Varavara Rao was given medical bail by the Supreme Court, but only after the same was refused to Fr. Stan Swamy leading to his death in custody. Importantly, the acquittal rate under the UAPA is 97.2%, and a recent PUCL report relies on NCRB data to show that of 8,371 persons arrested under UAPA, only 235 were convicted between 2015-2020.

For long it has been said that the worst of Indian state excesses is tried, tested and perfected  in Kashmir, and then executed across the rest of the country. It is the same with political arrests. Over 5000 Kashmiris were arrested following the Modi government’s decision to abrogate Article 370. Politicians, lawyers, businesspeople, activists and journalists across the valley were thrown in far flung jails or kept under house arrest.   In November 2021, noted human rights activist, Khurram Parvez from Jammu Kashmir Coalition of Civil Society (JKCCS), a group based in Srinagar which publishes regular reports on the human rights violations and excesses committed by security forces in the Valley, was arrested on accusations of "terror-funding". The National Investigation Agency (NIA) took charge and he was arrested  under the draconian anti-terrorism law, making it impossible for him to get bail. Earlier this year, Kashmiri journalist Fahad Shah was detained under the Jammu and Kashmir Public Safety Act (PSA) on the grounds that he had been “misguiding common masses by circulating fake news against the government and its policies.

The pro-corporate neo-liberal policies of the state has given a free hand to the big corporate houses to loot natural resources dispossessing and displacing Adivasis and other vulnerable communities. The resistance of these communities is viewed as a threat, which the state persecutes and silences through state repression and criminalisation of democratic protest. The concerted struggle of the Adivasis of Jharknad against this corporate loot and dispossession, in the form of the Pathalgadhi movement was met with collective punishment where more than 10,000 Adivasis were accused of sedition. Earlier this year, scores of villagers and activists were arrested for protesting against JSW’s mega steel plant in Dhinkia village, Jagatsinghpur district Odisha. This has become the norm today, and the full force of the criminal law is used to quell democratic protests.

The pattern is clear. What is being criminalized are not mere actions but any belief opposing the government. The State cynically instrumentalises investigations and weaponises an already unjust criminal justice system to lock up anyone standing up against its unjust policies. Thus, the so-called investigations into the Delhi Riots, translates into targeting of anti-CAA activists and Bhima Koregaon becomes the avenue to target Dalit intellectuals to human right activists and lawyers. The extent to which this regime would go is perhaps revealed in the arrest of Jignesh Mevani from Gujarat by the Assam police and the Delhi Police’s action of flying journalist Zubair to Bangalore to recover his laptop for the mere act of publishing a public tweet.

Draconian laws and an increasingly pliant judiciary have served as the regime’s best friends in executing its political vendetta. Given that all cases that have been foisted have scant or false evidence, and will in all probability not withstand legal scrutiny, the rule book of the State has been to make the process the punishment. The success for the state here lies not in proving their case in Court but in entangling prisoners in a long-winded and cruel criminal process.  This is nowhere as clear as in the case of Bhima Koregaon where despite overwhelming evidence by international security organizations that the Pune Police planted fake evidence in the devices of two political prisoners, no steps have been taken to either hold the police account, or release those falsely accused.

With trials yet to begin in most cases, political prisoners - many of whom are aged - are suffering from growing mistreatment at the hands of jail authorities who are refusing access to even the most basic of amenities like mosquito nets and telephones. Last year, Stan Swamy, one  among the BK-16, was a victim of institutional murder, after being denied timely medical treatment in jail. Today, others like Vernon Gonsalves, GN Saibaba and Gautam Navlakha find themselves similarly struggling with their health, with no signs of respite from the State.

This vindictive quelling of any voice of democracy and dissent is an essential feature of the Indian brand of fascism and those jailed can only be called “political prisoners”. Indeed, democracy, right to dissent and the fundamental right to free speech are hollowed out by the present regime flexing its muscles by using the criminal justice system and draconian laws to strike terror against those opposing its fascist policies.

In this context, it is necessary to remember that historically, political prisoners have sought recognition of their separate identity as political prisoners vis-à-vis other prison inmates not for seeking privileged treatment, but more to assert the legitimacy of the struggle or beliefs while delegitimising the state power behind their incarceration. As during the freedom struggle when Bhagat Singh and other revolutionaries demanded that they be recognised as political prisoners going to the extent of undertaking hunger fasts in prison for this purpose, today too, those incarcerated for their political beliefs and activism indeed are “political prisoners”.

We must fight back. We must fight for the spirit and the values that these prisoners embody, and most importantly must fight for their release. A society that imprisons its dissenters is a society that imprisons progress. And through this long drawn fight for release of all political prisoners, we must constantly affirm and reaffirm our solidarity with them and give them hope that there is a community of people outside prison rooting and fighting for them.

To this end, we must strive to keep up the fight for political prisoners and for their families continuous and on-going.

We are looking at this event as a first of many, and as a springboard for a wider campaign with the following demands: 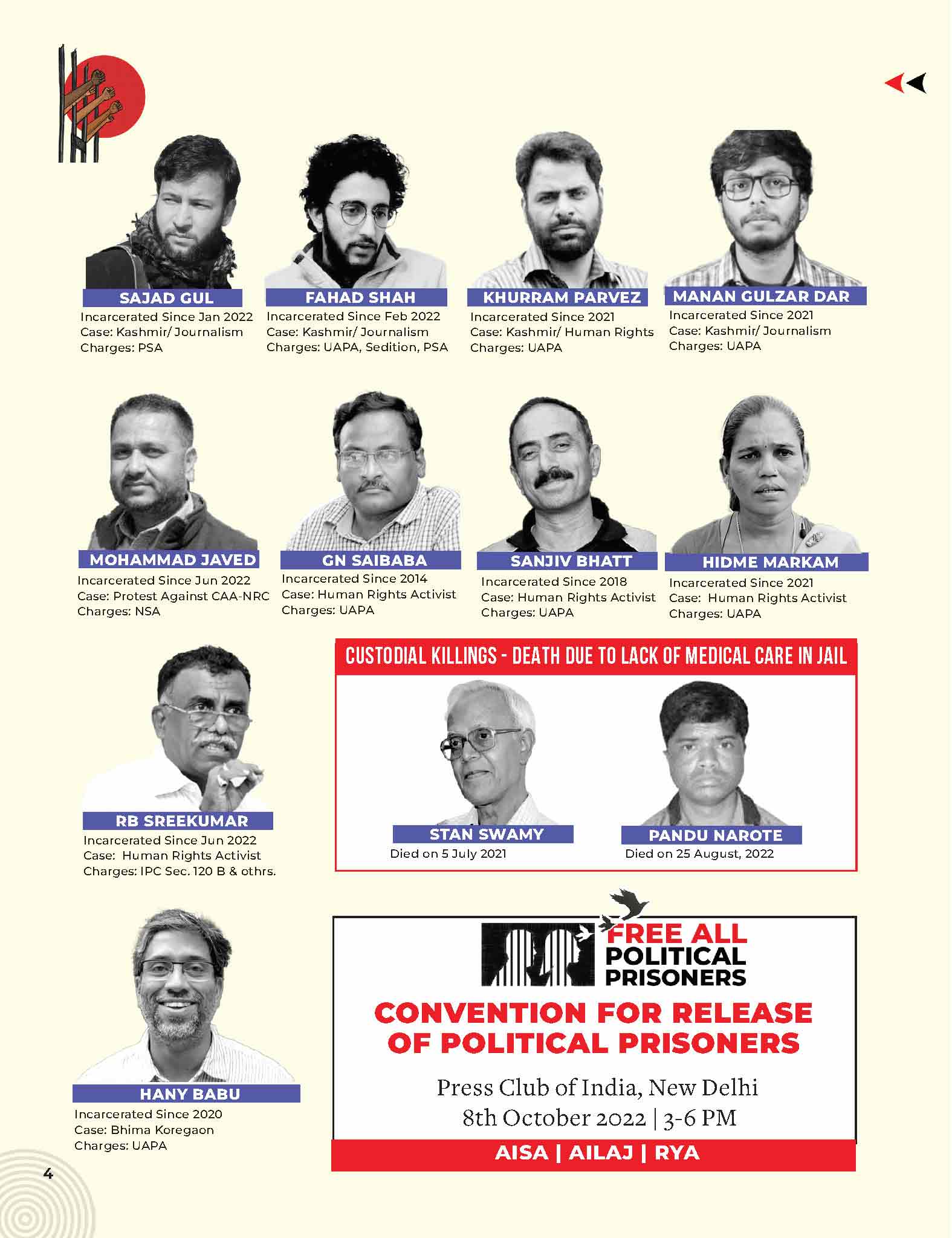