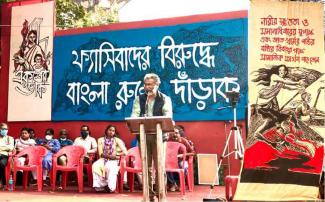 Against Fascist Offensive, For Democracy-Diversity-People’s Rights

Ever since the BJP came into power in 2014, our Constitution, democracy, human rights and freedom of expression are under continuous attack. Common people of the country have been denied their fundamental rights and struggling for survival. Systematic assaults are designed against minorities, dalits, farmers, workers, students, women, activists, intelligentsia and dissenters. When the entire country is suffering from Covid outbreak, lockdown disaster and economic crisis, Modi Government is busy in looking opportunities for the Ambanis and Adanis. Anti people labour codes, farm bills, education policies have been introduced meanwhile to serve the new Company Raj. RSS – BJP’s machinery of hatred and communal politics backed by the corporate can only be challenged by people’s movements. Bihar elections had shown us the utmost need to be united against this fascist force and shift the narrative from the divisive agenda set by BJP and Sangh to the agenda of common people.

Bengal elections are approaching and BJP is desperately trying to achieve electoral gains at any cost. The legacy of freedom struggle and successive left democratic movements in Bengal had shaped its progressive, broad and inclusive atmosphere. BJP and RSS is vehemently trying to ruin this rational and diverse cultural fabric of Bengal and co-opting Bengal icons by their false propaganda. On the other hand, there have been many genuine demands of the people of Bengal for their lives and livelihoods, citizenship, health and education, jobs and social security especially after successive attacks of Covid and cyclone Amphan.

To champion the people’s voice in the upcoming 2021 Bengal election against the powerful fascist force, a ‘Peoples Charter’ of citizens of West Bengal ‘Ekusher Daak Manusher Dabi’ (Peoples Demands: Clarion Call for 2021) has been formulated in continuity with demands raised in the course of long struggles by the people of Bengal. The charter was drafted by the inputs from vast cross sections of society including grass root people, farmers, workers, students, representatives of various mass movements, civil rights activists, artists, writers, environmentalists, academicians etc.

For a month, conversations were held about what people’s issues need to be raised to turn the elections into a movement asserting the people’s agenda. These conversations resulted in the final charter of demands which was officially released in the Citizens’ Convention on February 8 at Kolkata Yuva Kendra Auditorium. Kumar Rana, Kaushik Sen, Dipankar Bhattacharya, Moushumi Bhowmik, Amit Bhaduri, Tanika Sarkar, Gautam Bhadra, Maroona Murmu, Shamim Ahmed, Naba Datta, Punyabrata Goon were among the many conveners of this convention. The charter enumerates the demands for health- food security- education- dignified employment for all, workers rights, rights of farming and farmers, equal citizenship, forests and forest dwellers, people’s empowerment and autonomy, social justice and equal rights, environment, federal structure, rights to language and culture. On a day when PM Modi demonised dissent and instigated his followers to launch a witch-hunt against 'andolanjeevi' activists, several hundred progressive citizens met in Kolkata to adopt the people's charter and save Bengal from the BJP's fascist expedition.

The convention was inaugurated with musical performance by Naihati Agnibina Sanskritik Sanstha. Kumar Rana greeted the participants and briefly discussed about this timely initiative amidst the alarming rise of the BJP and RSS in Bengal. Veteran leader Sanat Roy Chowdhury read the condolence note in memory of the martyrs of farmers’ movement and victims of lockdown, Cyclone Amphan and Uttarakhand disaster. A set of ten resolutions were then placed by Shamim Ahmed and greeted with enthusiastic approval from the participants. The convention demanded withdrawal of the farm laws, labour codes, NRC- NPR- CAA, NEP, EIA draft Notification 2020. The convention also took firm stand against privatization of public sectors, against divisive communal politics of RSS BJP, against all draconian laws imposed on activists and dissenters; and upheld the Constitutional rights and secular democratic fabric of our country.

Addressing the Convention, CPIML General Secretary Dipankar Bhattacharya explained how BJP’s majoritarian and communal politics is the biggest threat for our democracy. He emphasized on Bengal’s historical legacy as a bastion of progressive values and democratic movements and the need to build a united strong resistance against fascist penetration in Bengal. He also said that we must take lessons from ongoing farmers’ movements and recent Bihar election.

Taking ahead the message of ‘Ekusher Daak Manusher Dabi’; vigorous campaigns, meetings and conventions were organized at sub urban and rural areas of South Bengal. Com Dipankar Bhattacharya addressed mass conventions at Uttarpara and Dhaniakhali in Hooghly and Burdwan town followed by Bethuadahari, Nakashipara and Dhubulia in Nadia district during the period of 13-18th February.