Skip to main content
Commentary 03 November 2021
Air India Sell Out: A Deal for Which Taxpayers Have to Pay the Bill 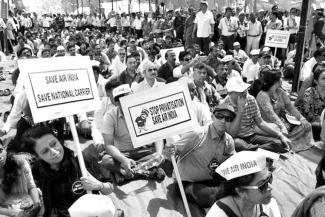 Have we ever heard of a deal where the seller has to shell out a large sum in exchange for handing over a huge legacy enterprise worth Rs. 52000 crores of assets and solid infrastructure? This is exactly what is happening in Modi’s much-touted ‘New India’; the government is selling the iconic Air India to the Tata Group on terms which will result in losses for the public exchequer. But the moot question is: Why would the Tata Group buy a perennially loss making enterprize, when it already has two loss making companies in the aviation sector (Vistara and AirAsia India)? Why would inherit another company which registers losses year after year?

Let us look at the details of the Air India sales deal between the government of India and the Tata Group. The government will pay nearly seventy per cent of Air India’s debt, which is Rs. 46,262 crores, as part of this deal, while the Tata Group will actually spend only Rs. 2,700 crores in cash and one fourth of the remaining debt accounting for Rs. 15,300 will be taken care of by them. Technically speaking, government has to spend many times more than the buyer!

This sell-out will have a huge human cost too. In the very first month, Air India’s new owners have ordered its many employees to vacate the residential premises allotted to them and made their intention clear in matters of how Tatas are going to deal with Air India workmen in future. According to the deal, the Tata Group has an obligation to retain the employees for one year. After one year, they can offer a voluntary retirement scheme, which in practical terms happens to be a forced retirement plan in the neoliberal setup. At present, AI has 12,085 employees of which 4,001 are on contract. Out of 8,084 permanent employees nearly 5,000 are due to retire in next five years. The AI subsidiary Air India Express has 1,434 employees. After one year, Tatas will be able to retrench employees on the basis of performance or disciplinary actions, besides having an option to offer a VRS plan or wage cuts. Air India may not have been an ideal establishment in terms of protecting trade union rights, fair wages and employees’ legal rights, but it was faring much better than private airlines. Air India unions are demanding scrapping of this deal and the future of thousands of employees is now at stake. On the other hand, the Prime Minister Modi has termed this sale a step that will give new energy to the aviation sector of India.

With this acquisition, the Tata group has secured a near monopoly over half of India’s aviation sector by adding around 144 in-operation aircrafts to its combined fleet of three air carriers. In addition, Air India will add to Tatas prowess an immense infrastructure spread globally, a very high prestige and brand value, and highly skilled and professional workforce, along with 4,400 domestic and 1,800 international landing and parking slots in Indian airports as well as 900 slots overseas in the airports in other countries across 42 destinations including more congested airports like Heathrow, New York, Singapore, Dubai and Hong Kong. The Air India Express has additional 651 slots. Air India holds licenses to operate on a large number of long and mid-distance international routes. These have opened a plethora of opportunities before the Tatas that can turn it into a bigger monopoly in Indian aviation. The Tatas now have a chance to overcome the recurring losses in Vistara and AirAsia on the back of expanded infrastructure, without having to spend an extra penny. Moreover, Tatas now have control over very large real estate assets owned by the Air India.

Air India has never been a loss making venture if one takes into account the deliberate mismanagement and waste of resources led by the political establishment since 1990s. This was aimed at getting rid of the public sector to pave the way for the private sector. Air India was made to bleed out its revenues in various ways. Even then, this company is making operating profits, which was Rs. 1,787 crore in year 2019-20. Its earnings before interest and taxes (EBITDA) stood in positive for the past many years.

The confusion being spread by the right-wing WhatsApp propaganda is that Air India pays its employees higher wages in comparison to the private companies and hence it accrued its losses. This propaganda is not founded on facts. The Air India’s salary bill accounts for nearly 12 per cent of its revenues, which is almost at par with the salary bills of many private aviation companies.

With the entry of private companies in India's aviation sector in 1990s, the basic economic model of the national carrier was kept unchanged thus making it uncompetitive in the face of new private airlines. Why the Air India establishment did not see any need to restructure the company’s fare structure vis-a-vis new private players is quite incomprehensible even to a layman. But a bigger jolt came during the UPA-1 government, when the Civil Aviation Ministry under Praful Patel decided to purchase 111 aircrafts, 68 for Air India and 43 for Indian Airlines, thus creating a debt which was to be repaid through revenue earned. This was done in a very unprofessional and non-transparent manner. It is since then that Air India is continuously bleeding out its revenues to pay interests even as the debt burden continues to rise till date.

Later the Comptroller and Auditor General of India (CAG) called this purchase “a recipe for disaster”, which wasted money and became the basic reason for the national carrier to become financially crippled. In that year, Air India suddenly became indebted by Rs. 38,500 crores, and since then was made to pay interests at high rates from whatever revenue it had generated each year. Interestingly, Air India had asked for the purchase of 28 planes during 1990s. It took 8 years before the final approval was given in 2004. In the same year Praful Patel’s ministry went into a hurried acquisition mode by increasing the number of aircrafts to be purchased to 68. No convincing explanation was given for this misstep which CAG criticised as a purchase done when there was no demand for more planes.

The CAG had pointed out that no cost benchmarks were set up by the ministry before buying aircrafts and assumption of increase in revenues of the Airlines was based on unrealistic and faulty premises. The same report had also questioned the merger of Air India and Indian Airlines calling it ill-timed and done without factoring in integrated operations. The Air India losses escalated nearly ten-fold within few years of this merger.

The trajectory of Air India is not different from other PSUs. This is the time for everyone to join hands to build a stronger resistance against the sell-out of economic sovereignty and freedom. This is crucial at the present juncture when attempts are on to give away more public sector undertakings in the Oil and Insurance sectors to Modi’s cronies.