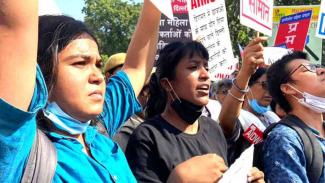 AISA held a protest at the Home Minister Amit Shah's house in Delhi on 17 October demanding that Ajay Mishra Teni, the BJP leader accused in the massacre of farmers at Lakhimpur, be sacked as Minister of State for Home.

Shockingly, women students at the protest were subjected to sexual assault by the Delhi Police. Policewomen kicked two of the protesters - Neha Tiwari and Shreya Banerjee Kapoor, in the genitals and partially disrobed them, exposing undergarments to the male policemen present.

Courageously, Shreya wrote a public post documenting her traumatic experience. Students' and women's groups protested at the Delhi Police HQ demanding that the ACP Pragya Anand who gave the orders to assault the women students, be sacked.

Meeting the protestors, senior Delhi Police officers assured that a vigilance enquiry would be ordered into the incident.

But it is clear that this kind of sexual assault is part of a pattern to deter women students from protesting the Modi Government. Last year, Jamia women students had complained that police which invaded the campus had kicked some of them in the genitals. Women students of JNU and DU have also faced attempts to disrobe them and sexually humiliate them during protests. One one occasion even a woman journalist was assaulted - and a senior police officer had apologised and "explained" that the offending policeman had assumed she was a student - as though the assault would have been justified had she been a protesting student.

The Home Minister is directly responsible for the killing of farmers - and the sexual assault on women students outside his home, reminding him of his responsibility.