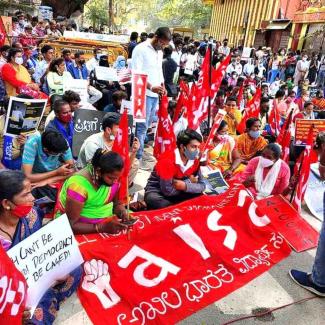 There has recently been a spate of vigilante actions and moral policing in Karnataka. According to a report in The Print, there have been 11 such cases in the past month in Karnataka, where inter-faith friendships and relationships have been targeted. Couples and even friends and colleagues belonging to different faiths have been threatened and harassed by right-wing vigilante groups for just going home together from work, visiting a restaurant and spending time together. A Muslim man in Belagavi was beheaded by members of a Hindu-supremacist outfit Sri Ram Sene (Hindustan).

Instead of condemning these episodes, Karnataka Chief Minister Basavaraj Bommai, in a press meet in Mangalore in Dakshina Kannada, justified increasing moral policing and criminalisation of inter-faith relationships by right wing activists. He said that "actions and reactions” of vigilantes were not just inevitable but necessary in order to check “immorality” and those “hurting sentiments in society".

Not just the Chief Minister but various other ministers in the Karnataka government have abdicated their constitutional responsibilities and taken upon themselves the job to teach 'moral values" to citizens. These so-called ‘moral’ values are essentially blatant justifications and displays of Islamophobia and misogyny. Home Minister Araga Jnanendra, reacting to the Mysore gang rape case, indulged in a shameful exercise of victim blaming. According to him, the victim and her partner should not have visited 'dangerous' places in Mysore. The Health Minister K. Sudhakar, at a World Mental Health day event at NIMHANS in Bangalore, spoke of the “healing powers” of the traditional family system in India. For Sudhakar, the shifts in traditional family norms are responsible for several social and mental problems we are seeing today. At the function in NIMHANS, he spoke against choices exercised by women to not marry, to not have children or to have children through surrogacy. For the BJP and the RSS, independent choices made by women are most often anathema, especially when these choices challenge patriarchal norms and misogyny. Jnanendra and Sudhakar, as well as Chief Minister Bommai, are the latest in a long line of RSS-inspired leaders who seek to push back against independent women who do not subscribe to their notion of Hindutva.

Karnataka has been seeing increasing anti-woman and anti-Muslim vigilante actions by groups such as the Hindu Jagran Manch, the Bajrang Dal and the Sri Ram Sene. These groups are emboldened by statements issued by ministers and BJP leaders justifying their actions. In 2002, the then chief minister Narendra Modi used the ‘Action-reaction' logic to justify massacre of hundreds of Muslims. And now, in Karnataka, BJP leaders are following suit and using the same language to spread hate in the state. When the chief minister of a state openly indulges in communal hate mongering and defence of patriarchal norms, it showcases a constitutional crisis. These 'Ministers', who have taken oath on the Constitution of India are misleading  citizens by their support to saffron vigilantes. The real victim is the Indian Constitution, for constitutional morality is lost.