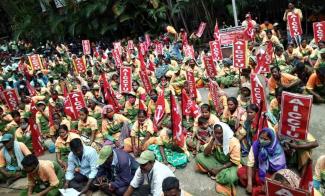 The BBMP Powrakarmika Sangha has started a Jaatha across the city of Bengaluru from 9th October, 2021 to highlight the vulnerable conditions under which powrakarmikas are forced to work and demand for dignified working conditions.

The Jaatha was inaugurated by Com Ravanamma, a senior leader of the Union, who retired as a powrakarmika last year and who has been at the forefront for the rights of powrakarmikas from the beginning.

Powrakramikas (Safai Karmacharis) despite being frontline workers at the forefront of the war against COVID-19 are forced to work under extremely vulnerable working conditions. Instead of taking steps to ensuresafe working conditions, the Prime Minster took to theatrics during COVID-19 and asked people to bang thalis and light candles for the frontline workers. Pots were banged but powrakarmikas continues to work under vulnerable conditions.

The Jaatha consisting of powrakarmika leaders from across the city, is going around the city of Bengaluru highlighting this failure of the Government. It demands for dignified and safe working conditions and that all powrakarmikas be made permanent and wages of a minimum of Rs. 35,000/-. The work performed by powrakarmikas is caste ordained, being done by primarily Dalit women, who are subject to caste atrocities and sexual violence. The Jaatha demands an immediate end to such caste based atrocities and sexual violence of all forms. The Jaatha also demands that the Municipal Corporation ensure the provision of housing to all of them and education to all their children, in order to ensure that they are not forced to enter this caste-ordained work.

The Jaatha starts at 4 am moving with the powrakarmikas to the muster where their attendance is taken at 6 am. Workers are not provided any form of transportation and are forced to either walk the distance or come through autos in large numbers, an unsafe mode of transport. Meetings are held at 6 am, 10.30 am and 2 pm when workers congregate for attendance. In between the Jaatha moves through the streets and markets. Several people came forward expressing their solidarity to the demands of the powrakarmikas and said that they would stand with the workers who ensured the health. In the evening the Jaatha congregates at the homes of powrakarmikas. The BBMP Powrakarmika Sangha has bought a film dedicated to those workers who lost their lives to COVID-19, on the condition of powrakarmikas during the COVID-19 lockdown. Director Raju who works as a powrakarmika and directs short films has made a film on the Inauguration ceremony and the Jaatha, which. Both these films are screened at the homes of the powrakarmikas, which is followed by a discussion.

The vulnerable working conditions of powrakarmikas are a clear example of the way in which the caste system, patriarchy and the neo-liberal agenda of the State has condemned a historically oppressed community into a caste-ordained profession and pushed an entire community of people into a cycle of poverty. The Jaatha is putting forth a clear message against such structures of violence and demanding for what is rightfully due to the powrakarmikas.