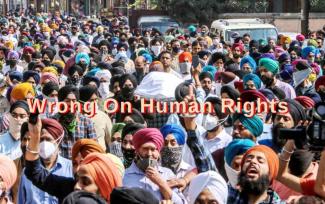 (A version of this piece appeared in the Indian Express.)

An event marking the 28th Foundation Day of India’s National Human Rights Commission (NHRC) revealed much about the current state of human rights in India. By definition, defending human rights - rights that recognised to reside in every human being and are not conferred by the state – requires vigilant scrutiny over and curbs on the power exercised by the State. The NHRC is India’s statutory human rights body – intended to act as an independent watchdog to scrutinise and monitor the actions of the Indian State and its agencies.

At this event, though, the watchdog could easily be mistaken for a loyal lapdog of the very institutions it is in theory supposed to monitor.

The current chairperson of the NHRC is retired Supreme Court judge Arun Mishra, who as a sitting judge had hailed PM Modi as a “versatile genius” and an “internationally acclaimed visionary who can think globally and act locally.” Mishra chose the NHRC foundation day as an occasion to lavish Union Home Minister Amit Shah with praise, declaring: “It is due to you, Mr Shah, that a new era has now begun in Jammu and Kashmir.”

Mishra is referring to the abrogation of Article 370 of India’s Constitution in August 2019 that stripped J&K of statehood. Since then, the Modi regime has controlled the territory of Jammu and Kashmir without even the nominal rituals of democratically elected state-level representation, let alone the right to express any form of democratic protest. The petition challenging the constitutionality of that move has gathered dust in India’s Supreme Court for the past two years. In this “new era”, this Brave New World, Kashmiri Muslim government employees are being summarily dismissed from their jobs without any public enquiry, on the grounds of mere “association with” any person who sympathises with self-determination for Kashmiri people.1  Further, the “new era” has brought back an old spectre: that of civilians being killed by terrorist outfits. In 2021, 28 civilians have been killed by terrorists, 23 of whom were Kashmiri Muslim, five were Kashmiri Pandit or Sikh, and two were Hindu migrant workers.2

From the dais of this human rights platform, PM Modi took aim at India’s human rights defenders: a beleaguered and extremely vulnerable species. He accused them of seeing “human rights violations in certain incidents but not in other similar incidents” and declared that such a “selective” human rights lens “tarnishes the nation’s image.” The fact is that India’s human rights defenders have held every shade of government responsible and accountable to human rights and civil liberties. Sudha Bharadwaj, a leading human rights defender who is in prison for the past three years thanks to flimsy charges under a draconian law, exposed rights violations in Chhattisgarh’s Bastar when India’s Home Ministry, then under the control of Modi’s rival the Congress, had unleashed “Operation Green Hunt” that resulted in the rape, massacre and displacement of adivasi civilians in the name of combating Maoist insurgents. Human rights bodies like the PUCL and PUDR held the Congress regime accountable for the massacre of Sikhs in Delhi in 1984 just as they held the BJP and Modi accountable for the massacre of Muslims in Gujarat in 2002.

In fact, it is Mr Modi who is guilty of the “selective” gaze of which he accuses his critics. He tweets his concern for a cricketer’s thumb injury3 but is silent when the son of his deputy Home Minister mows down protesting farmers with his SUV; or a Muslim man is riddled with bullets by police in BJP-ruled Assam outside his home who then proceed to desecrate his body with a thrashing, and allow an embedded photographer to practice long jumps onto the man’s abdomen.

Mr Modi has repeatedly declared4  that “No Hindu can ever be a terrorist, and if he is a terrorist, he can never be a Hindu.” He said this in an election speech, accusing the Congress regime of having insulted Hindus by charging the Hindu ‘sadhvi’ Pragya Thakur with a bomb blast at Malegaon – a woman he chose to field as a member of parliament from his party. He thus recognises terrorism not by the nature of an act but selectively, by the identity of the perpetrator. He Amit Shah has likewise explained how the selective tool of the Citizenship Amendment Act will recognise undocumented Hindus, Sikhs, and other non-Muslims as “refugees” while helping to weed out undocumented Muslims as “termites”. To protect a whole category of persons from ever being accused of terror charges based on their faith as Mr Modi does; or to declare a whole category of persons as less than human based on their faith as Mr Shah does – these are the very essence of fascism which selectively strips entire communities of their rights as human beings, i.e their human rights.