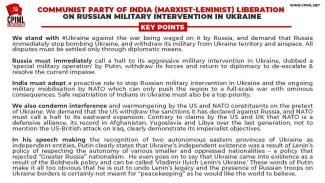 🔴 We stand with Ukraine against the war being waged on it by Russia, and demand that Russia immediately stop bombing Ukraine, and withdraw its military from Ukraine territory and airspace. All disputes must be settled only through diplomatic means.

🔴 Russia must immediately call a halt to its aggressive military intervention in Ukraine, dubbed a 'special military operation' by Putin, withdraw its forces and return to diplomacy to de-escalate & resolve the current impasse.

🔴 India must adopt a proactive role to stop Russian military intervention in Ukraine and the ongoing military mobilisation by NATO which can only push the region to a full-scale war with ominous consequences. Safe repatriation of Indians in Ukraine must also be a top priority.

🔴 We also condemn interference and warmongering by the US and NATO constituents on the pretext of Ukraine. We demand that the US withdraw the sanctions it has declared against Russia, and NATO must call a halt to its eastward expansion. Contrary to claims by the US and UK that NATO is a defensive alliance, its record in Afghanistan, Yugoslavia and Libya over the last generation, not to mention the US-British attack on Iraq, clearly demonstrate its imperialist objectives.

🔴 In his speech making the recognition of two autonomous eastern provinces of Ukraine as independent entities, Putin clearly states that Ukraine’s independent existence was a result of Lenin’s policy of respecting the autonomy of various smaller and oppressed nationalities – a policy that rejected “Greater Russia” nationalism.  He even goes on to say that Ukraine came into existence as a result of the Bolshevik policy and can be called 'Vladimir Ilyich Lenin's Ukraine.' These words of Putin make it all too obvious that he is out to undo Lenin’s legacy and the presence of Russian troops on Ukraine borders is certainly not meant for “peacekeeping” as he would like the world to believe