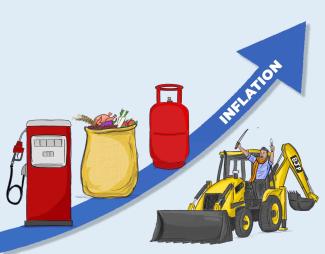 India’s southern neighbour Sri Lanka is reeling under a terrible economic crisis. The crushing debt burden of this island nation has landed it into an unprecedented chaos marked by skyrocketing prices and massive shortages of basic necessities. The people of Sri Lanka are up in arms and are seeking an end to the reign of the Rajapaksa brothers who have been running the show in Sri Lanka as President and Prime Minister for more than a decade. President Gotabaya Rajapaksa is desperately trying to save his chair by dropping his brother Mahinda from the Prime Minister’s post, but the popular unrest is continuing unabated.

The Modi government tells us that Sri Lanka is paying the price for economic mismanagement, but what it seeks to hide is that the Indian economy is showing similar signs of crisis. The wholesale price index has been registering double-digit rise continuously for last thirteen months and in April it crossed 15%, the highest since September 1991. Along with rising prices, the common people are also hit hard by vanishing jobs and falling income. On top of it, the Indian rupee has plummeted to its lowest level which means an ever-growing burden on account of imports and repayment of external debts.

The debt-GDP ratio of Sri Lanka has crossed 100%, in other words Sri Lanka is borrowing more than it produces, and Sri Lanka has just defaulted in debt repayment for the first time. In the case of India the debt-GDP ratio is only a little less, hovering now between 85 and 90%. By next March, the Modi government will have added a massive 100 lakh crore to India’s total debt since Modi's ascent to power in 2014.The only cushion that India has, compared to Sri Lanka, is in terms of forex reserve but that too has already started eroding. Since the beginning of Russia’s war on Ukraine, India’s forex reserve has already been depleted by about 36 billion dollars, bringing the overall reserve below 600 billion dollars. These forex reserves, besides paying for a growing trade deficit, will need to be used for 256 billion dollars of debt repayment by this September, bringing it down to dangerous levels.

Let us remember that Sri Lanka’s per capita GDP is still nearly double the Indian figure, and in terms of most indicators of socio-economic development Sri Lanka has been significantly ahead of India.  If Sri Lanka has today landed in this massive mess, it was not caused by some sudden economic disruption triggered by the pandemic and compounded by the Ukraine war. It has been rooted in years of neglect of small-scale domestic production and consumption needs of the common people while the regime went for big borrowings for big infrastructure projects, all underpinned by the pro-corporate, pro-imperialist and anti-people neoliberal economic model which Sri Lanka was the first in South Asia to adopt.

India too is trapped in a similar trajectory. An orchestrated blitzkrieg and vacuous hype in the name of big projects define the Modi model of development. But in reality, very few new assets are being created, while existing public assets, built over decades with people’s money, are being cornered by the likes of Adani and Ambani for a pittance. As key assets and infrastructure get concentrated in the hands of chosen cronies, the medium and small sector stands decimated, pulling down industrial growth and employment to an abysmal low. As per the Government’s own admission in Parliament in December 2021, a total of 8,81,254 Indians have given up their citizenship since 2015. This includes a large number of HNIs (high net-worth individuals) as well. This mass exodus can only be explained as a consequence of the climate of economic gloom accompanied by rising communal hate: another milestone of the Modi era.

Agriculture was the only sector which had escaped the noose of complete corporate control and yielded some positive growth even during the lockdown and pandemic when every other sector came to a grinding halt. But even though the farmers’ resistance has compelled the government to repeal the three laws designed to facilitate a total corporate takeover of agriculture, the restructuring of agriculture in favour of corporate interests continues unabated. There is an alarming shift away from food grains to cash crops, thereby posing a grave threat to India’s food security.

The people’s upsurge has meant that the Rajapaksas can no longer take the Sri Lankan people for granted and divert the people’s attention away from the basic issues of survival and needs and rights of the common people through campaigns of violence and persecution against Sri Lankan Tamils and Muslims. In India, the government not only continues to live in denial mode, it is busy inflicting more injuries and adding more insults by imposing a divisive and destructive agenda on the people. While the economy deteriorates rapidly and prices of food and fuels and other basic necessities go through the roof, the government is busy bulldozing the homes and livelihood of the poor, Muslims in particular, and digging up mosques and monuments in the name of discovering and building temples.

This divisive and destructive campaign has escalated alarmingly since the BJP’s renewed victory in Uttar Pradesh. Festivals have been turned into spectacles of aggressive communal mobilisation, and bulldozers have been let loose on Muslim homes and shops in state after state. From Kashi and Mathura to Taj Mahal and Qutub Minar, the vandals of the Sangh brigade are getting ready everywhere to hijack history. After excluding hijab-wearing Muslim women students from accessing higher education, the BJP government in Karnataka is now allowing open arms training camps for Bajrang Dal goons in educational institutions of the state.

The judiciary, the supposed custodian of the constitutional rule of law in our democratic republic, appears increasingly inclined to side with the executive at this crucial juncture of Indian democracy. The onus is therefore on ‘we, the people of India’, who had resolved to constitute India into a sovereign democratic republic by adopting the Constitution, and to uphold it against all odds. It is time to tell the government loud and clear to either check prices and provide jobs or quit office. Time to say a firm no to the conspiracy of raking up an imaginary past to wound us in the present.