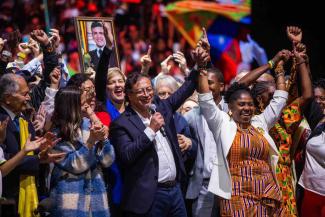 Last year, in 2021, the Latin American country of Colombia witnessed wave of mass uprising against the right-wing government of Iván Duque. The Duque government, riding on neoliberal policies, had introduced a series of anti-people measures including cuts in social security and privatization of healthcare. The brutal state repression against the striking workers, students, and indigenous population in April-June 2021 led to the death of over 80 people, and around 2000 arbitrary detentions.

A year later, in 2022, the people of Colombia, have thrown the government of Duque out of power. In the Presidential elections held on May 29, 2022, left-wing candidate and former member of M-19 movement, Gustavo Petro was elected as the President. Francia Marquez, an environmental lawyer and anti-mining activist was elected as the Vice President, making her the first women of Afro-Colombian descendent of to hold the post.

The results, which were declared on June 19, saw Petro and Marquez’s Historic Pact alliance defeating the Construction business magnate Rodolfo Hernández Suárez in the Presidential elections.

The left-wing Historic Pact has promised to stop the neoliberal onslaught that the country had been witnessing for years under successive conservative governments. The alliance has proposed to battle the issue of hunger by strengthen the state social security system. Progressive agrarian reforms, strengthening the public health system, increasing taxes on the super-rich and promoting green energy are some of the commitments in the Petro-Marquez alliance. Marquez has advocated for more representation of women, Afro-Colombians and indigenous communities; who have been largely excluded from Colombian politics.

This mandate of 2021 elections in historic and significant as the results stem from the people’s uprising and general strikes against the conservative and right-wing policies that had led to increasing poverty, inequality, corruption and state-led violence.