Skip to main content
Editorial 08 November 2022
EWS Reservation makes a mockery of the Constitution and its spirit! 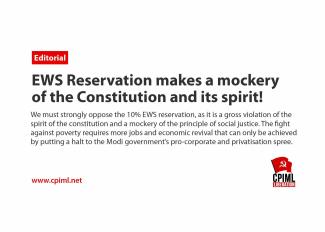 The recent Supreme Court judgement upholding Modi government 10% quota for Economically Weaker Sections (EWS) aimed at providing reservation for forward castes clearly violates the objective and purpose of reservation embedded in the basic spirit of the Indian constitution. The judgement only solidifies the historic injustice against deprived sections. The same was reiterated by Justice S Ravindra Bhat, who gave a dissenting judgement, along with CJI UU Lalit in the EWS reservation judgement who held that: “… this court has for the first time, in the seven decades of the republic, sanctioned an avowedly exclusionary and discriminatory principle. Our Constitution does not speak the language of exclusion. In my considered opinion, the amendment, by the language of exclusion, undermines the fabric of social justice, and thereby, the basic structure.”

When the Indian constitution was taking shape and form as we know today, the reservation policy for deprived sections was woven into it to build an egalitarian India. The same is reflected in the preamble to the Indian constitution which assures “Equality of Status and Opportunity”. Thousands of years of caste based discrimination had pushed deprived sections like OBCs, Dalits and Adivasis into the periphery of the society stripping them of all rights and access. In fact, the word reservation translates to representation, with the spirit to provide representation and equal access to those who have been left out due to historic injustice and discrimination. The same was reiterated in the dissenting judgement as follows: “the total and absolute exclusion of constitutionally recognised backward classes of citizens - and more acutely, SC and ST communities, is nothing but discrimination which reaches to the level of undermining, and destroying the equality code, and particularly the principle of non-discrimination”

The skewed SC judgement is clearly aloof from the ground reality of Indian caste system and its manifestation in everyday lives of deprived communities. The affirmative action or reservation for “backward” communities as mentioned in the constitution and discussed at length in the constitutional assembly debates of November 1948, was intended not as a method of poverty alleviation but for achieving social justice. The SC judgement thus squarely violates the basic spirit of Indian constitution.

In January 2019, just before the general elections Modi government had introduced the move to implement the EWS reservation with parliament enacting the Constitution (One Hundred and Third Amendment) Act, 2019. This enabled the State to make reservations in higher education and matters of public employment on the basis of economic criteria alone. The Act amended Articles 15 and 16 of the Constitution by inserting 15(6) and 16(6) to include reservation for the forward castes.

This aimed at undermining the SC/ST/OBC quotas, as the RSS has been demanding for long. In fact, Justice Bela Trivedi and Justice Pardiwala, who formed the majority opinion with Justice Dinesh Maheshwari, have both in their concurring opinions called for reservations to be reviewed and time limits be prescribed for their continuation. As it is, the system of reservations has been increasingly marked by delays, loopholes and non-implementation, and is now being undermined by sweeping privatisation in education and employment.

The Constitution recognises social and educational backwardness alone to be the criterion for reservations. In other words, the Constitution recognises the principle that reservations are not a tool to address economic deprivation - they can only address (to an extent) systematic social and educational discrimination and exclusion. The claim that the upper castes, even those who are poor, face systematic discrimination, exclusion, and underrepresentation in education and jobs does not bear scrutiny. Joblessness and poverty are a separate problem that can only be addressed by the creation of jobs and better wages - and the Modi Government has signally failed on this front.

The 10% EWS reservation is in reality a misnomer, it is reservation solely for forward castes aimed at diluting the affirmative action policies for deprived sections. Indeed Dalits, Adivasis and OBCs are explicitly excluded from claiming EWS reservation. Even  the eligibility cut-off itself is sham. According to the rules framed for implementation of EWS reservation in education and jobs, the eligibility is annual income of 8 lakhs i.e. Rs. about 67,000/- a month. This makes a mockery of the immense poverty of oppressed communities caused by the historical injustice of caste. The criteria renders the definition of ‘poverty’ meaningless, and fails to effectively target the poor and unemployed among the upper castes.

Modi is by far not the first to moot the idea of a quota for the economically deprived in the non-SC-ST-OBC quota jobs and educational seats. The Narasimha Rao Government introduced a similar measure in 1991, reserving 10% Government posts for “other economically backward sections of the people who are not covered by any existing schemes of reservation”. A nine-judge Constitution Bench of the Supreme Court struck down that measure, observing that poverty alone cannot be the test of backwardness, and holding that social and educational backwardness was the only Constitutional basis for reservations.

The question of social justice and reservation are intertwined and thus can’t be viewed as separate entities. The idea of affirmative action or representation for SCs and STs was core to Dr. BR Ambedkar’s vision of social justice and social mobility for deprived communities. On one hand, the Modi government and RSS are busy appropriating Ambedkar, while on other, they reject his basic thinking on the need for reservations for oppressed castes.

The EWS reservation, thus creates a parallel structure inside the reservation mould, with the clear purpose of introducing a caste system and solidifying the discrimination against historically deprived sections of the society.

The Modi government, which completely failed in generating new jobs and reviving the economy is using EWS reservation as a desperate deflection tactic. The jobs are not eaten away by affirmative action, as Modi and RSS wants people to believe. The jobs, like people’s lives, are being sacrificed by the government at the altar of corporate profiteering and their looting of the country's resources. Today, the unemployment rate in India has surged to 7.77%, with more people being daily rendered jobless and pushed into poverty.

We must strongly oppose the 10% EWS reservation, as it is a gross violation of the spirit of the constitution and a mockery of the principle of social justice. The fight against poverty requires more jobs and economic revival that can only be achieved by putting a halt to the Modi government’s pro-corporate and privatisation spree.