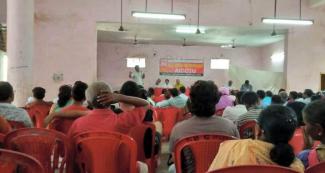 AICCTU held orkshop of young and emerging cadres held at Bhubaneswar on 31 Aug – 1 Sep 2019 had four major subjects: 1. History of The Indian Working Class Movement – Tracing major milestones in the background of economic and political situation and tracing the history of ideological and political struggles and Emergence of Revolutionary Trade Unionism. 2. Challenges of Working Class Movement Today – a) Changing composition, Emerging Challenges; b) Major Issues, Policies, and our approach 3. Existing Trade Union Laws and proposed Codes – Elaborations and Our Approach 4. Social Role and Politicisation of working class. Four papers were also circulated in advance on changing composition of workforce, emergence of AICCTU, codification of laws and on politicization. Resource persons also made power point presentations in addition to delivering lectures.

Understanding latest fascist attacks of Modi led BJP government on the working class and devising strategies to counter it was the central theme of the workshop.

After Dr Mohapatra, Comrade Rajiv Dimri explainined how AICCTU upheld a dynamic theory of the working class that never tried to pit one section against another. Rather, we understood the concept of working class not as a fragmented one but as a holistic concept that integrated and stood for the unity of various sections of the working class. He traced the struggles of working class against class capitulationism and wage brokerage. He recalled the famous slogan of ‘Democratisation of Trade Unions and Politicisation of Workers” that remained the central slogan of AICCTU since its inception. 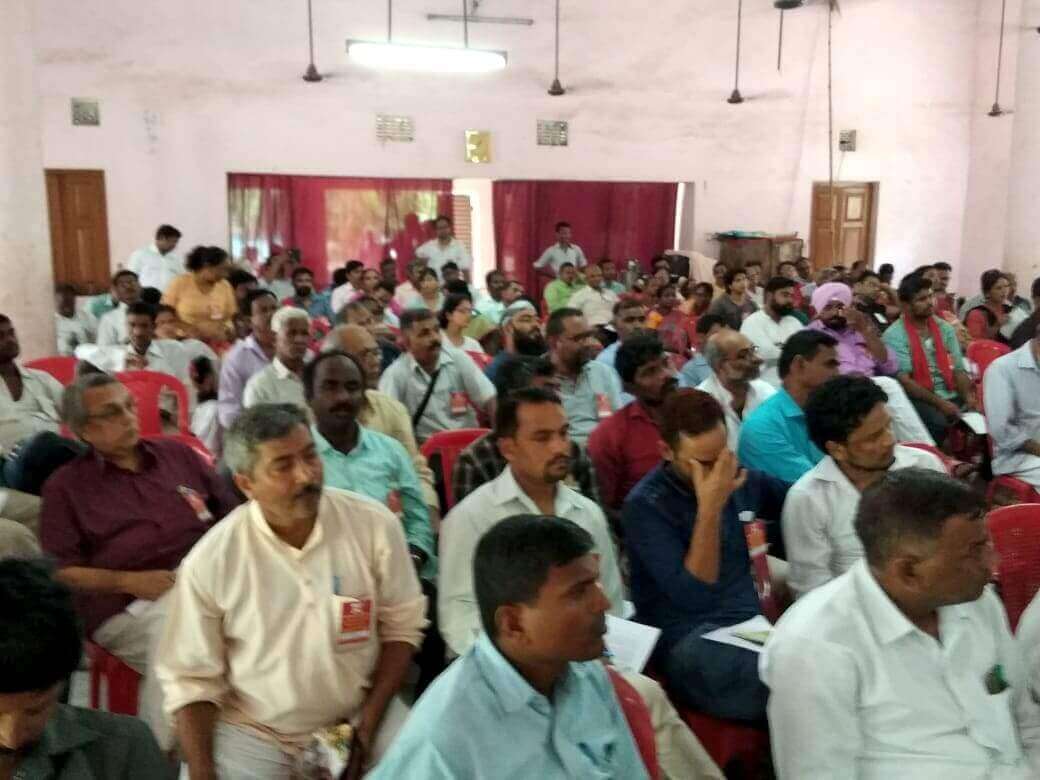 The second session was addressed by two resource persons. Dr Vijaya Baskar, also a labour researcher and economist from Chennai, made a power point presentation, came up with forthright formulations in identifying and specifying various aspects of fragmentation of working class and its backdrop. He also provided a detailed analysis of changing composition, various emerging sections, wage issues, growing unemployment, decreasing labour force participation, particularly decrease of women participation in labour market, increase in per worker productivity and falling real wages, etc. After a detailed analysis of facts, he said that the phenomenally growing number of unemployed is the major pressure on the economy. He said the status of workers is changing frequently and in most cases, workers hold more than one job. Half of recent additions to urban workforce seems to be in the ‘gig’ economy which means insecure, but more visible and also opens potential for mobilization. He also expressed his concerns regarding growth led by service sector and its implications for labour mobilization. Whether NREGA should be an axis of mobilization; whether we should focus on wage issues or non-wage issues are other questions posed to the workshop to think about. He also proposed that the workshop think about how the persistence of huge number of ‘self employed’ is linked to capital accumulation.

Comrade Vidyasagar vividly presented a detailed analysis of changes in government policies right from Nehruvian era to present phase of neo liberal reforms and its connection with changing composition in workforce and emerging newer issues. He made a detailed analysis of transition from Nehruvian phase to neo-liberal phase and also said how they complemented each other while there are ideologues who counterpose each other and consider neo-liberal phase as a negation of previous phase and find Nehruvian policies as state socialism that is far more ‘progressive’. He said that combining neo-liberalism and autocratic rule has given birth to a highbred variety of neo- fascism.This highbred variety is fast spreading in the world to destroy the entire base of democracy in order to serve the big capital. He also said that because of shift in the Indian government’s policies,in post-1991 period, to a more explicitly anti-worker, pro-Capital one, the working class in India suffered massive retrogression – in terms of real wages, quality of employment, working conditions, and fighting strength.

In third session, Comrade Clifton D’ Rozario presented a comparative analysis of existing laws and the major drastic changes being made by the Modi led BJP government in favour of corporates and multinationals. He traced the enactment of various labour laws since pre-independence period and also explained how the new labour codes robbed off all rights and benefits of workers, including job, wage and social security. He said that draft Code on Social Security proposed to close all welfare funds, including ESI, PF, construction and Beedi workers welfare funds and creation of only one social security fund by merging all of them. He explained the pro-employer nature of recently enacted wage code. Its not just an amendment but negation of struggling legacy of Indian working class and complete destruction of existing laws. Laws were not a gift of ruling class but was snatched through struggle and sacrifice by working class. New definition of contract labour and lack of consistency in definition of worker and employee in wage code was also elaborated. Hire and fire, codification of laws, control on inspection, national floor minimum wages – were the demands of industrialists represented by CII in 2014. The Modi government has awarded all to them. The contract labour is institutionalized through this code instead of its abolition. He also recollected Hitlerite Germany where trade union offices were captured and leaders were tortured and killed. Called upon workers to fight against fascist onslaught of Modi led BJP government and also explained the fascist nature of attacks.

The workshop was given four questions to be discussed by eight groups (one question for 2 groups). Construction, industry, sanitation, scheme workers and railways were five groups based on sectors of our work. Tamil Nadu, Puducherry and Kerala were formed as one group while Karnataka and Andhra Pradesh was another group based on language. There was also a general group comprising the remaining comrades. The idea was to discuss the question in groups and to summarise them in a plenary session by one comrade chosen by each group. The discussions evoked a very good response and the method kindled and provoked lot of discussions.

Following were the questions and conclusions:

As a part of the conclusion and also to draw attention towards the issues raised by the questions and also as part of politicization of working class, Comrade Shankar, put forward different sections and categories of workers and also prioritized the focus for organizing and mobilization. He also traced various models of organizing unorganized workers and contrasted them with our practice while suggesting the need for incorporating some of them that can help class struggle while rejecting other forms and patterns of organizing that are apolitical in nature and which can also blunt the edge of class struggle. For example, unionization by offering employment and through running employment generation centres like SHGs and computer centres, etc. Forming forums in innovative ways based on the concrete situation at grassroots was proposed to be a method and structure to facilitate politicization and also to form unions in places where we are absent. Experimenting with newer forms, even if not strictly political but social and others, were also encouraged if that can facilitate class struggle.

Trade unions operating among predominantly women and downtrodden castes like sanitation workers, will have to integrate demands of gender violence and social dignity as part of the movement. In that context, the formation of Safai Mazdoor Adhikar Abhiyaan (SAMMAAN) was also proposed which can play a complementary role to our trade union practice. In addition to wage issues, we may also have to take up issues like housing, etc. The urgent need to reorient our work among construction workers from ‘welfare board centric’ one to ‘class struggle centric’ and centred around the struggles against the state for increased benefits was also emphasised. New code has already proposed abolition of construction welfare board itself. Scheme workers are identified to be the sections of working class in turmoil and churning and was emphasized to give priority to organize them. We have a federation in railways which is the only Left federation as on date. Called upon all units to make special efforts to organize them both in urban and rural areas. At the same time, streamlining the new federation and also taking up issues of politicization was also stressed.

It was also pointed out that integrating political slogans and demands with the movement and mobilizing workers on struggles in large numbers are best way of politicization. At the same time, we may have to form ‘forums’ for the purpose politicization of working class along class lines not just along party lines. The forums may also be a tool to fight growing rightist influences among workers. Forums may also have to take up non-economic issues and demands in addition to directly political issues in order to attract mass of workers. Study circles, reading groups, film shows and festivals, undertaking social investigations on a regular basis, regular classes on exploitation, profit, surplus value, state, etc., based on a syllabus, addressing issues of social dignity and gender violence, forming SAMMAAN, taking up housing and other issues, organizing the unorganized in select cases, etc., may be operating terrains of forums. If individual unions focused on struggle against exploitation and specific employers and if the trade union centre focused on struggles against the state and on policy related matters, forums may have to focus on politicization of working class. That may be a basic unit of working class work mainly in grassroots. It was also emphasized to study various aspects of politicization as elaborated in the paper on politicization.

He also said that fundamental departure of present amendment to labour laws is that it protected ‘capital’ instead of ‘labour’. He also said that codes are blocking or closing the avenues of legal remedy of workers issues. He suggested grasping the preamble of AICCTU which is like a manifesto of our working class work to understand revolutionary trade unionism represented by us.

The workshop also decided to organize larger protests and rallies at state level as a culmination of campaign against latest attacks of Modi led BJP government at the centre.

It was also decided to organize such workshops at state level to involve more and more activists and workers.