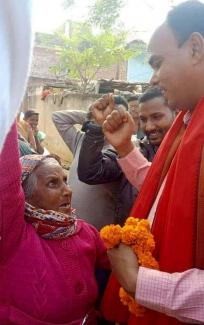 THE CPIML congratulates the people of Jharkhand on handing a resounding defeat to the BJP and said that it is our collective responsibility to rid Jharkhand of the mob violence, starvation, migration, unemployment, wrong domicile policy and other disasters inflicted on the State by the BJP. Re-elected CPIML MLA Vinod Singh will take direct initiatives to this end.

The CPIML thanks the people of Giridih District for their support. The victory we have got in Bagodar is a big responsibility for us. We will redouble our efforts to serve the people of Bagodar Assembly constituency and the people of the State of Jharkhand. We shall always be at the forefront of struggles against the fascist attacks perpetrated by the BJP in the country.

Comrade Vinod Singh has said that he will bring a resolution in the Jharkhand Assembly that the National Population Register (NPR), National Register of Citizens (NRC) and Citizenship Amendment Act (CAA) should not be implemented in the State.

CPIML in Jharkhand Assembly will demand to the new government for speedy fulfillment of the long-pending demands of migrant workers and all contract workers including para teachers. We will put forth in the Assembly demands for dignity for adivasis and end of state atrocities perpetrated by the BJP, and withdrawal of sedition cased slapped on Pathalgadi and adivasi movement activists. We shall put pressure on the government for employment, ration, pension, and housing. We shall leave no stone unturned for the protection of democratic-constitutional rights of the people.