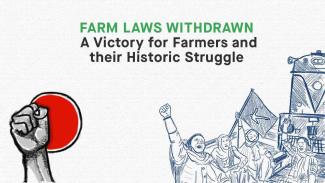 Faced with the one of largest protests in the recent history of independent India, Modi government on 19 November announced the withdrawal of three farm laws. The three laws- the Farmers' Produce Trade and Commerce (Promotion and Facilitation) Act, 2020; the Farmers Empowerment and Protection) Agreement on Price Assurance and Farm Services Act 2020; and the Essential Commodities (Amendment) Act, 2020 were passed by the parliament in 2020 despite massive opposition by farmers.

CPI(ML) General Secretary Dipankar Bhattacharya, saluting the farmers' movement, noted that the arrogant Modi regime has been pushed back by the heroic struggle and sacrifices of the farmers to repeal the anti-farmer farm laws. “Now it's for workers and citizens to force the government to roll back CAA, Labour codes and Asset Sale," he added.

Rajaram Singh, General Secretary, All India Kisan Mahasabha said that the victory is dedicated to hundreds of farmers who sacrificed their lives during the year-long farmers' movement.

“It is a big victory. The movement will continue till the anti-farmer three laws are officially repealed in the upcoming parliament session,  MSP guarantee law is passed and fabricated cases filed against leaders and members of various farmers' unions are withdrawn,” Rajaram Singh added.

Purushottam Sharma, National Secretary, All India Kisan Mahasabha said, “with the announcement of withdrawal of the farm laws, the lies that the Modi government has been relentlessly peddling about the laws and about the protesting farmers, stand exposed. For a year,  PM Modi used all the repressive machineries under his disposal to break the farmers protest and also ran a sustained campaign of lies to discredit the historic movement at the behest of his corporate cronies.”

Purushottam Sharma noted that people will not forget the sacrifices of martyred farmers and the farmers' movement will continue till the perpetrators of massacres against farmers are arrested.  He also said that Union Minister of State for Home Affairs Ajay Mishra Teni must be dismissed for his role in Lakhimpur Kheri massacre.

Kavita Krishnan, politburo member of CPI(ML) said that PM Modi had called protesting farmers anti national for a year, but when UP polls loom large Modi finally panics & blinks - but minus any grace.

“He apologises to the nation for withdrawing the Farm Laws, not to farmers for the hellish year he forced on them, which killed so many of them!” added Kavita Krishnan.

More than 600 farmers have lost their lives during the farmers movement. To crush the farmers; movement, Modi government in the Centre and BJP governments in Uttar Pradesh and Haryana displayed some of the most brutal forms of violence ever witnessed in independent India. With the help of the Media propaganda, Modi government tried to brand the protestors as 'terrorist', foreign-funded agents' and what not. Even the martyrs who lost their lives as part of the historic movement were not spared by the vitriolic smear campaigns run by the embedded media houses.

Despite all the repressive tactics, farmers' movement stood ground and intensified their struggle.

The movement also witnessed inspiring solidarity among various sections of the society with workers, students and youth marching hand-in-hand with the farmers against the corporate loot of the country. This victory proves that the people and their collective will are the driving force to defeat pro corporate and anti people policies.

On November 26, 2021 farmers and workers will observe the one year anniversary of the historic farmers' march to Delhi.