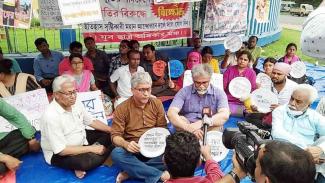 Com. Dipankar Bhattacharya along with Comrades Abhijit Mazumdar, Jayatu Deshmukh, Kartick Pal and Somenath Chatterjee expressed their support and solidarity for the ongoing SSC struggle in West Bengal. The battle in its second phase entered its 273rd day under the banner of Yubo-Chhatro Adhikar Mancha (Platform for Student-Youth Rights) and is going on uninterrupted at the Gandhi Statue near the Kolkata Maidan despite heavy police restrictions and occasional repression.

A few thousand teachers-in-waiting who have cleared the West Bengal School Service Commission are still awaiting their appointment as teachers in government schools for several years now. Meanwhile the list is being manipulated and select candidates are being picked up for appointment on the basis of considerations other than the merit list.

One of the most brazen cases of manipulation concerns the Minister of State for Education Mr. Paresh Adhikari whose daughter was appointed out of turn two years ago. The High Court has dismissed the appointment and the minister accused of irregularities in appointment is facing a CBI probe. The least the TMC government should have done was to drop him and the other accused minister Partha Chattopadhyay from the cabinet, instead the government is trying to stop the agitation of the SSC approved would be teachers.

It is the historic protracted battle of these teachers-in-waiting which has actually exposed the appointment scam and forced the government to make some token recruitments.