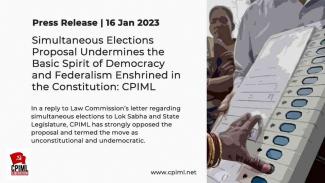 Text of CPIML’s reply dated 16 January 2023 to the communication  from the Law Commission seeking views on the proposal of Simultaneous Elections.

We are in receipt of your letter dated 23rd December 2022, seeking our views on the question of holding simultaneous elections to the Lok Sabha and State Legislatures. We have carefully examined the Law Commission’s Draft Report on “Simultaneous Elections” dated 30th August 2018. It is our considered opinion that this push for simultaneous elections, rather ‘One Nation, One Election’, which is the pet idea of the BJP is wholly unconstitutional and will ring the death knell for democracy and federalism in the country. Today in the name of ‘One Nation, One Election’ the BJP wants to set the political clock back and enforce a regimentation of the polity through constitutional amendments. Unfortunately. the Law Commission, seems to have been swayed by the BJP’s agenda.

Following the adoption of the Constitution when our Republic began its journey as a parliamentary democracy, Lok Sabha and Assembly elections were held simultaneously. If the calendar changed by the second half of the 1960s, it was not because of any constitutional amendment. This was how the polity evolved. The overwhelming domination of the Congress began to erode, and as old parties split and new parties emerged and political realignments took shape, we witnessed a proliferation of parties, and the arrival of mid-term elections and coalition governments. The Law Commission’s own observation indicates this (para 2.2): “The main reason behind the synchronised elections till then was the dominance and rule by one National political party and the regional parties were not powerful and influential.”

The fact that the BJP today has acquired the kind of electoral dominance that the Congress used to enjoy fifty years ago cannot be the basis for amending the Constitution and turning the clock back. The BJP of course openly harbours the ambition of becoming India’s ruling party, in fact the only party, for the next fifty years. But the constitution must not be amended to suit the ruling party’s political ambitions.

Assembly and Parliament elections have their own specific contexts as do the panchayat and municipal elections. Clubbing elections together for logistical considerations will mean stripping Assembly elections of their autonomous domain and making them subordinated to the central context.

The assumption that holding simultaneous elections would make for logistical convenience and financial savings is not backed by any credible study or analysis of election expenses or logistical arrangements. It is our opinion that the concerns being invoked to justify ‘One Nation, One Election’ are unsubstantiated and misplaced.

It is argued that frequent elections lead to massive expenditure and that from financial considerations “implementing simultaneous elections seem to be not only feasible but also desirable” (para 2.13). However, the Law Commission draft report itself acknowledges that “the data available does not clearly spell out the exact cost analysis” (para 2.7). This brings into question any conclusions drawn by the Law Commission on financial implications.

As per the draft report about 3586 crores was the cost incurred by the ECI on the 2014 elections (para 2.10). To put this in perspective, since the BJP came to power at the Centre in 2014, the Union government has spent Rs. 3,260.79 crore on advertising in electronic media and Rs. 3,230.77 crore on advertising in print media. If money is truly to be saved, the scope clearly lies elsewhere. Expenditure cannot be made a prime consideration in pursuing the core principles of democracy.

The assumption that holding simultaneous elections would make for logistical convenience and financial savings is not backed by any credible study or analysis of election expenses or logistical arrangements.

The Law Commission makes a rather disingenuous argument around MCC to seek justification for its proposal for simultaneous elections. This is rife with blatant contradictions.

The Law Commission clarifies that as per the MCC only new projects or programmes, or concessions or financial grants in any form or promises thereof etc., which have the potential of influencing the voters in favour of the ruling party, are restricted and that ongoing projects, for which beneficiaries have been identified prior to the MCC becoming operative, remain unaffected. It is further clarified that the ECI does not refuse approval for schemes undertaken for dealing with emergencies, calamities, welfare measures for the aged, etc., and concludes that “MCC cannot be blamed for a complete administrative paralysis”. (para 2.21) and then to conclude quite to the contrary in the very next para in speculation that the “Government(s) may defer such schemes till the completion of the election process, thus slowing down the pace of their ambitious work.” (para 2.22). Here too the Law Commission merely paraphrases BJP’s written submissions at page 145.

Model code of conduct does not interrupt or slow down development; it only places certain restrictions on the government to stop it from influencing the voters with announcements of new projects and policies. Elections enable the people to have a say and express their opinion about a government or its so-called development activities. Portrayal of MCC as an impediment to development militates against the centrality of the people in a democracy by privileging governance over the people’s right to choose their representatives and express their opinion about any government and its performance or so-called development agenda.

We believe that the idea of simultaneous elections is contrary to the spirit and principles of democracy and federalism, and as such violates constitutional morality and the basic structure of the Constitution.

The Law Commission undertakes an exercise in erroneous legal interpretation of the doctrine of basic structure with the intention of limiting its scope. The Law Commission concludes that the meaning/extent of Basic Structure needs to be construed in view of the specific provision(s) under consideration, its object and purpose, and the consequences of its denial on the integrity of the Constitution as a fundamental instrument of governance of the country. (para 6.29).

The draft Report references M. Nagaraj vs Union of India and Ors [AIR 2007 SC 71], where the Supreme Court held that axioms like secularism, democracy, reasonableness, social justice, etc. are overarching principles which provide linking factor for principles of fundamental rights like Articles 14, 19 and 21, and are beyond the amending power of Parliament (para 6.19). In the same judgment, it is held as follows:

The principle of constitutional morality basically means to bow down to the norms of the Constitution and not to act in a manner which would become violative of the rule of law or reflectible of action in an arbitrary manner. It actually works at the fulcrum and guides as a laser beam in institution building. The traditions and conventions have to grow to sustain the value of such a morality. The democratic values survive and become successful where the people at large and the persons-in-charge of the institution are strictly guided by the constitutional parameters without paving the path of deviancy and reflecting in action the primary concern to maintain institutional integrity and the requisite constitutional restraints.

60. Constitutional morality is that fulcrum which acts as an essential check upon the high functionaries and citizens alike, as experience has shown that unbridled power without any checks and balances would result in a despotic and tyrannical situation which is antithetical to the very idea of democracy.

The Law Commission, in its bid to justify the wide-ranging amendments to the Constitution to facilitate simultaneous elections, has unnecessarily sought to play down the right to vote, and the right to elect in Indian jurisprudence. It concludes that, in view of the above judicial pronouncements, the right to vote and the right to contest election are not fundamental rights and constitutional rights, given further shape by the Representation of People Act, 1951, thereby also making them statutory rights (para 6.43). By this reasoning it is argued that it is not part of the basic structure of the Constitution.

This leap in legal logic is without any basis whatsoever. Indeed, the Supreme Court in State (NCT of Delhi) v. Union of India [(2018) 8 SCALE 72] (Jst. Chandrachud’s opinion) has held that:

308. The basic structure doctrine was evolved by judicial interpretation in Kesavananda [Kesavananda Bharati v. State of Kerala, (1973) 4 SCC 225] to ensure that the fundamentals of constitutional governance are not effaced by the exercise of the constituent power to amend the Constitution. The postulate of the doctrine is that there are values which are so fundamental and intrinsic to the democratic way of life, a republican form of Government and to the preservation of basic human freedoms, that these must lie outside the power of legislative majorities to override by the exercise of constituent powers. The doctrine was a warning to “a fledgling democracy of the perils of brute majoritarianism”.

The right to vote, and the right to elect, surely is fundamental and intrinsic to the democratic way of life and a republican form of Government that these must lie outside the power of legislative majorities to override by the exercise of constituent powers.

In Kuldip Nayar and Ors. v. Union of India and Ors. [(2006) 7 SCC 1] it was held that parliamentary democracy and multi-party system are an inherent part of the basic structure of the Indian Constitution.

In People's Union for Civil Liberties and Ors. vs. Union of India (UOI) and Ors. [(2009) 3 SCC 200], it was held that democracy is a part of the basic structure of our Constitution and rule of law and free and fair election are basic features of democracy.

In People's Union for Civil Liberties and Ors. vs. Union of India (UOI) and Ors. [(2013) 10 SCC 1] it was held that free and fair election is integral to the basic structure of the Constitution.

We therefore appeal to the Law Commission to desist from pursuing this unwarranted and potentially disastrous idea.