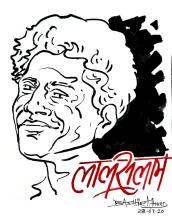 Fifty years have elapsed since the death of Comrade Charu Mazumdar in Kolkata's Lalbazar police lock-up. Back then, the Indian state must have heaved a huge sigh of relief, expecting his death to mark the end of the revolutionary wave that had spread across India in the wake of Naxalbari. But five decades later, when the Modi regime seeks to suppress every voice of dissent, it has to concoct the term 'urban naxal' to persecute dissent. Clearly, the spectre of Naxalbari and Charu Mazumdar continues to haunt India's rulers even five decades after his death.

Consolidate the Historic Victory of the Farmers’ Movement!

Strengthen the CPI(ML) to Intensify the Battle against Fascism!

Major questions of history are resolved through people’s struggles on the streets. These words of Comrade Vinod Mishra have once again been proved right in our experience.

CPIML General Secretary Dipankar Bhattacharya said that our fight today is against the lies and falsification of history by BJP.

Hundreds of CPIML activists bid a final farewell to their beloved leader Comrade Brij Bihari Pandey on 27 August 2021 with the pledge to carry forward the struggle for change. The final journey started from the legislative party office in Patna at 3 pm and proceeded through various parts of the city to reach Baans Ghat.