The Bihar Verdict and Its Resonance for India 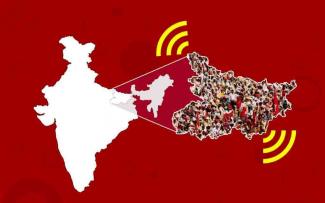 The first major elections held in the shadow of Covid19 pandemic and its complement, the brutal lockdown and its disastrous aftermath, have produced a stunning outcome. Till as late as early October when nominations began for the elections, opinion polls were predicting an emphatic majority for the NDA in Bihar. It was expected to be an easy cakewalk for Narendra Modi and Nitish Kumar, nobody gave the opposition even an outside chance. A month later, most exit polls however  predicted a clear edge for the RJD-Left-INC opposition alliance. The final results allowed the NDA a fortuitous escape to snatch a narrow victory from the jaws of an almost certain defeat. The eventual difference between the NDA and the grand alliance was only about 12,000 votes and slender victories in a dozen seats for the NDA. There are widespread doubts and complaints about the vote counting process, especially the counting of postal ballots, and the Election Commission must dispel these doubts.

The credit for turning the elections into a veritable people's movement goes primarily to the youth of Bihar who transcended caste boundaries and voted overwhelmingly against the NDA. The formation of the RJD-Left-INC alliance with the CPI(ML) contesting from 19 seats, and the Left as a whole from 29 seats, and the focus on secure and dignified employment and other issues of immediate and basic concern like public health, education, livelihood, agriculture, wages and social security as the core election agenda changed the entire election climate. Even though the alliance fell marginally short of the majority mark, the emergence of a powerful opposition must itself be seen as a powerful rebuff to the BJP's design of opposition-free democracy and one-party rule. And the impact of this outcome could already be felt when shortly after the swearing in of the new cabinet Narendra Modi and Nitish Kumar had to drop a tainted MLA they wanted to inflict on Bihar as the state's education minister.

BJP propagandists are trying to interpret the Bihar outcome as a pro-Modi verdict. Much like they had described the 2017 UP election results as popular endorsement for the demonetisation disaster, they now want us to believe that the Bihar outcome marks the electorate's approval for the Modi government's handling of the Covid19 pandemic and the new laws enforcing complete corporate control over agriculture and aggressive privatisation of industry, infrastructure, education, healthcare and other public services. Nothing can be a bigger travesty of truth. The Bihar verdict marks not just a massive rejection of Nitish Kumar, it also reflects growing anger against the disastrous policies of the Modi government. It should be remembered that in 2010, four years before the advent of the Modi era the BJP had already won 91 seats in Bihar; the tally came down to 53 in 2015 when the BJP did not have the support of Nitish Kumar, and this time with renewed support of JDU and two more allies, the tally went up to 74, seventeen seats less than its 2010 peak. However, it is the JDU that has had to bear the brunt of the people's fury and a much weakened Nitish Kumar now holds office at the mercy of an increasingly emboldened and aggressive BJP.

A very encouraging political sign of the Bihar outcome is the electoral expansion and resurgence of the CPI(ML) and the rise of a 16-member Left contingent in Bihar Assembly. Top BJP leaders unleashed a virulent slander campaign targeting the CPI(ML) as an anti-national force, branded CPI(ML) young candidates as a 'tukde tukde gang', and seven of our eight candidates in the first phase registered comprehensive victories in the face of this volley of malicious lies. Comrade Amarjeet Kushwaha, honorary President of Revolutionary Youth Association, who has been in jail in a false case since 2015 elections and had to contest from jail, won with a convincing margin. Thumping victories of leaders of the radical student and youth movement - AISA leader and former JNUSU GS Comrade Sandeep Saurabh from Paliganj, Patna, RYA All India President Comrade Manoj Manzil from Agiaon (SC), Bhojpur, RYA Bihar President Ajit Kushwaha from Dumraon, Buxar - secured through highly spirited, inspiring campaigns involving hundreds of local activists indicate great potential for a powerful youth movement against the fascist offensive of the Modi government. The CPI(ML) must make every effort to realise this potential with the help of the enlarged team of CPI(ML) legislators in Bihar.

Bihar has underlined the tremendous urgency and importance of the task of resisting the BJP in the electoral arena and combating its ideological and political aggression. Bihar has also pointed to the pivotal role of the revolutionary Left in this battle for the future of India and Indian democracy. And the job of the communists is not just to lend ideological courage, clarity and consistency to the battle for democracy but, equally importantly, to provide and develop the organisational muscle and grassroot work to check the BJP's corrosive influence and disastrous politics on the ground. The RSS has copied the communist style of work and organisation to mislead the masses with its ideological diet of hate, lies and rumour. Communists must strengthen their work on the ground and the network of mass political communication to build effective resistance to the BJP and the Sangh brigade on the ground. The next round of election battles, especially in West Bengal and Assam, is of crucial importance and we must use the lessons of Bihar to stop the BJP, strengthen the Left and save democracy.