'If People are Lynched for Not Saying Jai Shree Ram, I Will Certainly Protest' 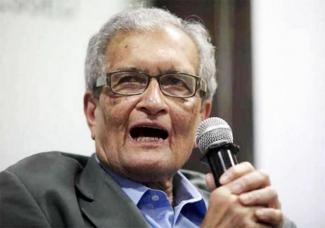 (Nobel Laureate Amartya Sen's comments against the use of Jai Shree Ram as a murder cry by Sanghi lynch mobs have predictably rattled the Sangh brigade. Meghalaya Governor Tathagata Ray has asked Sen to confine himself to Economics and not comment on issues of culture and politics. Sen responds to this reaction in this topical interview published in the Bengali daily Anandabazar Patrika (13 July, 2019). Below we carry some excerpts translated from the Bengali original.)

Question: You have recently said that the Jai Shree Ram slogan is not a part of Bengali culture. The response to your remark is that any culture is ever changing and why it will not incorporate new things? Then what is the problem with Jai Shree Ram slogan?

Answer: I don't have any problem with Jai Shree Ram slogan. But, of course, I have a problem with people getting lynched and killed for not saying Jai Shree Ram. One can easily say that Jai Shree Ram phrase is not part of the contemporary Bengali parlance. But that doesn't mean that it can't be incorporated. But if the reason for incorporation is to kill Muslims, of course I have a problem with that. The question is not which new word or phrase can be added to Bengali language. But rather the question is why that change is happening. And if people get lynched and killed because of this change, we have valid reasons to protest that. I have never said that new words can't be added to Bengali language, and the real question is not about that.

Answer: If we go back to past, it was primarily Buddhist regime in Bengal region, Gour and Banga. Dhramapal, Debpal et al. Then came the Sen regime, and after that the Muslim rule started. Dineshchandra Sen has written that the Muslim Sultans initiated the process of translating Ramayana or Mahabharata, from Sanskrit to Bengali. There was not much religious connection. I believe that our spiritual connection with Ram was not that much. But there may be several reasons for the frenzy around the figure of Ram. I have heard that the Meghalaya Governor is coming to teach me Bengali! Probably then I will know the reasons! But the religious connotation around the figure of Ram is surprising. In entire India, the Ramayana is not a religious text like the Upanishad. Primarily, it is an epic. In this epic, there are also criticisms of Ram's several actions. For example, Jabali cautions Ram for his wrongdoing. When Ram is again and again forcing Sita for agnipariksha, several others disagreed. These things are there in Ramayana only. We must think how suddenly the King of Ayodhya has turned into a God. And this is not only for Bengal, but for everywhere in the country.

Among those who have criticised me, one of them has said that we say Ram Ram when we are afraid of something. I haven't experienced that yet, but probably he has. If I meet him and he says Ram Ram, perhaps I will get an idea that he is afraid of something.

Question: Those who are unhappy with your remarks have also asked about your definition of Bengali culture. What is actually Bengali culture for you?

Answer: I am not claiming that I have offered a comprehensive thesis on this. Bengali language, Bengali rituals, discourses and the connections between them- we can consider as part of Bengali civilization. It is not a closed thing and if anyone wants to bring something new, I have no problem. Like for instance, Rampurhat, Ramakrishna et al may come into discussion very easily. But I also know some people just love to bash others who disagree with them. It is difficult for me to answer whether I have any right to speak about Bengali culture and civilization. I have spoken and written about this multiple times. So, I am not sure whether I will learn something new from our respected Governor!

Question: After the result of this year's election, there was a question that whether any politics around the Bengali identity or Bengali nationalism is possible in front of the aggressive Hindu identity? Those people from the so-called lower strata, who formed their own organization outside the discourses of Hindutva, have voted this time keeping in mind their Hindu identity.

Answer: If east Bengal managed to curb the rise of communalism, why is it not possible in West Bengal? But this is also right that the upper caste Bengali Hindus have kept the other sections of Bengalis in different strata, and expressed suspicion about their Bengali identity. Bengali upper strata didn't want to give respect to Muslims and Dalits. BJP leadership, of course, doesnt give any respect to Muslims and Dalits. They have easily exploited this division in the time of political conflict. This space was created by the already existing division in Bengali culture.

For the political sanity and progress of West Bengal, we need to do different things. One of them is the necessity of strong political organisation. Lenin has discussed about the presence of strong party for political organisation, I think that is very important. You cant fight political war without organisation. For war, you need army and for political war, you need organisation. And the party must be very enthusiastic. We need to change the existing state of affairs. If you don't believe something even yourself, stop saying that to others. Those who don't consider BJP as very good but dream to destroy Trinamool with the help of BJP  there are serious problems with this thought process. This doesn't mean you ignore the misuse of political power by the Trinamool.

Question: Is the situation of communal tension and fear across the country more dangerous than riots?

Answer: I am not saying that there is something more dangerous than the riots. But there may be, that's not impossible, but I can't think about that kind of horrible frenzy. But we must not be happy because there are no riots. Torturing people, lynching and killing people because of particular food habits, the madness in all of these, though may not be comparable with riots, but we must not tolerate these things. To tolerate intolerable behaviour is not a marker of a civilised society.