From Feudal Mahajans To The "Bandhan" Of Micro Finance Institutions

Mahajans as an institution for lending money at usurious interest rates came in to being in the feudal times. They made women part with gold – the only means of savings they had. They were infamous for insisting on payment of interest rather than the principal amount so as to perpetuate their tyranny. The Mahajans were like leeches for the masses. They excelled in “turning adverse conditions for the masses in to their advantage” in droughts, famines or even personal tragedies. So much like the modern times!

Marathi folklore, the rebellion shahiri of Comrade Annabhau Sathe whose birth centenary is this year, Comrade Amar Shaikh, Mahatma Jyotirao Phule, all exposed the ‘Savkari- Sahukari’ usury and extortion, as did many films of the 1940s-60s. There were spontaneous resistance movements against the sahukari in rural India, including a movement to burn the mortgage papers and loan agreements in the colonial times in Maharashtra. The ‘Patri Sarkar’ of 1942 was probably the first armed resistance movement which carved out a ‘Free” territory in some districts of western Maharashtra with elimination of Savkari as a programmatic slogan.

The phase of imperfect capitalist development set rolling in independent India had realized the need to broad basing the sections supporting it. The need for expanding the rural credit supply for creating the market for the industrial products was also becoming evident to capital. The rumblings of the social reformers and various anti-sahukari movements was also making its impact. In the overall interest of the capitalist class, banks were nationalized and the credit lines started flowing to hitherto untouched but ‘creditworthy’ sections developed during the process of capitalist development. This still left the multitudes in the lower strata of rural and urban proletariat. This expansion continued till 1990s and beyond under sloganeering of Garibi Hatao and welfare state and later Reforms and Liberalization.

While this was happening in early 70s a new model of financing the lower strata particularly the women was being developed in India’s neighbor Bangladesh under the name of Grameen Bank. In India a different model under the SHG- Self Help Group - was being tried. The two models differ in their way of operating but are conceptually the same.

The Micro Finance Institutions were a part of the schemes in both the countries. Similar projects were underway in Indonesia as well. However the class, caste, regional, cultural, social and other differences were much more complex in the Indian context. The only common thread was the “social commitment” of the women folk in particular to repay any loan undertaken with “social stigma” attached to defaulters. This “social collateral” was very cleverly used by the micro finance institutions, apex banks and later the private MFIs, now given even banking licenses, in place of tangible assets as the norm in banking industry.

In the 1990s, after India’s ruling class forced the country’s economy on the neo liberal path, it is no coincidence that NABARD which was very tentatively in to SHGs became very active in promotion of SHGs. The declared objective was of giving affordable loans to women, financial empowerment and independence. Women were to be encouraged to become entrepreneurs, produce and sell their products by organizing markets to sell these products. Two of the biggest MFIs with thousands of crores transactions – Bandhan and Bharat Financial Inclusion (formerly SKS) – are both founded by former members of NGOs in the field of MF. They started as for Not for profit NGO. They learnt the “Art of Exploitation” in NGOs, one in Bangladesh and another in India! Very revealing fact! More about this later in the article.

The MFI and SHG movement is actively encouraged by the World Bank, one of the axis of the world finance capital. Most of the MFIs have sizable investments by foreign venture funds and others from USA, Singapore. These MFIs ensure very high return on investments sometimes charging as high as 60 % burden on the SHGs or women participants. With coercive methods deployed they ensure that most of the loans are paid on time. Thus the profits are high and the debt trap leads to increasing number of women are members of multiple SHGs linked to different MFIs. Thus the horizontal spread is ensured as well. These MFIs are again becoming bolder and many of them have been given banking licenses in recent times. All this points to the possibility of the public sector banks wriggling themselves of providing funding to the rural economy and women in general and linkage to the SHGs in particular. The private sector banks are likely to be city and metro centric with serving the industrial, commercial and speculative financial needs. The women in general and the SHGs seem to be planned to be handed over to these MFIs turned Banks monopolizing the credit and dictating high interest rates charged. They will be ‘empowered’ to use any methods they like to serve the agenda of the global and local finance capital- maximize profits, expand financialization.

The anger against predatory MFIs is growing, as witnessed in vigorous protests all over India even during the pandemic and lockdown. We must do all we can to hold the Government accountable to stop this modern-day usury. 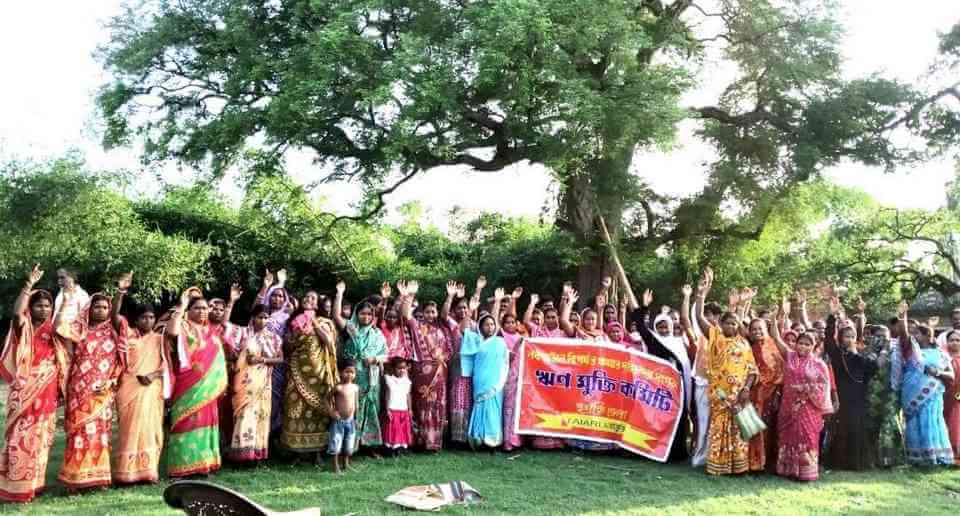 Both the notoriously predatory SKS/BFI, and Bandhan which is now growing in notoriety, have similar NGO origins, making a journey from “non-profit” pretensions to open profiteering.

SKS (now known as Bharat Financial Inclusion) was founded in 1997 by Vikram Akula, who served as its executive chair until November 2011. Akula recounted having worked with an NGO in India as a loan officer on the field in 1997. The potential for impact that these loans had given him the idea of setting up SKS as a more scaled up version for micro finance. BFIL was started as a non-profit NGO named Swaya Krishi Sangam (SKS Society) in 1997 by Vikram Akula. He formed it as a charity in 1998 in Hyderabad, India as a part of his PhD studies to explore the then nonexistent micro finance industry in India.

Though claimed to be based on the Grameen bank model, SKS granted high interest (36%) loans of Rs. 10,000 to R. 2 lakh to men and women in Andhra Pradesh belonging to poor families (as compared to Grameen bank which grants income producing loans at 20% APR). However, unlike Grameen bank, SKS used an aggressive commission based system to encourage loans, thus forming a network of loan marketers who were not direct employees of SKS, but worked on a commission basis in smaller villages of Andhra Pradesh. SKS used a network of loan sharks to pursue matters with defaulters.

In 2003, Vikram Akula created SKS Mutual Benefit Trusts (MBT) to change SKS Society into a for-profit entity named as SKS Microfinance. The trusts raised INR 20 million through donations as it was the minimum capital required to form an NBFC entity. With its invested capital, the trusts held 99.5% stake in SKS Microfinance. SKS Microfinance secured a Non-Banking Financial Company (NBFC) license in 2005 by the Reserve Bank of India.

In 2007, SKS Microfinance raised $11.5 million through equity investments led by Sequoia Capital. In 2008, it further raised $74.5 million through equity investments led by Sandstone Capital. On 28 July 2010, SKS Microfinance debuted on the Bombay Stock Exchange with an IPO that was oversubscribed 14 times. Muhammad Yunus, the Grameen Bank pioneer who won the Nobel Peace Prize, expressed concern that going public would put the demands of shareholders ahead of the poor. He added , "If they do it, I cannot stop them but I would encourage genuine Microcredit programs." In 2013 SKS operated in 13 states.

In September 2010, reports surfaced in the media of nearly 200 suicides by defaulters of a number of micro finance institutions, including SKS finance. This led to an enquiry by the Andhra Pradesh government. In 2011, the micro finance industry (MFI) in India suffered a crisis due to the growing news of suicides by borrowers. In 2012, an independent investigation linked SKS employees to at least seven suicides of creditors in Andhra Pradesh. A second investigation said SKS may have been involved in two other suicide cases. In 2012, SKS Microfinance cut 1200 jobs and closed 78 branches in Andhra Pradesh. Interviews with family members of the deceased, by BBC suggested that the reason for these suicides appeared to be large sub-prime loans taken by the villagers, with the active encouragement of SKS loan agents.

In 2014, the investors in the SKS Microfinance, Mauritius Unitus Corporation, Sequoia Capital India Growth Investments and SKS Mutual Benefit Trust as well as its founder Vikam Akula relinquished their roles as promoters. In 2016, SKS Microfinance was renamed Bharat Financial Inclusion Ltd. In 2017, the company launched a loan approval system based on Aadhaar to reduce the time and cost involved in the loan approval process. In the same year, it also launched its Kirana store (general store) service which allowed its customers to do financial transactions by visiting its designated stores. Later in 2017, the company entered into discussions of a possible merger with IndusInd Bank. The merger received approvals from Reserve Bank of India, National Stock Exchange of India and Bombay Stock Exchange later in 2018.

Bandhan Bank is a subsidiary of Bandhan Financial Holdings Limited. Bandhan Banking and financial services, Kolkata is present in 34 out of 37 states and UT, 4559 banking outlets and 2.03 crore customers with focus on Eastern and North Eastern states.

Like SKS, Bandhan started in 2001 as a not-for-profit enterprise providing microloans to the underprivileged sections of the society. Bandhan CEO C S Ghosh got a degree from Dhaka University, then joined BRAC, an NGO in Bangladesh. After returning to India, Ghosh worked with several NGOs. He quit his last job at Village Welfare Society and established Bandhan-Konnagar, a NGO in West Bengal, which aimed to provide microfinance services to the marginalized and drive financial inclusion.

In 2006, Bandhan acquired an NBFC. It turned into an NBFC-MFI. In 2010, Bandhan was recognized as the largest MFI in the country. In June 2015 it was granted license for a Universal Bank. Its public shareholders then included International Finance Corporation; an arm of GIC, the sovereign wealth fund of Singapore; and Small Industries Development Bank of India. On March 27, 2018, Bandhan Bank got listed on the bourses and became the 8th largest bank in India by market capital, on the day of listing itself. GRUH Finance officially merged into Bandhan Bank on October 17, 2019, and the combined balance sheet in the bank's Q2 results crossed the Rs.1 lakh crore mark. HDFC received shares for parting with Gruh Finance. HDFC has over 30 % FI investment.