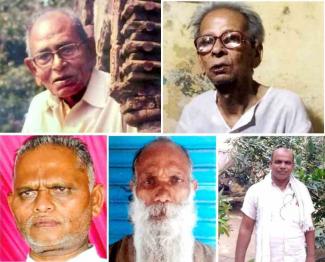 Comrade Guddu Paswan was a resident of Edaura village. There was a long-standing dispute regarding fazil ceiling (ceiling surplus) land between his family and the family of Kamlesh Ojha. The dispute turned into a clash on 11 July on the question of sowing (ropani) the land. During the clash, Guddu Paswan was shot in the leg. He was referred by Ara Sadar Hospital to PMC, but he died due to excessive loss of blood. The entire Party stands in support and solidarity with the bereaved family in this hour of grief. Lal Salam, Guddu Paswan!

Comrade Congress Yadav, aged about 50 years, passed away due to a heart attack on the night of 9 July 2020. He was a resident of Dumariya village in Mohanpur Block. He is survived by his wife and four daughters, one son already having predeceased him. His untimely death leaves the bereaved family grief-stricken. He always stood in firm support of the Party and played an important role in all Party programs. He was very generous and unstinting in financial contributions. The Party will always remember Comrade Congress Yadav and his commitment and dedication.

Comrade Tetari Devi from Gyanpur village in Koilvar Block passed away at the age of 55 on 30 June 2020 after a long illness. She belonged to a middle class family. She always stood steadfastly with the Party and was a dedicated member of the Party. Her husband also works as a whole-timer for the Party. Tetari Devi’s demise is an irreparable loss for the Party and leaves a void which can never be filled. The CPIML stands with the bereaved family in their hour of grief.

Comrade Maridandiah Budha, who played an important role in the CPIML in its formative stages in Karnataka and built a strong Union of Coolie workers of Mysore, passed away on 10th July at his residence in Mysore.

Comrade Budha suffered from diabetes and succumbed to a brain tumour after a prolonged illness. He was in the midst of all progressive movements - Dalit, Women, Communist, Human rights and all social movements - in the state, specially in Mysore for more than three decades. As a president of Karnataka Coolie Workers Union he was held in high esteem amongst the working class and the civil society of Mysore.

Leading a simple life, Comrade Budha was always ready with public-spirited help and solidarity to factory workers, sanitation workers, and all sections of the working class.

Comrade Buddha never even used a bicycle to move all around Mysore, reaching different offices to help workers who had sought his help. Travelling in the city buses was a passion for this man with passion for service to mankind. In the 1990s when he contested Loksabha elections as an independent but with the support of CPI-ML liberation, he fetched more than 5000 votes - this speaks of his stature amongst the working class and common masses.

In him, people’s movements lost a committed comrade, whose commitment towards social upliftment of the downtrodden was total and for whom communism was a way of life. One week before he breathed his last, Comrade Budha had told his mother to cover his body with the Red Shawl. His wish was honoured when hundreds of comrades bid him final farewell, and when he was finally laid to rest at Mysore, amidst slogans of Long live Revolution.

Comrade Krishna was suffering from typhoid for some days and was having breathing problems. No hospital in Ara or Patna would admit him, and he was brought back home. On 21 July he was referred By Piro Hospital to Jamuhar Hospital. But even as the reference papers reached his home, he passed away. He was 49 years old. It is a matter of great distress that he was not admitted in the hospitals at Ara and Patna.

Comrade Krishna joined the Party in 2018-19 and remained steadfast till his last breath. He was invaluable to his family as well as to the Party, a wise and dedicated activist. He gave the Party everything in his power. His untimely demise is an irreparable loss for the Party. We stand with his family in this hour of grief and loss, and pledge to carry on his work and realize his dreams.

Comrade Shantanu Bakshi, popularly known as Bakshida, passed away in his Bardhaman home on 26 June. He was 83 and was recently diagnosed with cancer. Comrade Bakshida was part of the vanguard workers of Durgapur Steel Plant who had served as the bulwark of the CPI(ML) since the turbulent years of the Naxalbari movement. He was a pillar of support for the Party during the post-setback reorganisation in 1974 and the subsequent years of consolidation. He was popular among Durgapur workers and employees for his social concerns and activism. He played a key role in arranging health care for needy people under the banner of 'Dr Norman Bethune Seba Samiti' (Dr Norman Bethune Service Centre). Comrade Bakshida was also active on the cultural front, he used to play a leading role in the 1960s in the theatre 'Angaar' based on the lives of coal mines workers. Liberation pays respectful homage to Comrade Shantanu Bakshi for his lifelong contribution to the revolutionary communist movement.

Comrade Tarun Prakash Kundu, popularly known as Japan da, of Bankura, West Bengal, breathed his last on 24 July evening. He was 76. He was a popular face of CPI(ML) in Bankura town. In the 1980s, he had contested municipal polls under the banner of Indian People's Front. He used to run a small shop and his shop was the communication and meeting centre for the Party in the initial years before a Party office was set up, thanks again to Comrade Japanda's persistent initiative and efforts. Even as ill health confined him to home in his last few years, his mental involvement and support remain unfaded as ever. Liberation pays revolutionary tribute to his dedicated and tireless communist legacy.