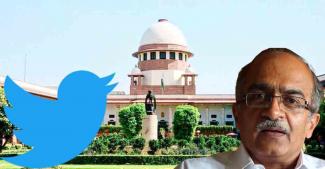 THE recent judgment on Prashant Bhushan is one that arouses dismay and anguish. Given by the bench comprising of Justices Arun Mishra, B.R Gavai, and Krishna Murari, the judgement holds Prashant Bhushan guilty of ‘contempt of court’ for his tweets. The first tweet says “CJI rides a 50 lakh motorcycle belonging to a BJP leader at Raj Bhavan, Nagpur, without a mask or a helmet, at a time when he keeps the SC in lockdown mode denying citizens their fundamental right to access justice!” This has been found as contemptuous because the court opined that the line which says that CJI kept the Supreme Court in lockdown mode, denying citizens access to justice is “patently false” even to Prashant Bhushan’s “own knowledge”.

What is strange here is the fact that the opinion presented by Prashant Bhushan has been presented by a large section of society many a times. The present government has been fairly criticized on many occasions for the unplanned lockdown and the migrant workers tragedy, as has the Supreme Court for not taking cognizance of the matter. Individuals, publications and jurists alike have talked about the migrants’ issues which caused unprecedented misery and issues of life and dignity. In fact, the Court did not bother to hold the present government accountable for blatantly lying in the court regarding no migrant workers being present on the road when everyone under the sky was aware of the apathy towards migrants during the pandemic.

Then, the question which becomes important is why a Suo Motu action in the present case, in particular? The Supreme Court failed to take necessary Suo Motu action in cases where it was much needed. Something as serious as Police reforms in regard to rampant cases of Police brutality, reported and unreported, did not make it to the list of issues which could be considered important enough to be taken notice of. To remind my readers, it took 11 years for the state of Tamil Nadu to act on the words of The Supreme Court in Prakash Singh v. Union of India (2006) which talked of robust setup for accountability. And guess what? No contempt charges were levied on the government for not abiding by the Courts’ words Prakash Singh’s case.

The second tweet says “When historians in future look back at the last 6 years to see how democracy has been destroyed in India even without a formal Emergency, they will particularly mark the role of Supreme Court in this destruction, & more particularly the role of the last four CJIs.”

It is evident that the Supreme Court itself believes that the Emergency era has been the darkest era of the Indian democracy but at the same time fails to see the challenges to democracy posed by the present Government. There has been undue delay in hearing on issues like abrogation of Article 370, Electoral Bonds or Citizenship Amendment Act, 2019. On 12th January 2018, a similar opinion was reflected when the four senior most judges of the Supreme Court said that many “less than desirable” things have taken place and unless this institution is preserved “democracy will not survive in this country.” The judges released a letter which alleged that there have been instances where cases having far-reaching consequences for the nation and the institution had been assigned by the Chief Justice of India selectively to the benches of “their preference” without any rational basis of such assignment.

Also, this judgment comes at a time when the dissent is alarmingly being criminalized by the state. People are being arrested under draconian laws like UAPA or sedition, for merely exercising their right to freedom of speech and protest. It makes us wonder if the judiciary after taking the role of mute spectator now is turning into the part of establishment which tries to curb dissenting opinions.

The power of the Judiciary to take punitive action against Contempt is embedded in the colonial history of England, just as legislators are endowed by our colonial masters with the penal provision for Sedition. The doctrine of Contempt of Court was a provision to serve and protect the might of the Crown. It comes from a time when divinely-ordained monarchies used to rule and should be treated for what it is – an archaic law in a modern democracy.

Countries like U.K, Australia and New Zealand have provisions like the Contempt of Court but it is employed in cases where there is ‘real risk’. A remote possibility that some action may lessen the public confidence in the judiciary will not suffice for this law to be put into use. A similar condition is in under the law in U.S. which requires “clear and present danger” to the administration of justice.

“The truth is of course that public institution in a free society must stand upon their own merits: they cannot be propped up if their conduct does not command the respect and confidence of the community; if their conduct justifies the respect and confidence of a community they do not need the protection of special rules to protect them from the criticisms.”

Although, in case of P.N. Dua v Shiv Shankar and Others, the Court clearly held that mere criticism of the Court does not amount to contempt of court, the reality remains that because of no objective criterion been set for a Contempt case to be made, it is often used authoritatively by the Courts. The jailing of Justice Karnan, a sitting High Court judge is another instance of the highhanded use of the Contempt of Court law. Do we need a law that allows for such judicial arbitrariness? This is a question we, the people of India, need to ask. The existence of colonial laws like sedition and contempt of court in itself is not in keeping with the precepts of a free spirited democracy.