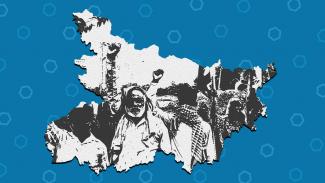 Power-hungry BJP which hijacked power in Bihar in 2017 by colluding with Nitish Kumar against the emphatic anti-BJP 2015 mandate of the people of Bihar, had thought it could steal the Bihar elections again by using Covid19 and the lockdown as shields for the NDA. But the anger and determination of the people on the ground against the arrogant misrule and betrayal of the Nitish Kumar government has clearly rattled the BJP and the party is trying to scare the people against the RJD-Left-INC Mahagathbandhan and especially the presence of the CPI(ML) in the alliance.

What makes the BJP so jittery and desperate? The BJP clearly has no answer to the questions that are uppermost in people's minds in these elections. It needs bogeys to divert the attention of the people and it hopes it can invoke the CPI(ML) as a bogey to cover up the fear the BJP has spread throughout the country through its disastrous policies, hate-filled politics and cruel and repressive governance. The people of Bihar have reasons to fear the BJP for all that it is doing in neighbouring UP where Yogi Adityanath Raj is marked not by peace and prosperity but rapes and repression, mob lynching, fake encounters and complete collapse of rule of law.

What has been the track record of the CPI(ML) in the electoral arena? The CPI(ML) made its mark in Bihar in the late 1980s as the party which resisted booth-capturing and inspired and empowered the landless poor and disenfranchised Dalits to exercise their right to vote. Dalits had to face a massacre in Bhojpur after their first vote, but they succeeded in sending Comrade Rameshwar Prasad to Parliament as the first ML MP in 1989. The other CPI(ML) leader to have been elected to Lok Sabha in four consecutive elections was Dr. Jayanta Rongpi from the Autonomous District constituency in Assam.

Who have been the CPI(ML) MLAs in Bihar and Jharkhand? Comrade Ram Naresh Ram, the iconic communist leader of Bhojpur who won three successive elections from Sahar; Comrade Yogeshwar Gope, legendary leader of state government employees movement in Bihar, Comrade Mahendra Singh, the boldest voice of the people in Jharkhand who was assassinated during the 2005 elections just after nomination, well known peasant leaders like Chandradeep Singh, Amarnath Yadav, Rajaram Singh, Arun Singh and Sudama Prasad; agricultural labour leader Satyadev Ram; popular communist leader of Seemanchal, Mahboob Alam, popular Jharkhand leaders like Vinod Singh and Rajkumar Yadav - such has been the team of CPI(ML) members in Bihar and Jharkhand Assemblies.

Many BJP MLAs and MPs would mark an ignominious contrast to this illustrious list. Rape accused and convicted MLAs of the likes of Kuldeep Sengar, the likes of terror accused Pragya Thakur who glorifies Gandhi's assassin Godse, or Ministers like Giriraj Singh celebrating notorious massacre mastermind Brahmeshwar Singh as Bihar's Gandhi, and chief minister Yogi Adityanath misusing his position to drop all criminal charges against himself - the BJP can boast of such shameful examples that will go down in history as a disgrace to India's democracy.

The BJP is afraid of the poor and the oppressed finding a voice. Bihar knows how the BJP has all along stood with massacre perpetrators seeking to drown the oppressed and deprived people's quest for dignity, democracy and development in blood. The BJP just cannot stomach the fact that the poor have managed to withstand and defy this design and emerge as a fighting force energising Bihar's ongoing battle for change.

The 'mahagathbandhan' or grand alliance in Bihar marks the coming together of communist, socialist, and Congress streams of India's glorious movement for freedom. The ideological and organisational predecessors of BJP betrayed the freedom movement then by collaborating with the British rulers. Today they are trying to rule India like the 'bhure angrez' (brown sahibs) Bhagat Singh had warned us against - imposing a new company raj by turning Indian economy into an Adani-Ambani empire and silencing the voices of dissent and democracy with cruel draconian laws and repressive governance exactly as the colonial rulers did.

We have the inheritance of the freedom movement and democracy. We are the heirs of Bhagat Singh and Ambedkar who blazed the trail for social equality and people's emancipation. The RSS which was inspired by Mussolini and Hitler and wanted the Manusmriti to become the Constitution of modern India, remains fiercely opposed to India's secular, democratic inheritance and the quest for justice, freedom, equality and fraternity cherished in the Preamble to the Constitution.

Let the BJP dread the assertion of the poor and the oppressed people for their rights, and the coming together of forces in defence of democracy and the Constitution. Bihar is determined to punish the betrayers of the 2015 mandate, the destroyers of India's economy and the cruel and sadist architects of the lockdown that caused limitless pain and humiliation to the people of Bihar. The decisive hour for change has arrived and Bihar is ready to fight and win this battle.