The Historic Farmers’ Agitation at Delhi Borders against Company Raj 2.0 : An Eye-Witness Account 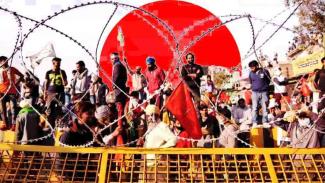 The farmers of the country are creating history. A history of resistance against Company Raj 2.0. And as citizen of a country that had gloriously fought back the British Company Raj and snatched our own independence, we, who are observing and participating in the present farmers’ agitation are proud successors of the legacy of resistance.

The present agitation is against the three anti-farmer agricultural acts passed by the parliament in September, when the country was still grappling with the Corona Virus pandemic and the economic disaster caused by unplanned lockdown. The three acts that the farmers are resisting are  Farmers (Empowerment and Protection) Agreement of Price Assurance and Farm Services Act, 2020; the Farmers Produce Trade and Commerce (Promotion and Facilitation) Act, 2020; and the Essential Commodities (Amendment) Act 2020. Along with these acts the proposed Electricity Amendment Bill that will cause disastrous for farming is also a point of contention. The governemnt has also brought an ordiance that holds farmers responsible for Air Pollution and has provision of fine and imprisonment for stubble burning.

The anger of the farmers of the country have been accumulating since the Modi government came to power. The first act as soon as the Modi governemnt came to power was to bring an ordinance for land grab. That was powerfully fought back by  the farmers of the country. Subsequently we saw energetic protest by the farmers of Maharshtra, MP and many other parts against the incresing burden of indebtedness due to non-commital approach of the government on MSP and increased cost of farming due to intensified corporate control on farming inputs.

Rather than addressing the demand of the farmers to control increased input cost, ensure MSP at the rate 150% of C2+ ( As recommended by Swaminathan Commission) and freedom from debt, the government brought acts that will tighten the control of corporate bodies over agricultural produce and farming land.

I, along with other student and trade union activists of Delhi are among all those who are witnessing and participating in the battle led by our farmers against Ambani-Adani Raj.

Farmer’s March to the National Capital

The workers and farmers of the country decided to comprehensively strike back against the anti-worker, anti-farmer policies of the governemnt on 26th and 27th November 2020. As workers from all over the country were observing nation wide strike against the disastrous wage code acts on 26th November, thousands of farmers from Punjab and Haryana started their march towards the national Capital. On 26th November when the Delhi Police was forcibly stopping a joint protest called by Trade Unions in Delhi Jantar Mantar, we were getting the encouraging news of the farmers’ forward march towards Delhi.

From 26th November onwards as the different unions of farmers started their journey towards Delhi, crackdown on leaders of farmers union started. As the march of farmers in tractors towards the National Capital entered Haryana, the BJP led Khattar Government of Haryana did all to stop the march. The marching farmers were treated as enemy and different roads towards Delhi that passed through Haryana were turned into war borders. Several rows of barricades were put up. Roads were dug by police to stop the march of farmers. Water cannons were used targeting them. Walls of heavy stones were constructed. But the courage and determination of the farmers to fight back the disastrous agri acts and reclaim their rights could not have been contained by these artificial barriers. Removing every barrier, the farmers reached the borders of Delhi on the adjoining night of 27-28th November.

Permission for Ramlila ground for gathering of the farmers was cancelled by the government. The farmers were instead asked to go to Burari ground at the extreme North corner of Delhi. The farmers unions rejected the proposal and started their sit-in protest at two borders of Delhi- the Singhu and the Tikri border.

Sunsequently farmers from UP started their sit-in at Gazipur border of Delhi. From 13th December onwards, farmers from Rajasthan had blocked the NH8, a road that connects Jaipur with Delhi.

The Farmers’ Agitation at Delhi Borders- A Nurture Ground for Democracy, Co-Operation and Resistance-

The protest sit-in of the farmers are a learning ground for collective decision making processes, coopeartion and communitarian way of living togther.

It is an amazing experience to see how thousands of people organised under several farmers uniosn are sitiing to protest anti-people policies of the governemnt and extending a cooperating hand to every one who is visiting their protest.

The farmers have reached Delhi in their tractors. At both the borders one can see lines of tractors extending to kilometres. These tractors are their resting place for night. As the temperature drops in Delhi with the progress of winter, the tractors that farmers use to till the land are going to be their place to rest for following months.

People from all courses of life, leaders of farmers' and workers' unions, lawyers, civil society members from all over the country speak from the stage throughout the day expressing solidarity. Cultural groups sing songs of struggles, telling stories of the relationship between farmers' and their land, citing histories attempted land grabs. Every two minutes the entire arena echoes with the uproars of slogans of unity.

The community kitchens at these protest sites are a lesson, if our parliamentarians want to learn, on ensuring that no one is left hungry. Three meals, with fruits and tea throughout the day, are served everyday for everyone. The women wake up at 4am and work in shifts to prepare the meals. Men also prepare food, breaking the traditional gender division of labour. Women are also leading the protest, managing the stage, giving speech and having a say on how the movement proceeds. Comrade Jasbir Kaur Natt among many other women leaders are inspiring us to cherish women’s role in the movement.

In the trolleys that the farmers have brought along are all the essential grains, pulses, vegetables, oil, jaggery etc for the sustenance of the protesters. It is the season of harvesting potatoes right now, one of the crops removed from the essential commodities list through the Essential Commodities Act 2020. Those farmers who had stayed back in their villages are harvesting their crops and coming to Delhi so that others can go back to do the same. These relays have established a direct connection between Delhi and the villages in Punjab. Women back in villages have been taking out morchas everyday to mobilise those who haven't joined the resistance yet.

Farmers along with fighting against these 3 bills have also taken upon the task of educating themselves on all the other similar policies that are aimed at privatization of public services. There are detailed dissections of the laws and policies brought forth by BJP which are meant to steal resources from the people and put them in the hands of specific corporates. They call these legislations a move towards establishing Corporate Raj in India. Farmers are demonstrating that they reject these laws and this agenda and are unflinching in their resistance against both.

The current protests are in line with the erstwhile Anti-CAA-NRC mass movement, with the citizens upholding the constitution while the BJP regime continues to enact policies to break down the foundations on which our nation has been built. Anyone who thinks that the farmers are misguided in their demands for complete retraction of all three bills should visit the protest sites, they might learn a thing or two about the implications of these bills not just on the farmers but even on the rest of the population.

The farmers of the country are leading a mass battle against the fascist rule at centre. They are giving us, the students, the workers, the women, the dalits, the minorities a hope. A hope that no matter how powerful the hate machinery of the government may be, the people united, can and will bring down the anti-people policies imposed on us by the rulers.