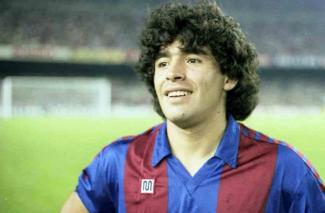 With Maradona’s death, a generation of football players from South America is slowly passing us by: a generation which includes greats like Garrincha, Zico and Socrates and Pele. This was a group of individuals who played the joga bonito (the beautiful game) the way they learnt it as kids in the slums of Rio, Sao Paulo and Buenos Aires. Their style not dictated by computer simulations and big data, they played football based on their instincts. This is what marked them out as great players. They saw an opening where no one else did, as if they had eyes at the back of their heads.

Diego Armando Maradona was born in a barrio (slum) on the outskirts of the Argentinian capital of Buenos Aires. His father who descended from a family of native Indians worked in a factory. His mother came from a family of Italian migrants. Maradona was what in Argentina is called a ‘negrito’, something which he remained acutely aware of throughout his life. Like many footballing greats, his skills with the ball were noticed before he entered his teens. He went on to sign up for Boca Juniors, a club traditionally supported by the working class. As news about his magical left foot spread across the world, he transferred to Barcelona and then to the Italian club of Napoli where he attained a demi-god status.

Maradona’s footballing skills could well be argued to be belonging to another planet. His being left footed made him all the more mystical. He could turn with the ball at the blink of an eye on the podgiest of grounds and move across the field at lightning speed. When he dribbled it seems as if the time had stopped and a million pair of eyes were glued to the ball between his feet. He played at a time when tackling from the back was a legal form of stopping players and referees were less inclined to protect players who would be naturally singled out by the opposition for ‘special treatment’. His greatness can be attributed to what the English footballer Gary Lineker described about Maradona’s  footballing skills, ‘He was always on first name terms with the ball’.

Outside the world of football, he lived a less than ideal life. As the journalist Niren Tolsi wrote, ‘his personal life was rendered chaotic by claustrophobic fame, narcissism, self-destruction, and excessive consumption of booze and drugs’. He did not acknowledge a son born outside his marriage for nearly three decades and his wife and his girlfriend accused him of harassment and violence. This aspect of his life remained with him nearly till his death. The other thing that remained constant in Maradona’s life was his politics.

Maradona’s coming of age in Argentina was also the time when the country was forced into accepting the notorious structural adjustment program of the IMF which dismantled the welfare net around Argentinian citizens, throwing millions into penury. The diktats of the ‘Chicago Boys’ along with a military dictatorship and the killing of young Argentinians in the Falkands War shaped Maradona’s politics. And the Maradona’s infamous ‘Hand of God’ followed by the Goal of the Century in the same match against the English in the 1986 World Cup perfectly summed up the North vs South divide that he fought against throughout his life.

His greatest footballing triumph outside the World Cup came with the Italian club, Napoli. The club based out of the southern Italian city of Naples were the perennial losers in the Italian League. The city itself has been destroyed several times by the volcanic eruptions of Mt Vesuvius, and its historical and geographical proximity with the African Continent and its warm climate meant that Neapolitans had darker skin color than the rest of Italy. This resulted in plenty of racist abuse when Napoli played in other parts of Italy. It was seen a city of disease and pestilence, dirty and dangerous. It came as a surprise that Maradona, the best player in the world, would chose such a team. It was a situation which he relished and under him Napoli ended the dominance of the Northern Italian teams of Juventus and Milan. Napoli reached heights which they have not seen since. He became an instant God in Naples; Eduardo Galeano in Soccer under Sun and Shadow describes, ‘..in Naples Maradona was Santa Maradona… in the streets they sold pictures of this divinity illuminate by the Virgin’. The victory of Napoli against Juventus and Milan was seen as a victory against the ‘Northern Bosses’; private entrepreneurs based in northern Italy who owned most of the Italian economy.

It did not come as a surprise that he publicly chose to display his tattoo of another famous Argentinian, Che Guevara. It was finally the doctors in Cuba, where he went at the invitation of Fidel Castro, who helped him kick his cocaine habit. But it was also a start of a friendship with extended to Hugo Chavez, Evo Morales and Lula. He participated in the protests against the Free Trade of the Americas in 2004 wearing a T-shirt which had ‘George Bush is a war criminal’ printed on it. He extended his support to the fight of the Palestinians against Israeli apartheid and remained a firm and vocal opposer of Northern Imperialism led by the United States.

In the decades of the 80s when it was slowly becoming clear that commercial interests were taking over governance of football, Maradona was the first opposition. In the 1986 World Cup, which was held in the Mexican heat, he opposed playing matches in the mid-day sun, in temperatures above 40 degrees. They were scheduled at that time because that was the ideal time for TV audiences in Europe. He demanded that football governing bodies open their books for scrutiny so that revenue earned could be passed on to impoverished players lower in the rungs. He even set up the International Professional Players Association along with George Weah of Liberia and Eric Cantona of France. As Galeano wrote, he was football’s ‘most strident rebel … He wasn’t the only disobedient player, but his was the voice that made the most offensive questions ring out loud and clear’.

But Maradona’s larger than life style of living had its consequences. His wife accused him of mental harassment and he was seen in a video hitting his last girlfriend Rocio Oliva. On the occasion of his testimonial match in 2001, on being asked about his drug and alcohol abuse, he publicly said, ‘I made mistakes, I paid for them’ but he never admitted nor expressed regret for his abusive behaviour with women despite evidence suggesting otherwise.

With all his flaws, Maradona will remain one of the brightest stars on football’s firmament.