Golden Jubilee of the Independence of Bangladesh 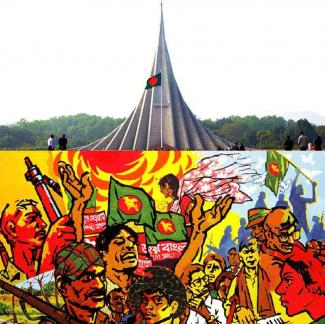 India’s eastern neighbour Bangladesh celebrates the golden jubilee of its independence on 26 March, 2021. The golden jubilee also coincides with the birth centenary of Bangabandhu Sheikh Mujibur Rahman, leader of the Bangladesh liberation war and founding President of the nation which successfully seceded from Pakistan in 1971. Separated from India as East Pakistan in August 1947, it took less than twenty-five years for the new nation to attain its independence from Pakistan as the bonds of language, culture and geography proved to be much stronger than religion and state-defined nationalism. The battle which began in 1952 over the rights of Bengali language as the mother-tongue of the people of East Pakistan grew into a full-scale national liberation war in two decades and led to the emergence of the nation-state of Bangladesh defying the imposed integument of the state-nation of Pakistan. The emergence of Bangladesh vindicated the centrality of language in the formation of national identities and remains an inspiring lesson for the current of national liberation struggles.

The international climate has of course undergone a sea change in the last five decades. The liberation war of Bangladesh had received strategic support not just from India but also from the Soviet Union which had effectively nullified any threat of American military intervention. That was also the era of the Vietnam war and national liberation struggles and revolutionary upswings in many parts of the world. One could clearly see the ideological imprint of that climate in the direction chosen by the new country – socialism, nationalism, secularism and democracy. But before the fledgling republic could consolidate the gains of liberation and overcome the huge economic challenges of rebuilding the economy, a series of military coups and political convulsions gripped Bangladesh. Sheikh Mujib and his family were assassinated, several of his cabinet colleagues were arrested and later killed and the secular democratic orientation of the new republic suffered an early setback.

Today much like the Indian state’s departure from the constitutional values and goals of secularism, democracy, justice, liberty, equality and fraternity, Bangladesh too is caught in a serious crisis of democracy. Amidst growing corruption, nepotism, chaos and misrule, fundamentalist forces and autocratic tendencies are on the rise. Elections are no longer considered fair and credible; dissenting citizens, writers and artists are being persecuted and even assassinated; and the state is unleashing severe repression and surveillance to curb democratic rights. The democratic opinion in India which had warmly supported and welcomed the liberation of Bangladesh fifty years ago and which is now having to resist a concerted fascist offensive at home wishes more power to the secular and progressive democratic forces of Bangladesh to steer the country ahead towards the promised goal of the liberation war.

In the domain of foreign policy, the relation between India and Bangladesh has generally been friendly and peaceful. As the biggest country in South Asia, India has the greatest responsibility to maintain an environment of friendship and cooperation in the region, and close Indo-Bangla bilateral ties are central to this regional perspective. The arrival of the Modi government has however posed a new challenge to these ties. While the two countries still await amicable solutions to outstanding issues of border security, water sharing, connectivity and trade, the discriminatory amendments made by the Modi government to India’s citizenship act have created a major trust deficit. The BJP’s entire political discourse in West Bengal, Assam and Tripura – Indian provinces bordering Bangladesh – revolves around the bogey of ‘influx of Bangladeshi infiltrators’ and the shrill cry to deport them. India’s Home Minister Amit Shah uses the word ‘termites’ to describe the alleged ‘infiltrators’, with the inescapable inference that the country must be saved by exterminating these termites.

Interestingly, the issue of this alleged infiltration does not figure in the bilateral agenda of the two countries. The NRC, which seeks to strip undocumented citizens of their citizenship rights, and the CAA which discriminates among undocumented citizens and documented refugees on the basis of religion, both use Bangladesh as a source of alleged illegal infiltration and religious persecution of minorities and fix statistical targets of deportation of infiltrators, only to create a permanent state of communal polarisation within India and intimidate India’s own minorities. Incidentally, the reported itinerary of Modi’s forthcoming Bangladesh visit includes visit to the shrines of the Matua community in Bangladesh around the same time as voting begins in West Bengal and Assam. The attempt to mix up foreign policy matters with domestic political calculations can only complicate and distort our foreign policy framework.

The emergence of Bangladesh was the most telling refutation of the two nation theory and the perilous project of defining nation and culture on the basis of religion. It was a historic moment of affirmation of diversity and dignity in democracy. It should be understood as a permanent warning against the absurd and disastrous implications of any attempt to reframe India’s plural mosaic as a monolithic entity, redefine multi-religious multi-cultural India as a Hindu nation, and paint democracy with a majoritarian Hindu-supremacist brush. For the Sangh-BJP establishment, the 1947 partition of India is not a tragic past that we must transcend and never repeat, but an unfinished project that needs to be reopened and completed. On the golden jubilee of the emergence of our eastern neighbour, we in India must resolve to have close friendly bilateral ties and learn from history to attain a better future.