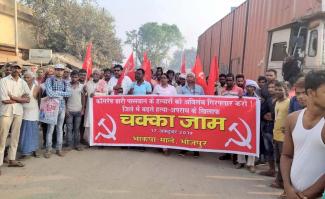 BHOJPUR district remained shut on 17 October in protest against the heinous murder of comrade Jhari Paswan (Suresh Paswan). He was killed by the unidentified motorcycle borne assailants on 15 October morning which undoubtedly is an outcome of strengthening criminal-mafia-politician nexus in the region. All the major highways in the district remained jammed for whole day was an expression of the great loss common people in the area felt with the death of their fighting comrade and leader.

From early morning onwards masses thronged the streets of the Terari, Garhani, Ara and other places including in distant villages and sat blocking the highways demanding arrest of the killers and an end to the criminal-mafia rule going on under the protection of the ruling parties' leaders. In particular they demanded an end to illegal sand mining and liquor trade in Bhojpur and whole of Bihar.

The protesters also raised slogans against the district administration which (as on previous occasions when popular CPIML leaders have been killed) remained a mute spectator. They also condemned the Nitish Kumar led JDU-BJP Government whose leaders still continue to issue statements tacitly favouring murderers of Comrade Jhari Paswan.

In Terari protesters blockaded road near bus stand leading to kilometers long traffic jam. In Piro town the Ara-Sasaram state highway was jammed near Lohiya Chowk. CPIML ex-MLA Chandradip Singh addressed the protesters here. He said that governments in Bihar and Delhi have failed utterly as far as people's issues are concerned while criminals and organised mafia have been given a free hand.

The Garhani-Tenduni road was jammed near Bharsara in Jagdishpur block and river bridge between Sahar-Arwal and road at Khaira remained blockaded for the day. CPIML leaders Upendra Bharati, Madan Singh and many others led people in this protest.

The road in Pawana in Agiaon block was also closed. The state highway 81 near Sandesh was blockaded since morning by thousands of people led by Parashuram Singh. CPIML Bhojpur district secretary Jawaharlal Singh said in Ara that the government has given a free hand to the criminals and feudals all over Bihar as a result whole of the state has become den of criminals. He asked the Nitish government why the killers of comrade Jhari Paswan have not yet been nabbed by the state police. He also thanked the people of Bhojpur district for participating and supporting the bandh call. The NH 30 in Ara town was closed due the bandh. CPIML central committee members Raju Yadav, MLA Sudama Prasad, Insaf Manch activist Quayamuddin Ansari, Ara city secretary Dilraj Pritam, AISA Bihar Secretary Shabbir Kumar led the bandh in Ara.

Ara-Sasaram highway at Garhani was blocked for many hours. CPIML CC member Manoj Manzil addressed the protesters here where he said that this shocking daylight murder of our comrade, like the recent murder of Comrade Arun Singh will only strengthen our resolve to fight the feudal and fascist forces.